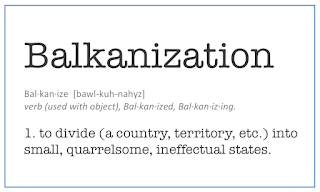 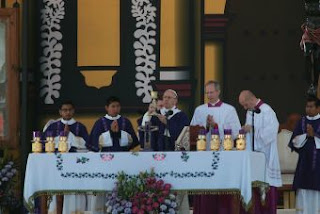 "Balkanization is a term used to describe the division or fragmentation of a state or region into smaller, often ethnically similar places. The term can also refer to the disintegration or break-up of other things such as companies, Internet websites or even neighborhoods."

The Liturgy of the Church in the East and the West prior to the Great Schism experienced a legitimate Balkanization.  The Liturgy for the most part developed under different cultural circumstances with different forms of language, chant and different spiritualities although remaining unified in what the Liturgy does.

After Vatican II in the revised Mass, the differences in rites of the Latin rite almost disappeared but a new and more virulent form of balkanization took place, the diversity of languages in which the Mass could be celebrated even when avoiding experimentation of any sort and following the liturgical laws set forth in the new Roman Missal.

But almost immediately a further balkinzation took place with different styles of music for the Mass not only in Mass settings but also songs sung at Mass.

So today, there is a great balkanization of the Mass in the same city, not only in terms of language but also in terms of styles of music. Often in the very same vernacular Masses are more different from one parish to the next in terms of what is sung and the style in which it is sung especially as it concerns instrumentation.

The Holy Father's pilgrimage to Mexico highlights this ongoing balkinzation of the Liturgy approved now implicitly by the Magisterium. The styles of music from Mass to Mass as well as dialects of language differ greatly and all this balkanization is attributed to legitimate inculturation.

Thus, why in the name of God and all that is Holy would anyone complain about the Extraordinary Form of the Mass being added to this liturgical stew? What is wrong with recovering the diversity of rites with their differences in the Latin Rite as was experienced prior to the Council? What's wrong with the Ordinariate's Old English and EF and Anglican sensibilities with their new Missal?

Why? because libs fear the EF. Once exposed to the the majesty and sacredness of the EF, the laity will realize how they have been cheated of their rightful patrimony. Diversity to libs, is a very superficial concept, skin color, etc. They fear diversity of ideas because the product they're selling doesn't hold up to close scrutiny

I am a "lib". At my state in life, my age, I do not fear the EF or the Latin Mass or chanting or incense or lace or fancy vestments or fancy churches or Traditionalists or conservatives or Republicans or ANYTHING...except maybe Newgene when he's "packing". I think he would be a danger to me....I love my life...I guess I'm afraid of something that could end it

In addition....I am not afraid of God....(Are you?) If we really believed what we say we believe, we would be looking forward to dying...eagerly. That doesn't seem to be the case though. Almost everybody does everything they can to hang on to life as long as they can....

@Gob
The fear of the Lord is the beginning of wisdom: and the knowledge of the holy is prudence.

So whatcha trying to say gob? What do you think of the TLM overall then?

gob, if you're a Dem, then you're a CINO (Catholic in Name Only). You are supporting a Party that slobbers and drools over an intrinsic evil, abortion. If Pius XI were alive today he would condemn the modern Dem Party just like he did the Nazis and Fascists. You're kind of a sad little man.

1) sodomy
2) contraception
3) abortion (plus embryo-killing research))
4) euthanasia
5) infanticide (in that abortionists regularly allow born infants to die and resisted all legislation against such ghoulish practices).

But once a man accepts as both politically expedient and a positive good to be advanced by government power some intrinsic evil like the intentional killing of the innocent and defenseless or sodomy, that man ceases to be honorable or good.

This says nothing about the GOP - Lord knows they've richly deserved the moniker of "stupid party" and there's certainly plenty of immoral individuals populating the ranks of the GOP Roosevelt and Rockefeller (and now Bush) tribes - but again, in terms of policy, despite their awfulness, they have yet to cross the threshold of declaring themselves 'for' intrinsic evils.

It is doubly disturbing that, in every election for the past 30 or more years, over 50 percent of Catholics have voted Democrat and sometimes it is as high as 60 percent. That alone might make one question whether the Holy Spirit is still guiding the Catholic Church. It isn't only abortion, it is the gay issue, for many Bishops and Priests in the Church quietly wish the Church would support gay marriage and openly gay Priests, and also the fact that the Church, despite the explicit statement in CCC against godless Communism and Socialism, enthusiastically embraces both worldwide.

TJM says, "You're kind of a sad little man."

Running away with the Ad Hominem Sweepstakes, he is!

Pelosi's Ghost, I am pitying you, an act of kindkness. As St. Thomas More said to Richard Rich "But for Wales?" Modern take: But for the Demtard Party?

TJM - Your pity is as worthless as a tit on a boar hog and your act of kindness is much the same. But since it pleases you to pretend being magnanimous, enjoy your day.

A tit on a boar hog would be very useful in this age of perverts and deviates. They could cuddle up to the boar and nurse while engaging in God knows what kind of disordered fantasies. Then, they could go to Mass and receive because, after all, who are we to judge? All of this unless, of course, the boar's sunny disposition took a turn...

Note the euphoria from some sectors over the Pope's quip "who am I to judge" which is typically accompanied with THEIR judging their erstwhile enemies as 'evil' homophobes... so once again it's the tactical relativism: they get to declare themselves beyond good and evil, in a state of being that cannot be judged while they get to judge all of humanity as 'evil' for begging to differ with their truth claims. It's a neat trick.

"It is doubly disturbing that, in every election for the past 30 or more years, over 50 percent of Catholics have voted Democrat and sometimes it is as high as 60 percent."

True. On the other hand, all the surveys I have seen show that for Catholics who attend Mass weekly or daily, their political and philosophical preference is predominately conservative, and their vote goes overwhelmingly to Republican candidates. Of course only 25-30% or less attend Mass frequently.

I know, George, but I'm not sure that helps us very much.