WE CAN KEEP DISGRUNTLED CATHOLICS IN THE CATHOLIC CHURCH BY GOOD LITURGIES, THAT'S THE GOOD NEWS, THE BAD NEWS IS THAT THEY HAVE BECOME POST-CATHOLICS BECAUSE OF POST VATICAN II BABBLE AND THE CULTURE THAT OPPOSES NATURAL LAW AND SCRIPTURE AND TRADITION! SO DO WE REALLY WANT OUR LITURGIES AND PEOPLE TO BE A "WHITED SEPLULCHRE?"?" 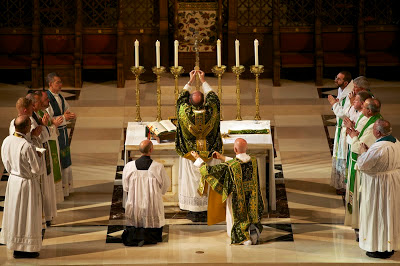 My Comments First: Yes, poor Philadelphia has had its problems and yes it can be traced to mismanagement of clergy by the former archbishops/cardinals of that once powerful and rich archdiocese. But even with the facade of power and spirituality there was deep seated corruption and clericalism in the clergy, both bishops and priests. The whited sepulchers of many of the clergy has led to a decline in Catholic belief in natural law, Scripture and Tradition, where cultural fads, sometimes coming from the devil, replace God given truths.

So, even if good liturgies keep bad Catholics in the Church, isn't that just as bad as good liturgies celebrated by corrupt clergy? Or, is having good liturgies with sinful clergy and laity the way to re-evangelize the corrupt? I have no answers, but it does appear that good liturgy and whatever that means, keeps corrupt people in the Church and even if the clergy are corrupt, the laity will give them a pass if the liturgy is good.

Many young Catholics are unhappy with the Vatican's attitude toward homosexuals and gay marriage.
Also from NewsWorks Tonight - June 17, 2013

Not surprisingly, a high percentage of area Catholics have left the church over the sexual abuse scandal that has rocked the organization in the past decade. But that's not all.

A Catholic parish in Philadelphia surveyed lapsed Catholics to find out why they left. The results show a dissatisfaction at both the local level and with the Vatican.

Of the 189 former Catholics who responded to the survey, the highest percentage — 17 percent — said they did so because of the priest abuse scandal. The director of the survey, Charles Zech of Villanova University's Center for the Study of Church Management, said a secondary reason follows close behind.

"People who are going to leave the church over the scandal and the church's handling of it have already left. So people leaving the church today are leaving for other reasons," said Zech. "A growing reason we found out was the church's attitude toward homosexuals and gay marriage. A lot of younger people object to the church's teaching on that."

The Catholic Church opposes gay marriage and the social acceptance of homosexulaity and same-sex relationshiops.

In the fall of 2012, Zech was hired by a parish in the Philadelphia Archdiocese to survey people who turned away. The study will not be made public, and Zech spoke on the condition that the parish would not be named.

According to a recent national study on religious life in America by the Pew Foundation, a third of baptized Catholics leave the faith, often due to policies originating in the Vatican. (MY COMMENT: Wouldn't it be better to tell the truth, they leave for policies originating from natural law, Scripture and Tradition, which the Vatican points out?)

Nevertheless, Zech's study shows that local churches have some power to keep disgruntled Catholics from leaving, such as improving the quality of liturgies.

"Liturgies are really important. I'm not sure that parish staff and clergy understand how important liturgies are to people, that they have good music and the liturgy be meaningful," said Zech. "People who feel they are not being fed by a meaningful liturgy — they'll go where they are being fed."

Most of those former parishioners became Protestants.

The Catholic Church, and Christianity in general, is not a popularity contest. Doctrine is not decided by polls. I hate articles like the one you quote.
I would rather have good Liturgy by a sinful Priest. The graces of the Liturgy still obtain and the Priest's sinfulness has no effect upon the majesty of God or the Sacrifice of the Mass.

Father, I was going to send you that picture you attached to this post. I am glad you've seen it. What an amazing picture of how beautiful concelebration can look when the orientation is correct!

My concurrent view to Gene is that it seems to conclude that people sense hypocrisy and are repelled by it. If we assume correctly that everyone in the Mass is a sinner, however recently absolved, then we should stick to the Truth, Natural Law, and Liturgy of the Ages while welcoming them in. People will be put off at first, but are drawn back to the beauty of the Holy Spirit and will eventually find that they are actually put off by the hideous nature of their sins. If we change to make them feel accepted as a sinner, instead of because they are a sinner, they can get that back home or with their friends. This is a form of healing and you can't get healed by diluting the medicine.

Absolutely NOT! The graces conferred in the Sacrament are not incumbent upon the personal holiness of the celebrant. To assume so is a terrible mistake. The Mass is bigger than the one celebrating it and it is the right of every Catholic to have a properly celebrated Mass.

To me, it doesn't matter if the priest is a felon or an earthly saint. If he celebrates the Mass as prescribed with no deviation from the rubrics or approved text, I can stand by it. Licety of the Mass is another question though.

"A Catholic parish in Philadelphia surveyed lapsed Catholics to find out why they left. The results show a dissatisfaction at both the local level and with the Vatican."

This is an invalid reason to leave the Church. The Church is larger than the leadership and if catechesis were properly taught, then the number of apostates would be smaller. We can come up with justifications and reasons and all the rest, but the bottom line is that the reason people leave the Church is purely a personal reason which is driven by subjectivism and fallen human frailty, as opposed to showing the fortitude necessary to weather the material happenings of the world and the leadership that gets caught up in being of the world as opposed to being in the world.

In the 1970s I was at odds with the Vatican. I was appalled by the way it treated great and holy servants of the Church such as Archbishop Lefebvre and Cardinal Mindzsenty. I found the reformed liturgy uninspiring, to say the least. I could have gone to the local Anglican church and heard better music in a medieval building. But I was intellectually convinced that the Catholic Church was the one founded by Jesus Christ, and that apostasy was out of the question. I also discovered that there were places that bucked the liturgical trend and that with a bit of effort you could find a decent Latin Mass, which kept me practising on a fairly regular basis. I knew things would get better.

When I heard of the clerical sex abuse scandals I was as appalled as anyone; when I discovered they reached their apogee in the 1970s I was not surprised.