The plans for their stunning new almost $9 million Church! 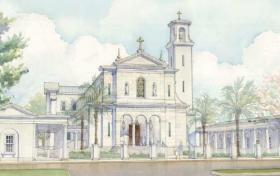 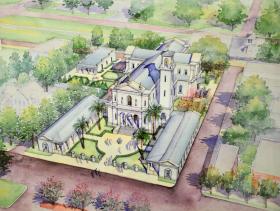 Their lovely old Church, which will be preserved and in addition to that, they have an even older smaller church next to it built in the 1800's which serves as their perpetual adoration chapel! 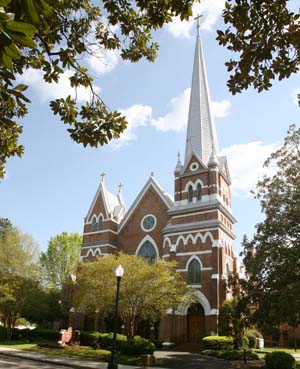 The Augusta Chronicle has a wonderful story on Aiken, South Carolina's plans to break ground for a new church building. You can read it here!

Saint Mary, Help of Christians Church (press here) is about 16 miles away from downtown Augusta where I was pastor of The Church of the Most Holy Trinity from 1991 to 2004. And of course I'm from Augusta. Aiken, South Carolina is a very well to do "horse town." In fact the horse that won the Belmont race last week lives and trains in Aiken! Aiken also has a huge number of nuclear scientists living there. The Savannah River Plant is there, which was built in the 1950's. Locals have always called it the bomb plant as it makes the major component for nuclear bombs. At its height during the cold war it employed almost 30,000 people. Today it no longer makes nuclear bombs as its primary mission is cleaning up the nuclear waste they have. In fact I glow in the dark! They are down to about 15,000 workers.

In 1962, when I was in the 4th grade, during the Cuban Missal Crisis, we Augustans knew that we would be the first to be annihilated by the Soviets when the nuclear war was to begin because of this bomb plant! As a 4th grader it was all very exciting and we practiced our "duck and cover" routine regularly. The day that the annihilation was to happen, my mother, with tears in her eyes as we were sent to school told us that if anything happened to come home right away! Oh, those where the days!