BOMBSHELL, THE HOLY FATHER, THE BISHOP OF ROME, POPE FRANCIS CONFIRMS THE MALE AND FATHERLY NATURE INTRINSIC TO THE PRIESTHOOD! 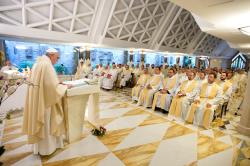 Thus in the Ordinary Magisterium of this Bishop of Rome, we have confirmed the true theological, doctrinal and dogmatic nature of the priesthood and it is fatherly!

From the lips of the Bishop of Rome:

(Vatican Radio) The desire to be a father is ingrained in all men, even priests, who are called to give life, care, protection to their spiritual children entrusted to them. This was the focus of Pope Francis homily at morning Mass Wednesday, in the chapel of Casa Santa Marta. Mass was concelebrated by the Cardinal Archbishop Emeritus of Palermo, Salvatore De Giorgi, who was celebrating the 60th anniversary of his priestly ordination. Emer McCarthy reports:

"When a man does not have this desire, something is missing in this man. Something is wrong. All of us, to exist, to become complete, in order to be mature, we need to feel the joy of fatherhood: even those of us who are celibate. Fatherhood is giving life to others, giving life, giving life… For us, it is pastoral paternity, spiritual fatherhood, but this is still giving life, this is still becoming fathers. "

"A father who knows what it means to protect his children. And this is a grace that we priests must ask for ourselves: to be a father, to be a father. The grace of fatherhood, of pastoral paternity, of spiritual paternity. We may have many sins, but this is commune sanctorum: We all have sins. But not having children, never becoming a father, it like an incomplete life: a life that stops half way. And therefore we have to be fathers. But it is a grace that the Lord gives. People say to us: 'Father, Father, Father ...'. They want us to be this, fathers, by the grace of pastoral fatherhood. "

MY FINAL COMMENTS: Of course the Holy Father knows that Pope John Paul II in his magisterium made it clear that no pope has the authority to ordain women--papal power is not monarchical and the pope can't change things that are unchangeable because he's not a monarch, he's a servant to Jesus Christ and His truths.

So, the case is settled isn't it. We move forward not backward. We might make mistakes in explaining this truth, but we move forward explaining it the best way we can, as Pope Francis has done this morning.

We're not moving backwards to controversies settled in the 1st century, the 3rd century or the last century. We move forward!! Move forward Oh people of God!

Is it your understanding that something a pope says in an extemporaneous homily during his personal morning Mass constitutes an official or magisterial statement or confirmation of Church doctrine or policy? If not, how might any such personal statement qualify as a "bombshell" (other than in a tabloid sense)?

It is a homily and low on magisterial substance and authority, but nonetheless shows forth the mind of the pope who takes for granted that only men can be ordained priests and uses the metaphor of father to back it up. It is implied not explicit. He's moving forward as the non ordination of women has been settled.

But surely there's no news here. The fact that the Church has no power to ordain women is de fide and (according to the CDF) infallibly taught. So there's nothing to discuss, nothing to even move on from; the "mind of the pope" could hardly be other than that of the Church. Thus, again, . . . No News Here, let alone a "bombshell".

But Henry, you know that progressives think that the Pope is going to welcome dialogue with the dissenting priests in Austria and move on gay marriage and women's ordination in terms of his theology of moving forward. But we are seeing from this pope that he expects fidelity to the Magisterium, the pope and our local bishops. This is bombshell news for those who think we have a liberal pope. He is liberal when it comes to social justice, the poor and going to the periphery, but with the truth, not some progressive post-Catholic version of it. Liturgically he is not Pope Benedict and is open to diversity, how much remains to be seen, but I don't think he is opposed to the EF Mass or communities outright.

Of course you know, Fr. McDonald, that I have no disagreement with anything you're saying, but I have some concern that these daily informal broadside statements may devalue the voice of the papacy, and that constant comment on settled matters feeds unintentionally into the progressives' expectation of dialogue. And that the peppershot expression of the pope's personal opinions feeds into their view that everything is just a matter of opinion. When in fact the pope, speaking as pope, has no right to purely personal opinions, to a mind of his own, when his voice as pope is that of the eternal Church, not merely that of the man who happens to be the pope at the moment.

I believe Henry's last statement is spot on. If issues are settled, no comment is needed...period.