THESE CAREERIST PRIESTS WITH THEIR OWN AGENDA ARE DOWN RIGHT SAD, DISGRACEFUL

The hippie priest of the 1960's, Fr. Daniel Berrigan would be proud! 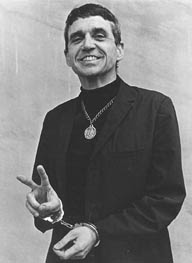 MY COMMENTS FIRST: I think that Pope Francis would consider the Association of U.S. Catholic Priests as careerists with their own agenda and in complete opposition to the Magisterium of Holy Mother Church. Their age, 70 and older betrays the mindset and their arrested development, still stuck in the 1970's. It is sad, sad. This article is from the National Chismatic Reporter, aka, NCR which you can read there too.

Reinstating general absolution in the United States, consultation in the selection process for bishops, studying the ordination of women and married men, and collegial exercise of church authority are among topics of 15 resolutions on the agenda of the second annual assembly of the fledgling Association of U.S. Catholic Priests June 24-27.

To be held at Seattle University, the gathering's theme -- "Lumen Gentium: God's Pilgrim People" -- is based on the Second Vatican Council's 1964 document, also known as the Dogmatic Constitution on the Church.

The association was formed following an Aug. 25, 2011, meeting of 27 self-described "Vatican II priests" from 15 dioceses and 11 states at Mundelein Seminary in Illinois, notes the group's website.

The organization's inaugural assembly in June 2012 drew 240 delegates from 55 dioceses to St. Leo University northeast of Tampa, Fla. Among its actions was approval of a letter of support to the Leadership Conference of Women Religious. LCWR remains under controversial Vatican control and directives for reform.

The association's board chair, Fr. Dave Cooper, said about the same number of attendees are expected at the Seattle conference.

Five keynote addresses will be scattered over the three-day Seattle conference. Fr. Patrick Brennan, director of development at Mayslake Ministries in Lombard, Ill., as well as director of the National Center for Evangelization and Parish Renewal in Chicago, will provide "a pastor's perspective" on Lumen Gentium, according to the event's program.

Catherine Clifford will offer a theological reflection. She is founding director of the Research Centre on Vatican II and 21st Century Catholicism at St. Paul University in Ottawa, Ontario, where she is also a professor of systematic and historical theology and vice dean of the theological faculty.

Two journalists -- Robert Blair Kaiser, who covered the Second Vatican Council for TIME magazine, and Robert Mickens, Vatican correspondent for The Tablet based in London -- will offer differing time vantages on Lumen Gentium and Vatican II.

The assembly will address the slate of 15 resolutions during its business sessions, Cooper told NCR. He added that a prioritizing effort was underway and it was possible that not all 15 could be considered at the Seattle meeting.

In addition to study of the expansion of ordination, a call for general absolution reinstatement, and an appeal for transparency and local consultation on the selection of bishops, the resolutions also:

Call for the exercise of church authority to be carried out "in a collegial manner," employing "a consensus decision making process."
Direct the association to "ask the Holy Father to grant permission to use the 1974 edition of the Sacramentary in the United States where desired."
Ask the association to support "a comprehensive plan for evangelization in the U.S.A.," including "diagnosis" of reasons Catholics have left the church and study of Christian churches that have seen rapid growth.
Request that the organization invite the U.S. bishops' conference to appoint a liaison to the association.
Call for the Seattle meeting's assembly to "decry the annual collection for the Archdiocese for Military Service for its rendering to Caesar what is to be rendered to God."

Asked how he might respond to those who would say the 15 resolutions sound like a party platform for the progressive wing of the Catholic church, Cooper said, "Well, that's what Vatican Council II embraced."

He said the organization is "growing slowly" and that "many priests do not know we even exist."

Confirming that the average age of members is about 70, Cooper said there has been resistance from younger, more recently ordained priests, some of whom "see us as disloyal if not downright dissenting."

Alluding to recent studies that have pointed to differing views of church and authority between older and younger generations of Catholic clergy, Cooper described "Vatican II priests" as viewing the priesthood in terms of "service, of washing the feet of others" in contrast to clerics who hold a "priest as ruler" model.

Cooper said the association is working hard to "build bridges" and to "hold hands with the laity and at the same time with the bishops."

"Sometimes it makes you feel like you are on the rack, being torn part," he said, adding that the association is "of, by and for priests." Its core work is "keeping alive the vision of the Second Vatican Council" and "offering support to our brother priests," he said.

Cooper said the association's first order of business was "writing a snail mail letter to every ordinary in the U.S. explaining who we are and what we are doing and our mission statement. We offered our respect and pledged cooperation."

Just reading about these pitiful guys, still hanging on with their dated voices from out of the past, makes me feel even older than I am. Because I actually remember when this silly stuff was au courant.

"...Cooper described 'Vatican II priests' as viewing the priesthood in terms of 'service, of washing the feet of others" in contrast to clerics who hold a "priest as ruler" model.'" Hahaha! If only they had spent more time washing feet and less time tearing down altar rails and throwing out catechisms! It is younger priests who tend to feel most bound to the decrees of VCII and to the Council's resulting Roman Missal, Code of Canon Law and Catechism of the Catholic, a feeling which helps prevent arbitrary rule in parishes.
That said, I might join if this group can get us a 40 hr work week and other union benefits!

What a collection of clowns. I assume Ignotus will be in attendance...

Ah, the Berrigans, Bernadette Devlin, Angela Davis, Jane Fonda, all the dope you could smoke, easy women, and do-it-yourself-college degrees. Like where all that has led...?