BOMBSHELL GOOD NEWS FROM ONE OF THE GANG OF 8 CONSULTERS TO POPE FRANCIS--CERTAINLY HE CONSULTED WITH THE HOLY FATHER ON THIS? 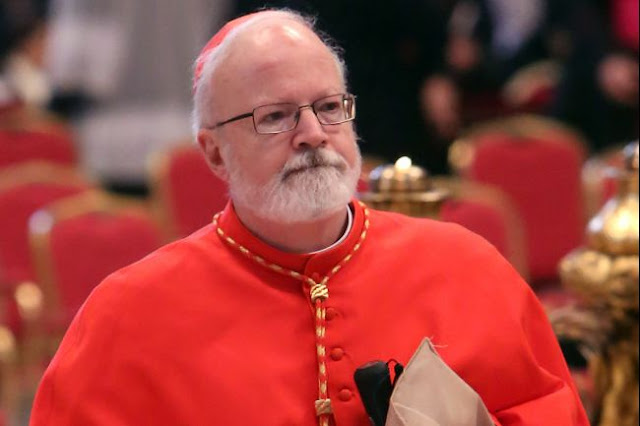 Pope Francis is constantly calling us forward rather than backwards. And God knows, and Pope Francis knows, none of us wants to go back to the theology of dissent of the 1960's and 70's, the most despicable era in the Catholic Church not only in terms of dissent but also moral corruption in terms of the sex abuse scandal of adolescent boys by Catholic priests and their enabling bishops. Certainly Cardinal O'Malley knows this better than anyone!

I am sure that the National Chismatic Reporter laments the good sense and orthodoxy of Cardinal Sean O'Malley but reports the good news anyway. You can read their article HERE. Will the NCR have the good grace, as did ultra conservative Michael Voris, to take the name "Catholic" out of their publication, since they are so schismatic and inline with the dissent of the Austrians in their opinions and doctrines? Progressives seldom are that sensitive when their own agenda and ideologies that Pope Francis so detests are at stake.

The first American speaking tour of a reform-minded Austrian priest has hit its first snag.

Last week, Boston Auxiliary Bishop Walter Edyvean called St. Susanna Parish -- Schüller's scheduled speaking stop for July 17 -- to inform them that O'Malley had ruled that "Father Schüller could not speak at any Catholic parish because he espouses beliefs that are contrary to the teachings of the Catholic church," according to parish Deacon Larry Bloom.

Schüller's talk will be moved to the First Church of Dedham, a Unitarian Universalist church down the street, Bloom wrote in an email to NCR Monday. (MY COMMENT: Unitarian Church is exactly where Schüller and his group belong, post-Catholics that they are they resemble Unitarians more than Catholics. )

Schüller is founder of the Austrian Priests' Initiative, a group of Austrian priests pushing for institutional reforms in the Catholic church. The group issued an "Appeal to Disobedience" in 2011, calling for (among other things) admission of women and married people to the Catholic priesthood.


MY COMMENT: AND THEN THIS BOMBSHELL INSIGHT FROM THE DISSIDENT DEACON LARRY BLOOM WHO ORGANIZED THE TALK IN HIS PARISH AND WITH HIS PASTOR'S PERMISSION I PRESUME:

"This, however, is the first time in my eleven years at the parish that we have actually been told we could not allow someone to speak at the parish," Bloom wrote. "We did not expect that the talk on parish property would be prohibited, but we were not shocked and proceeded calmly to complete a resolution."

"Cardinal O'Malley's action is particularly distressing since it is taken by one of the eight cardinals appointed to help reform Church governance," they said in the statement. "This attempt to suppress these long overdue discussions is a disservice to Christ's body."

MY FINAL JOYOUS COMMENT: You got that, not in eleven years has something like this happened, meaning in the reigns of two previous popes, John Paul II and the left's much vilivified serene Pope Emeritus Benedict XVI! And get also what this silly deacon is saying, that CARDINAL O'MALLEY'S ACTION IS PARTICULARLY DISTRESSING SINCE IT IS TAKEN BY ONE OF THE EIGHT CARDINALS APPOINTED TO HELP REFORM CHURCH GOVERNANCE!!!!!!!!!!!!

POPE FRANCIS, THE POPE OF MOVING FORWARD OUT OF THE 1960'S AND 70'S AND TOWARD CATHOLIC UNITY UNDER THE MAGISTERIUM AND FIDELITY TO IT, MEANING THE POPE AND OUR LOCAL BISHOPS. IT DOESN'T GET ANY BETTER THAN THIS FOLKS, NOT AT ALL!!!!!

This should send a clear message to the geriatric group of Association of Priests in the USA who also are longing to revive the dissenting 1960's and 70's!

Sorry, I couldn't even read the rest after you called Michael Voris an "ultra-traditionalist."

What planet are you living on? LOL!

My bad, meant to write ultra-conservative; it is fixed.

There ya go. That is much more accurate, I think.

If you believe Pope Francis is actually the pope, you're not an ultra-traditionalist.

Marc: Would you have objected if Fr. McDonald had called Michael Voris an "ultra-Catholic"?

I'm assuming that this was a local decision and had nothing to do with Rome.

It is purely conjecture on my part, but since this character is from Europe and fomenting dissent there and now here and because of the new status of Cardinal O'Malley, I would suspect that he would have consulted with the Holy Father on something that is trying to move to the international level of dissent, precisely what Pope Francis was elected to help prevent--ideologies at odds with the Magisterium and underlings trying to usurp authority away from the bishops, local bishops.

But since this character is so well known for his defiance and call to disobedience, it seems that O'Malley is acting in the way the new Holy Father wants local bishops to act in the face of such subterfuge and I suspect the Bishop of Rome will do much housecleaning in his own curia to prevent it from happening there too and what happened to his predecessor with these kinds of characters. The devil is truly on the prowl and the pope knows it.

I think the label of ultra has a negative and disobedient context here, considering Fr. McDonald was implying ChurchMilitant.tv, formerly RealCatholicTV, was properly treated in being forced to drop "Catholic" from its moniker.

That occurred because it was perceived as ultra-traditionalist.

As I see it, in order to be Catholic, one must necessarily be a Traditionalist. So, I see Michael Voris as Catholic, but not ultra-Catholic. He isn't a "Traditionalist" in the proper sense of that term, though. I think he is properly called a conservative Catholic because he thinks the Novus Ordo can be reformed with some aesthetic changes. Traditionalists generally recognize that is not the case due to tepee underlying doctrinal problems with the New Missal.

I guess I'm having trouble responding to your question because I don't know what you're trying to imply...

Glad to see that something is being done! Awesome news from Boston.

Since Cardinal O'Malley is one of the 8 cardinals helping to reform the curia, is this something we can expect more of?

I was having a talk just yesterday with a friend of mine who is coming into the Church, about what I think the Church might look like in 10 years, and just today Michael Voris had a video about waiting 10-15 for the "Angel of Death" to rid the Church of the problem clergy.

What are some peoples opinions on what the Church will look like in 10 years? I would be interested to see if they match up with my guesses.

Marc, "teepee underlying problems/" Do we have Indian problems now?

The Church in ten years...probably about as embattled as she is now. More pressure from Leftist/progressivist groups and the Leftist government to ordain homos and other deviates and women. More clamor about birth control, and more unbelief appearing in Priests and Bishops. The NO will still be horribly celebrated in most places, and more traditional Catholics will flee to FSSP and SSPX parishes. New Catholics will still be poorly catechized at RCIA programs that resemble talky tea-parties with little or no real doctrine taught...lots of "oh, just love everybody and be nice" social action garbage. I am not optimistic.

I think I might be a little bit more optimistic than you Gene, of course I could be wrong. I'm thinking the "biological solution" has to take effect eventually??

However, until that day comes, I will be getting all of my sacraments from a Latin Mass community

I think I am one of those ones that is going over to the FSSP or other Latin Mass communities. For the past couple of weeks I have been going over the different Rites in the Latin Church (Last Rites, Exorcism, Funeral, etc) and have decided that I can no longer receive any of these things from the N.O Rites, there is just to much of a difference. Although, I will 100% always stay in communion with my bishop and the pope. I guess that means I cannot go to the SSPX? Although I still have no gotten a complete answer on that.

Yes, Pin/Gene, teepees! You and people of your ilk have been oppressing our Native American brothers and sisters for too long! I care much more about that than doctrinal precision and fighting against heresy and abuse within the Church! You should personally pay reparations and feel more guilty!

Wait, sorry, I was possessed by the spirit of Pater Ignotus for a second. It was just my stupid autocorrect...

I think O'Malley got upset when the Irish weasel put his fingers in the Cardinal's face so, like all good referees, he blew the whistle on the next foul.

Good for him. I hope it gives the other seven ideas.

Since every priest has the option of using the older Rituale, you shouldn't have to rely on a priest from an exclusively Old Rite community. The revised Ritual is watered-down, ambiguous and ill-conceived; in short a complete dog's breakfast. I know priests who only celebrate the NO Mass but speak in disparaging terms of the newer ritual, and regard the so-called Book of Blessings with undisguised contempt.

I have at home a newly reprinted pocket-sized edition of the 1614 Rituale Romanum (Latin only) as reissued in 1925 and amended up to 1944, and shall insist on its use.

Well, Marc, you have made me feel so guilty that I am going to re-visit Rousseau's "noble savage" concepts and dig out my old "Bury My Heart at Wounded Knee" t-shirt. *sob, sob* Do you think if I attended Mass at Holy Spirit it would make me less insensitive to the plight of our Redskin brothers?

Father, with respect, these bombshells posts are bit like the boy who cried wolf.

Dymphna, No, it is like the boy who cried, "POPE!"

Ah these Catholics, how good they are at judging others. Jesus would not be happy.