THE WACKY LEFT, LEFT BEHIND 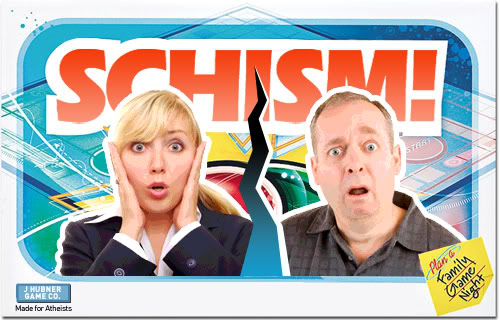 At a wacky-left mocking of a Catholic liturgy, during a so-called "ordination" of a womyn priest, the reporter stated the following:

Then Rue prayed: “May God bless you and keep you. May she be gracious to you. May she lift up the light of her countenance upon you. And may our good God give you peace.

“Mass has ended,” she intoned.

“And the service has just begun,” the group responded.

These sentences pretty much sums up the substance of the wacky left and what Pope Benedict decries as fundamentally, horizontalism. There is no substance and certainly no transubstantiation! But in that one sentence I was brought back to the 1970's seminary days when liturgy was manipulated for social change and fads concerning the liturgy were really promoted. It was so important that congregational members bake the bread for the liturgy, which often tasted more like honey buns than bread and created more problems in terms of storing it as it didn't have a very long shelf life.

The focus was always on the signs of the liturgy and seldom on Christ Himself. In fact there was a diminished belief in the "real presence" of Christ in favor of the real presence of the sign, whatever that sign.

Let me see, if I lived in a town that had a wacky-breakaway, schismatic, ceasing to be Catholic Church and a a Baptist Church only, which one would I attend? The Baptist Church!

And let me see, if there was only a wacky, schismatic far left so-called Catholic Church, and a SSPX Church, which one would I attend? You guessed it.

The wacky left and the righteous right are miles apart, it is true. But at least the righteous right is orthodox like the Orthodox Church and of the two, the SSPX and the Orthodox Church, which one is schismatic? The Orthodox one is, of course, but the SSPX isn't yet, but it has great potential, similar to the schism between east and west, but at least the SSPX, like the Orthodox, is orthodox in substance and in living every day Catholic life. The wacky left? They are post Catholic and have lost all semblance of Catholicism even in everyday life--they aren't Christian, they are WACKY.
Posted by Fr. Allan J. McDonald at Sunday, June 16, 2013

Father, have you ever attended a SSPX Mass? I don't go out of my way to attend them, but those I have, in France and Belgium (I was in Brussels four years ago and the only liturgical life I encountered was at the St Joseph Church in the Leopold quarter which is not just SSPX but is the Belgian national shrine) are to me mainstream Catholicism. The sermons, and this includes those at St Nic's in Paris are utterly orthodox, and I have never heard any criticism of the post-V2 Church from the pulpit.

Archbishop Lefebvre was a great and holy man and when you celebrate the Usus antiquior you might consider that without him you would not be allowed to do it.

I attended a wedding in a local Presbyterian church that had a similar ritual and was led by a female pastor. Lots of people around a big table, I don't know if it is an altar, and a big loaf of task looking bread loudly broken and passed around. The service was beautiful, the building and quire were, as well. The print of the service was obviously based on similar liturgy as ours, but many changed words and meanings. It almost seemed like someone had written a service based on photos of a Catholic Mass done from memory and modified to suit their intentions.

The Presbyterians have the guts and good manners to stand on their own, I can respect that. These people in post are pathetic by comparison to Protestants.

But Fr. McD, what would be your response if I told you that I have witnessed every "wacky" element mentioned in the excerpt in some Catholic Church that declares itself to be, and is accepted by Rome and the local bishop as being, in full communion with the Church? The only exception is that of a female priest.

1) I've heard a priest in RCIA deride the Real Presence and describe "the Body of Christ" as a statement referring to those receiving Communion.

2a) I've heard another priest adopt a strict gender-neutral way of referring to the First Person of the Trinity, saying in his homily, for instance, that God sent God's son to tell us about God because God loves God's children, and that God God'sself has thus walked among us. I am not kidding about this.

2b) I have quite often, as I know you probably have heard the laity make the response "May the Lord accept the sacrifice at your hands
for the praise and glory of GOD's name, for our good, and the good of all GOD's Church" (with GOD spoken very loudly to make sure nobody present missed the dissent).

3) Gluten-free (or at least very low-gluten) Hosts are sometimes used at Mass, aren't they? As well as extremely low-alcohol wine consisting mainly of grape must? (Please correct me if I'm wrong about this one.)

5) Certain priests I have heard at St. Joseph have made a point of the dismissal is to send Catholics into the world to evangelize through their Catholic lives and service. :-)

My point being, of course, that the elements you find so wacky in this dissenting group have found their way thoroughly into the mainstream of the Catholic Church. How many practices of the Trads have similarly influenced the post-VII Liturgy? And stuff that's always been there doesn't count. Neither does stuff that has been officially approved by the hierarchy, such as the Tridentine Mass or the return of "And with your spirit." We're talking about illicit and theologically wrong stuff creeping in. Oh, wait--I bet that even if such influence _has_ crept in, it isn't theologically wrong anyway, so no harm no foul.

In short, I restate my original thesis from a few days ago. Modernism is principally a movement, not a group, and as a movement it's far more dangerous than traditionalism, if only by its pervasiveness.

I invite others here to add to my list.

Anon 5, RE: #4 I am prepared to categorize the main stream protestant denominations as theologically "wacky" with the possible exception of the Baptists and some congregationalists. I would hardly call most mainstream Methodists, Presbyterians, Lutherans, Disciples, and Episcopalians other than marginally Christian, if that. Given that, and in reference to the thread on ecumenicism, how can one possibly "dialogue" with such divergent apostasies and errant theologies?

Anon5, that is ROFLicious, because "Lord" is at least as masculine a term as "his!" Do these people not realize that?

ytc: I think the understand very well, but are working to confuse the average pew sitter and either hijack meaning or replace it.

A5: I have been surrounded by those same folks as in 2B and heard priests interpret Gospel to take the miracle out of it: the loaves and walking on the water are favourites. It is particularly rampant among the EMHC.

I was in Michigan last weekend. We were at a music camp on Olivet College, a college loosely affiliated with Christianity. Beautiful setting with a very pretty church on the campus. They had a display in the lobby that lauded women of accomplishment, along with some notable quotes. They had Margaret Sanger among others, who define women in terms of their sexual independence. Their church was excited that we were camping there and invited BANJOS to come play at their service. I must say I was mightily tempted.

All of this is simply another aspect of the warning Pope Francis gave the Pelagians of the right: a simple imitation is only flattery, but is not valid without the content, relevance, understanding and Source. We are at the juncture of history where we will have to decide if we are going to keep the Church vital or allow it to become quaint.

John Nolan, a great and holy man wouldn't disobey his superiors' orders as Lefebvre repeatedly did. Sure, he thought he was doing what needed to be done, but the only time we're allowed to disobey legitimate authority is if they order us to commit sin. Lefebvre was never given any objectively sinful orders.

Gene: Good call. It was a Methodist establishment.

I assume your question re "dialoguing" was rhetorical, especially since you verbed a noun.

Anon 5, My Webster's (1966) lists "dialoguing" as v.t, to express in dialog. I will admit to it being an awkward usage, however. Yes, the question was rhetorical...

I think the instructive point is that a great and holy man did, in actual fact, find and think it necessary to ignore his superiors' instructions. To the benefit of the Church, for who can say that the present liturgical renewal--not just the reappearance of the TLM but, more importantly for the Church as a whole, the reform of the Novus Ordo--would now be underway without his leadership at that time.

What his example illustrates is that all such rules, however salutary in general, have valid exceptions in particular instances.

Henry, the fact that the TLM became more widespread after Archbishop Lefebvre's suspension and later excommunication simply shows that God makes good things come out of bad things, as He always does. It doesn't mean Lefebvre did a good thing. I mean, Judas' betrayal of Our Lord helped lead to our Redemption, but that doesn't mean Judas did a good thing by betraying Him. In fact, I would venture to say that Lefebvre hurt the cause of the Tridentine Mass by his disobedience and that perhaps we might have more of TLMs today if it weren't for his disobedience. Until Summorum Pontificum, bishops had to grant an indult for the TLM to be celebrated in their diocese, and many refused. Did they hate tradition? No doubt some did. But as for others, could it be that maybe, just maybe, they knew how prideful and disobedient the SSPX had been and were left with a bad taste in their mouth? Remember that some of the conditions for the indult were that those requesting a TLM had to accept the validity of the Vatican II and the Ordinary Form of the Mass and and not be associated with disobedient or schismatic movements. Perhaps many bishops were afraid of possible schism, heresy, etc. Let's face it -- while there have indeed been bishops who persecuted those who prefer the Extraordinary Form, traditionalists are often their own worst enemy.

In addition, while it's charitable to try not to assume the worst about someone's intentions even if what they did was wrong, things like what certain people have commented here seem to come dangerously close to outright condoning Lefebvre's actions. Remember, there are 9 ways of being an accessory to another's sin:

I. By counsel
II. By command
III. By consent
IV. By provocation
V. By praise or flattery
VI. By concealment
VII. By partaking
VIII. By silence
IX. By defense of the ill done.

Approving of Lefebvre's actions seems to fall into V and/or IX.

Militia: "while it's charitable to try not to assume the worst about someone's intentions"

Indeed, good for all here to remember.