MORE INSIGHTS INTO THE MIND OF THE BISHOP OF ROME, POPE FRANCIS, FROM HIS HOMILY AT THE CHAPEL OF HIS PLACE OF RESIDENCE AT THE VATICAN MOTEL 6 (I WONDER IF THEY HAVE HBO?) 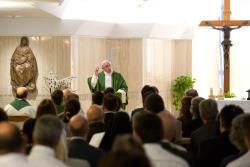 POPE CONTINUES TO CALL OUT THE HERETICS OF PELAGIANISM AND GNOSTICISM--NOT EVEN POPE BENEDICT LABELED CATHOLICS HERETICS--IS THIS A GOOD SIGN?

In the last 100 days or so, we've been getting to know what Pope Francis believes and how he teaches in his new papal magisterium. He has not shunned using this word and calling the faithful to fidelity to the Magisterium, the pope and our individual bishops in union with him.

Unlike Cardinal Ratzinger who was a prolific writer and often entered into theological debates, even printing a debate with another cardinal in America Magazine, we know and knew little or nothing of Cardinal Bergoglio. He has written very little of theological import.

So his homilies and audiences give us a glimpse into this theology. We know he is a progressive when it comes to the Magisterium's social teachings, especially previous popes as our social teachings are quite progressive and yes, we as Catholics are called to fidelity to these teachings too. We are not cafeteria Catholics picking and choosing as though we are a part of a political party of some kind.

We know he likes simplicity and wants to identify with the lowly, even the lay person. He said yesterday at his papal audience that all Christians are equal, that he as "Mr. Pope" is not above any other Christian. Ontologically this is correct but not in terms of the diverse roles in the Church. I would think this could be a case of "false egalitarianism" but the Holy Father would need to make his stance on equality a bit less ambiguous. He is definitely a populist which Pope Benedict and Pope Paul VI and Pope Pius XII were not, Pope John XXIII and Pope John Paul I and II were but not to the same degree as this pope.

So at today's Motel 6 Chapel at the his place of residence on Vatican property, this is what the Holy Father said as reported by Vatican Radio:

Pope at Mass: Resting our faith on the rock of Christ

(Vatican Radio) There are people who "masquerade as Christians," and sin by being excessively superficial or overly rigid, forgetting that a true Christian is a person of joy who rests their faith on the rock of Christ. Some think they can be Christian without Christ; others think being Christian means being in a perpetual state mourning. This was the focus of Pope Francis’ homily at morning Mass on Thursday.

Rigid and sad. Or happy but with no idea of ​​Christian joy. These are two - in a sense opposite - "houses", in which two categories of believers live and which are both seriously flawed: they are grounded in a Christianity made of words and fail to rely on the "rock" of the Word of Christ. Pope Francis identified both groups in his comments on the Gospel of the day, the famous passage from Matthew of the houses built on sand and rock.

"In the history of the Church there have been two classes of Christians: Christians of words - those" Lord, Lord, Lord "- and Christians of action, in truth. There has always been the temptation to live our Christianity not on the rock that is Christ. The only one who gives us the freedom to say 'Father' to God is Christ, our rock. He is the only one who sustains us in difficult times, no? As Jesus said: the rain falls, rivers overflow, winds blow, but the rock is safe, words, the words take flight, they are not needed. But this is the temptation of these Christians of words, of a Christianity without Jesus, a Christianity without Christ. And this has happened and is happening today in the Church: being Christians without Christ. "

Pope Francis went on to analyze these "Christians of words," revealing their specific characteristics. There is a first type – which he defined as "gnostic -"who instead of loving the rock, loves beautiful words "and therefore lives floating on the surface of the Christian life. And then there's the other, who Pope Francis called "pelagian", who leads a staid and starched lifestyle. Christians, the Pope ironically added, who “stare at their feet” :

"And this temptation exists today. Superficial Christians who believe, yes, God, yes Christ, but not ‘everywhere’: Jesus Christ is not the one who gives them their foundation. They are the modern gnostics. The temptation of gnosticism. A 'liquid' Christianity. On the other hand, there are those who believe that the Christian life should be taken so seriously that they end up confusing solidity, firmness, with rigidity. They are rigid! This think that being Christian means being in perpetual mourning. "

Pope Francis continued that the fact is that there “are so many” of these Christians. But, he argued, "they are not Christians, they disguise themselves as Christians." "They do not know – he added - what the Lord is, they do not know what the rock is, do not have the freedom of Christians. To put it simply ‘they have no joy ":

"The former have a ‘superficial’ happiness. The others live in perpetual state of mourning, but do not know what Christian joy is. They do not know how to enjoy the life that Jesus gives us, for they know not to talk to Jesus. They do not feel that they rest on Jesus, with that firmness which the presence of Jesus gives. And they not only have no joy, they have no freedom either. They are the slaves of superficiality, of this life widespread, and the slaves of rigidity, they are not free. The Holy Spirit has no place in their lives,. It is the Spirit who gives us the freedom! Today, the Lord calls us to build our Christian life on Him, the rock, the One who gives us freedom, the One who sends us the Spirit, that keeps us going with joy, on His journey, following His proposals. "

MY FINAL COMMENT: Would our American politicians and jurists, such as Nancy Pelosi, Joe Biden and Anthony Kennedy be the gnostics and other Catholics in the multitudes who are like them that Pope Francis mocks and condemns?
Posted by Fr. Allan J. McDonald at Thursday, June 27, 2013

Here is my frustration: It appears that the pseudo-Christians would be corrected or called out. One thinks that trying to follow the Church's doctrines, Law, and teachings would be a sort of action. Yet the ones who act most contrarily toward doctrine, law and teachings are not chastised, or only after years of attacks against the Church. But there is only one document in the last 50 years, a single letter, for the traditionalists to point to as confirmation of our actions. And that covers only our adherence to a traditional form of Liturgy. In the action we have politicians teach in the name of the Church about abortion being a right, the limits of Christianity as private and irrelevant to public life. the silence is not just deafening, it is affirmation of their teaching.

I dare say that traditionalist will accept correction, will not approach for communion if he is advised that he is in a state of sin that must first be corrected. the solution is simple: confession of the sin. I would hope my priest would advise me and instruct me to go to confirmation first before committing the greater sin of taking communion in the state of mortal sin. He has done that and I love him more for it. It is not condemnation. It is a great act of love.

Our Church leaders with very, very few exceptions, have the strength to simply deny communion out of love and concern for the sinner.

I'm sorry, these animadversions of Pope Francis are to me so much gobbledegook.I can't even start to analyze them because on closer inspection they become even more meaningless. Who specifically are the 'gnostics' and 'pelagians' in the present-day Church? He doesn't say. Benedict was highly intellectual, but had the gift of explaining complex issues in a way that was understandable to the layman (this sort of clarity from a German as well!) JP II could be a bit obscure at times, but by and large one knew what he was on about.

What for example is "liquid Christianity" and what has this do do with gnosticism? It's all very vague, confused even. He makes a lot of unfounded assumptions about "classes of Christians", and ought to realize that there are two classes of public speakers - those who develop cogent arguments and those who 'waffle'. On the available evidence Pope Francis risks being in the latter category.

Perhaps he is so profound a thinker that I am simply incapable of grasping what he means - but somehow I doubt it.

I'm afraid this is gobbledegook to me as well. He appears to be rambling about opinions based on preconceived notions about groups he has glanced at from afar.

Unfortunately, this kind of gobbledegook diminishes the voice of the papacy, when the Church and the world so needs a papal vox clara. For sure, these muddy insights into the mind of the Bishop of Rome we do not need.

Of course the problem lies with both the Holy Father and Vatican Radio for printing this. We may be hearing too much from the Holy Father. I don't think this was the case with Pope Benedict and certainly he didn't have his daily homilies printed and perhaps these Masses were private. I know that Pope John Paul II had different groups at his daily Mass in the papal apartments but I'm not sure he gave a homily and if he did these were not communicated to the world.
I think Pope Francis is still on a learning curve and dealing with a mess at the Vatican which Pope Benedict seem not to deal with personally. Michael Voris and others seem to be reporting on the gay lobby that Pope Francis alluded to and that this is going to be an ugly scandal and discredit the moral authority of the Church even further. I think we are going to be in "reform" mode for quite some time and there has to be soul searching in terms of what has happened in the so-called renewal to the Vatican, our bishops, our priests and laity and finally the laity these past 50 years and own up to the disaster it has been for people as we tried to update liturgies and structure and all the other things and let the Church go to hell in a handbag in the meantime. Nero fiddling as Rome burned!

if you are confused see the following article which explains "gnostic" and "pelagian" a little better: http://www.pittsburghcatholic.org/columnists_storys.php?id=1832