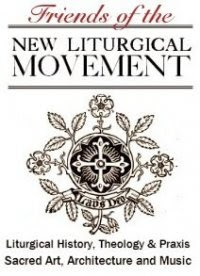 "WE ARE BEYOND THE OLD RITE, NEW RITE ARGUMENTS NOW--NEED TO CELEBRATE WHATEVER FORM AS THE CHURCH GIVES IT TO US"

You can listen to a EXCELLENT talk BY PRESSING HERE! and interview with Dom Alcuin Reid with Christopher Wells here and see how this is not a reactionary group in Rome promoting a dead era, but an alive group promoting proper liturgical renewal. He gives a wonderful model for the Liturgy in the New Evangelization and moving forward with liturgical renewal in the 21st century.

(From Vatican Radio) Hundreds of participants from more than 35 countries are in Rome this week to take part in an international conference to study, promote, and renew the appreciation of liturgical formation and celebration, and its foundation for the mission of the Church.

The Sacra Liturgia Conference begins Tuesday evening with Solemn Pontifical Vespers celebrated by Bishop Dominique Rey (pictured) of Fréjus-Toulon in France. It is one of a number of initiatives within the Year of Faith, which commemorates 50 years since the start of the Second Vatican Council.

“The Conference is really about looking at the Liturgy as the foundation for the life and mission of the Church,” said Dom Alcuin Reid of the Diocese of Fréjus-Toulons, who is organising the event.

The Sacra Liturgia Conference has special reference to the teaching and example of Benedict XVI, who made the liturgy an important focus of his pontificate. Dom Alcuin said the Conference hopes “to pay tribute to Pope Benedict XVI and all that he did both as Cardinal and as Pope, in raising the liturgical question in the life of the Church and promoting liturgical renewal in promoting what some are coming to call the new liturgical movement.” The Conference, he said, “is a step further along the path of that new liturgical movement. It’s a movement, really, which looks forward, and forward in a broad sense, so that there is best practice across the board, so that there is the liturgy celebrated with that ars celebrandi, with fullness, with beauty, with dignity.”

The liturgy, Dom Alcuin said, quoting the Second Vatican Council, is “the ‘source and summit,’ it’s where our life comes from, and it’s also where it’s going to, the heavenly liturgy – but also the liturgy here on earth, where we come, yes, rejoicing, ‘carrying our sheaves,’ as the psalm says. But also bringing our sorrows, bringing our tears, which, through Christ’s action in the liturgy can be turned into joy.”