THE CHURCH IS NOT A NON GOVERNMENTAL ORGANIZATION (NG0)--POPE FRANCIS 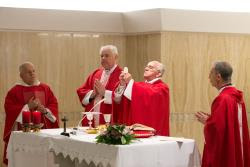 But first, what is the definition of Pelagianism? From Wikipedia:

Pelagius was opposed by Augustine, and rejected the Augustinian concept of grace.[1] When Pelagius taught that moral perfection was attainable in this life without the assistance of divine grace through human free will, Augustine contradicted this by saying that perfection was impossible without grace because we are born sinners with a sinful heart and will. The Pelagians charged Augustine on the grounds that the doctrine of original sin amounted to Manichaeism: the Manichaeans taught that the flesh was in itself sinful (and they denied that Jesus came in the flesh) – and this charge would have carried added weight since contemporaries knew that Augustine himself had been a Manichaean layman before his conversion to Christianity. Augustine also taught that a person's salvation comes solely through an irresistible free gift, the efficacious grace of God, but that this was a gift that one had a free choice to accept or refuse.[2]

Pelagianism was attacked in the Council of Diospolis (also known as Lydda; modern Lod)[3] and condemned in 418 at the Council of Carthage.[4] These condemnations were ratified at the Council of Ephesus in 431. The strict moral teachings of the Pelagians were influential in southern Italy and Sicily, where they were openly preached until the death of Julian of Eclanum in 455, and in Britain until the coming of Saint Germanus of Auxerre c 429.[5]

What is the definition of Pantheism?

Pantheism is derived from the Greek roots pan (meaning "all") and theos (meaning "God"). There are a variety of definitions of pantheism. Some consider it a theological and philosophical position concerning God.[3]:p.8

Pope at Mass: Poverty and praise of God

(Vatican Radio) The Gospel should be generously and simply proclaimed said Pope Francis during morning Mass Tuesday in the Casa Santa Marta chapel. Poverty and praise of God, he said are the two key signs of an evangelical and missionary Church. Instead a rich Church becomes an old, lifeless Church, it becomes an NGO that neglects the true treasure of God's free grace. Emer McCarthy reports:

Pope Francis began his homily quoting Jesus exhortation to the Apostles, sent to proclaim the Kingdom of God: "Provide yourselves with no gold or silver, not even with coppers for your purses" (M 10:9). He said the Lord wants us to proclaim the Gospel with simplicity, a simplicity "that gives way to the power of the Word of God," because if the Apostles had not had "confidence in the Word of God," "they would probably have done something else”. Pope Francis went on to identify the "key word" in the mandate given by Jesus: "Freely you have received, freely give." He said everything is grace and when we leave grace “a little to one side” in our proclamation, the Gospel “is not effective".

"Evangelical preaching flows from gratuitousness, from the wonder of the salvation that comes and that which I have freely received I must freely give. This is what they were like at the beginning. St. Peter did not have a bank account, and when he had to pay taxes, the Lord sent him to the sea to catch fish and find the money in the fish, to pay. Philip, when he met Queen Candace’s finance minister, did not think, 'Ah, good, let’s set up an organization to support the Gospel ...' No! He did not strike a ‘deal’ with him: he preached, baptized and left".

Pope Francis said the Kingdom of God, "is a free gift”, but he also added that from the beginning of the Christian community, this attitude has been subjected to temptation. "There is the temptation to seek strength", he said, “ elsewhere than in gratuity”. This temptation creates "a little 'confusion," he warned, where “proclamation becomes proselytizing”. Instead "our strength is the gratuitousness of the Gospel." The Lord, "has invited us to preach, not to proselytize." Citing Benedict XVI, Pope Francis stated that "the Church does not grow through proselytizing but by drawing people to her". And this attraction, he said, comes from the testimony of "those who freely proclaim the gratuity of salvation".

"Everything is grace. Everything. And what are the signs of when an apostle lives this gratuity? There are so many, but I will underline only two: First, poverty. The proclamation of the Gospel must follow the path of poverty. The testimony of this poverty: I have no wealth, my wealth is the gift I received, God: this gratuity is our wealth! And this poverty saves us from becoming managers, entrepreneurs ... The works of the Church must be brought forward, and some are a little complex, but with a heart of poverty, not with the heart of an investment broker or an entrepreneur…"

Pope Francis continued, "The Church is not an NGO: it is something else, something more important, and this is the result of gratuity. Received and proclaimed". Poverty "is one of the signs of this gratuity." The other sign "is the ability of praise: when an apostle does not live this gratuity, he or she loses the ability to praise the Lord." Praising the Lord, in fact, "is essentially gratuitous, it is a gratuitous prayer: we do not ask, we only praise"

"These two are the signs of an apostle who lives this gratuity: poverty and the ability to praise the Lord. And when we find the apostles who want to build a rich Church and a Church without the gratuitousness of praise, the Church becomes old, the Church becomes an NGO, the Church becomes lifeless. Today we ask the Lord for the grace to acknowledge this generosity: 'Freely you have received, freely give'. Recognizing this gratuity, this gift of God . Let us move forward in preaching of Gospel".

Tuesday morning Mass was concelebrated by Archbishop Gerhard Ludwig Müller Prefect of the Congregation for the Doctrine of the Faith and was attended by Congregation Staff.

Text from page http://en.radiovaticana.va/Articolo.asp?c=700426
of the Vatican Radio website

Much better than that spittle about Big Bad Traddies Who Count Rosaries.