NOW WE KNOW WHY THE POPE HAS REMAINED IN THE VATICAN'S MOTEL 6, FOR COMMUNITY, NOT FOR ETHICS

The papal apartments are not as lavish as the press would make you think, making all other popes who have moved into them look bad compared to the good Pope Francis. As you can see by the floor plan, the actual papal apartment isn't that lavish at all, but I suspect it is isolating. 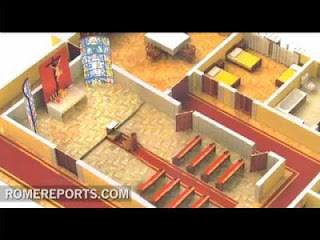 Since Pope Francis likes simplicity, it was thought that he stayed in the Vatican Motel 6 because of that concern. Actually, the Holy Father says it is for psychiatric reasons, living alone is not good for him.

This is what he said to a young person today who had the temerity to ask him why he doesn't live in the papal apartments:

"It is not just a matter of wealth, it is a matter of personality: I have the need to live among people. If I lived by myself, perhaps somewhat isolated, this would not be good to me. A professor asked me that: why don't you go live there, and I answered him: listen, professor, for psychiatric reasons! But it's my personality. The apartment - the Pope specified - is not so much luxurious, [it is] quiet, but I cannot live by myself.

"And then - he continued - I believe that the times speak to us of so much poverty in the world, this [poverty] is a scandal! In a world in which we have so much wealth, and so many resources to feed all, it cannot be understood how many hungry children there are, so many children without education, so many poor people. Poverty today is a cry, we all must consider if we can become a bit poorer. How can I become a bit poor in order to look like Jesus, Poor Master?"


My only question to the Holy Father and I mean this in all respect and sincerity, "isn't is a waste not to use the residence that is already paid for and doesn't inconvenience the Vatican Motel 6 staff? The same with all the vestments popes wear--they are paid for and what a waste of beauty and art in not using them and allowing one's personality to trump the papal mystery. You are Peter!
Posted by Fr. Allan J. McDonald at Friday, June 07, 2013

Is the Vatican hotel really a "Motel 6", or are you just calling it that to be sarcastic?

At the Vatican City State, they may call it something else. I use it to be humorous but some could mistake humor for sarcasm.

The Domus Sanctæ Marthæ (Latin for Saint Martha's House) is a building completed in 1996 adjacent to Saint Peter's Basilica in Vatican City. Built during the reign of Pope John Paul II, it functions as a guest house for clergy having business with the Holy See, as the hotel residence of the members of the College of Cardinals when they are participating in a papal conclave to elect a new pope, and as the current home of Pope Francis.

"You are Peter" and the "papal mystery"...Did Peter wear anything like any of the vestments that are in the Vatican ? It may be that some of those vestments are ALIENATING to God's people, and Francis is present enough to the Holy Spirit to discern that, particularly given what the Church is currently dealing with due to the abominations against children its priests have committed, covered up by career minded bishops and their sycophants. The deepest and most Christ-like Papal mystery is that he is "Servant of Servants of God"...Francis is not going to turn us Protestant because he makes the Papal Throne more approachable and refuses to wear ermine and silks.

There are times when it is appropriate for the pope to wear more regal outerwear. Pope Benedict wore the simple cassock frequently to public events . But I remember when nuns and priest shed formal habits for casual lay clothes thinking this would open the flood gates for vocations but it caused the reverse. Familiarity breeds contempt.

Anon - Separating the essential from the non-essential is never easy. By making a change one also makes enemies.It takes someone with great holiness and great courage, traits I think we are blessed to have in Pope Francis.

Pope Francis still uses the Apostolic Apartments for official meetings, the Angelus etc, in reality he has two homes, unlike his predecessors he has chosen not to "live over the shop", in immediate contact with his secretarial and other staff.

The problem is the Papacy is a "temporary" job, is Pope Francis imposing something on his successors that will create difficulties?

Incidently, the plan is not that accurate there are a few more bathrooms, not every one shares the Pope's private bathroom, and no one shares a bedroom, the chapel has reasonably sized sacristy too and there are a few "utility rooms". The Pope's bedroom, does or used to have, a room off it for a doctor or valet.

Why can we not refrain from mentioning the clerical abuse scandal when discussing church matters? There has been more abuse in public schools but there doesn't seem to be the same need to compulsively mention abusive teachers when discussing school matters.