Cardinal Ranjith on the sense of mystery in the liturgy: We need to improve the Ordinary Form, we need to strengthen it further and basing the reform of the reform on the Extraordinary Form:


Fr. Z has a poem from a Church bulletin around 1965 and yes this captures the sentiment completely of that period as this could have been in any bulletin, USA in 1965. I remember the sentiment very well and I suspect Cardinal Ranjith does too:

Someone sent me a PDF of a parish bulletin for St. Patrick’s Church in Madison, WI dated 7 Feb 1965. On the front page there is this poem.

Latin’s gone, peace is too;
singin’ and shoutin’ from every pew.
Altar’s turned around, priest is too;
Commentators yellin’: “Page 22.”
Communion rail’s gone, stand up straight!
Kneelin’ suddenly went out of date.
Processions are form in’ In every aisle
Salvation’ organized Single file.
Rosary’s out, psalms are in;
hardly ever hear a word against sin.
Listen to the lector, hear how he reads;
Please stop rattlin’ them rosary beads.
Padre’s looking puzzled, Doesn’t know his part;
Used to know the whole deal, In Latin by heart.
I hope all changes are just about done;
That they don’t drop Bingo, before I”ve won.

Fr. Z reporting from the wonderful liturgical conference in Rome where Cardinal Ranjith spoke, wrote of Fr. Michael Lang who examined what happens to church architecture when the wrong starting points are adopted. He assigned more blame to ecclesiastics rather than to architects. If the theological starting points are wrong-headed, the building will not serve its proper purpose. Lang posited that many modern (really ugly, failure) churches take as their starting points the notion of Rahner, and then Schillebeecxk, that sacraments recognize preexisting realities rather than confer grace. Contrast that with Sacrosanctum Concilium 7.

To be bluntly honest with you I was schooled in the Rahner, and then Schillebeecxk, theology of sacraments and had never but two and two together as Fr. Lang did in his talk. This is Rahner's thesis, which I ate hook, line and sinker, as though some infallible treatise: 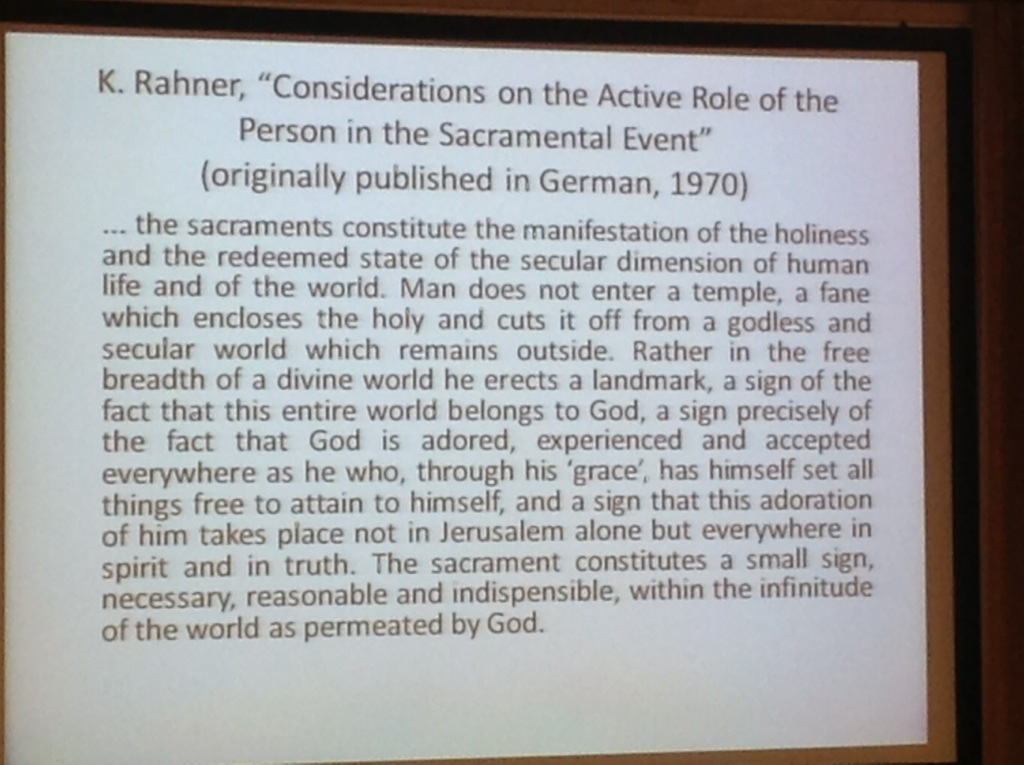 May Pope Francis be our "wartime pope", doing all the dirty work cleaning up the scandals in the Vatican. And may the next pontificate be a "peacetime pope", may it be Cardinal Ranjith, who will restore the Mass to full glory.

Amen to that. It is becoming quite obvious we need the skills of Pope Francis, vowed to poverty at a Jesuit and with Jesuit spirituality and missionary zeal, and Jesuit sobriety to get the Vatican corruption under control, to name new people truly committed to the Catholic faith with a tremendous understanding of fidelity to the Magisterium
Fidelity, fidelity and fidelity to the Magisterium has been the most consistent message of Pope Francis. And yes, Cardinal Ranjith would be a great pope; I just hope his Italian is impeccable as this is quite necessary for the Bishop of Rome.

RE: Rahner. What garbage. Rahner and Silly bleats, and Kung were all hugely popular at Vanderbilt and Chicago theology schools when I was there in the 70's. Prots loved them because they were the "revolution" that was going to finally break down the barriers of Catholicism and allow real communication among the denominations ( pause for projectile vomit ). That statement by Rahner is just the kind of content-less double talk that progressive theologians and neo-prots excelled at. I am reminded of the following parody provided by one of my believing professors: