BOMBSHELL FOR POST CATHOLICS AND RENEGADE CATHOLICS--CATHOLIC UNITY MUST PRECEDE ECUMENICAL UNITY AND THAT UNITY IS BEING UNITED TO THE POPE--POPE FRANCIS AT HIS WEDNESDAY GENERAL AUDIENCE!

NO SUCH THING AS CATHOLIC UNITY WITHOUT BE UNITED TO THE POPE--SO SAYS POPE FRANCIS AND HE USES THE WORD "POPE" TO MAKE HIS POINT, NOT "BISHOP OF ROME"! 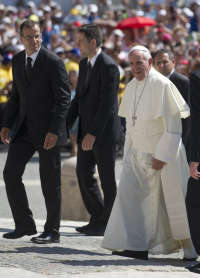 Well, if anyone thought that this Pope, the Bishop of Rome, Holy Father Francis, was going to water down Catholic Ecclesiology and make it okay for post Catholics and renegade Catholics to have free reign, well think again! It ain't going to happen in the Roman Catholic Church!

Here are some sound bites: GENERAL AUDIENCE: HOW CAN WE HAVE UNITY AMONG CHRISTIANS IF AS CATHOLICS WE AREN'T UNITED?

“In the Church, therefore,” the pontiff continued, “there is a variety, a diversity of tasks and functions. There is no dull uniformity but the richness of the gifts that the Holy Spirit distributes. There is communion and unity: all are in relation to one another and all combine to form a single vital body, profoundly connected to Christ. Let us remember this well: being part of the Church means being united to Christ and receiving from him the divine life that makes us to live as Christians. It means remaining united to the Pope and bishops who are instruments of unity and communion and it also means learning to overcome selfishness and divisions, to understand one another better, and to harmonize the variety and richness of each one. In a word, loving God and the persons around us, in our families, parishes, and associations, better. Body and limbs must be united in order to live!”

Speaking extemporaneously, the Holy Father added: “Unity is always greater than conflict. Conflicts, if they aren't resolved well, separate us from one another, separate us from God. Conflict can help us grow but it can also divide us. Let's not take the path of division and struggle between one another. All united, all united with our differences but always united: this is Jesus' path.”

“How much damage is caused to the Church by divisions among Christians, by being apart, by narrow interests! The divisions among us,” he continued, “but also the divisions between the communities: evangelical Christians, Orthodox Christians, Catholic Christians, why are we divided? We must try to bring unity. … We must pray together as Catholics and also with other Christians, must pray that the Lord grant us unity, unity between us. But how will we have unity among Christians if we aren't capable of having it among us Catholics? Of having it in our family? How many families fight and are divided! Seek unity, the unity that makes the Church. Unity comes from Jesus Christ. He sends us the Holy Spirit to create unity.”

READ MORE OF THIS BOMBSHELL AT THE VATICAN RADIO WEBSITE HERE!

As an erstwhile officer in the Royal Artillery I can inform you that a bomb is a bomb and a shell is a shell - there is no such animal as a bombshell.

It looks like the Holy Father not only has kept his black shoes but also his black trousers under his white Papal cassock.

Yes, his black trousers are seen especially when he sits and it appears he uses a cassock that isn't lined, a summer cassock but in white unlined isn't a good idea.