PRACTICAL CATHOLICISM BY WAY OF HIS HOLINESS POPE FRANCIS 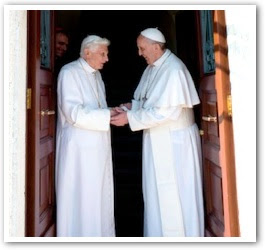 Who knows what the future will bring in terms of the ongoing efforts of the "reform of the reform in continuity" of the Liturgy. This morning the Holy Father's Mass Wednesday morning in the chapel of the Domus Sanctae Marthae residence at the Vatican Motel 6, with the presence of some members of the Congregation for Divine Worship and of the Vatican Apostolic Library. Among others, Cardinal Antonio Cañizares Llovera, Archbishop. Cesare Pasini and Msgr. Joseph Di Noia concelebrated.

Thus far, we hear nothing about reform in continuity but we do hear fidelity to Holy Mother Church and her Magisterium. We don't hear anything from Pope Francis concerning the Liturgy and its ongoing reform but we hear about the devil and his influence.

The Holy Father can't chant, distributes Holy Communion very rarely to the laity and the times he has done so it has been with them standing and by way of intinction. The deacons of the Mass, though, kneel to receive the Intincted Host from the Holy Father.

There hasn't been any noticeable change in the music of the Mass from the Vatican liturgies. But of course the vestments the Holy Father chooses to wear are not ornate or Roman or frilly. He is into "noble simplicity."

To date the Holy Father has kept the Benedictine altar arrangement but will not celebrate Mass ad orientem as far as I can tell.

But there is still the Congregation for Divine Worship in the Vatican headed currently by Cardinal Antonio Cañizares Llovera. There had been rumors that the Ordinary Form Mass and the Extraordinary Form Mass would give way for a new Roman Missal that would be a wonderful mix of the old and new leaning more toward the EF in terms of ritual precision and perhaps the Order of the Mass. But who knows.

Pope Francis "reform of the reform" has to do with people, then maybe he'll move onto the Liturgy. I can live with that!

"There hasn't been any noticeable change in the music of the Mass from the Vatican liturgies. But of course the vestments the Holy Father chooses to wear are not ornate or Roman or frilly. He is into "noble simplicity.""

I'll keep fighting this fight until someone either kills me or bans me. That is not noble simplicity. No way, no how! Noble simplicity means celebrating Holy Mass within the bounds of what the priest has at his disposal in a way which is in keeping with the nobility of giving Glory to God.

The purpose of the Mass is to give the GREATEST glory to God that one can give, based on his circumstances and by as closely following the rubrics as is possible. Pope Francis doesn't do that. By forgoing the chapels, vessels, vestments and attendants that he has at his disposal, he is minimalizing the Mass. That is not nobly simplistic. That is pauperism. Now, if he were in a dirt hut in rural Argentina, as a missionary priest (assuming that is the case) then yes, his Mass would be nobly simplistic. But that is not his circumstance.

The Mass is a glimpse into the Heavenly liturgy. That has been taught for centuries. It should not be minimalized simply because it doesn't fit the piety of a particular priest. That fault has also been going on for centuries; moreso since the Council (but I digress).

My point is that noble simplicity isn't based on simple minded attributes, but it is based upon understanding that one celebrates the Mass in a reverent way without being ostentatious beyond his means. The Holy Father's means are greater than most, but that is by design. He is the vicar of Christ (even if the current Holy Father doesn't like that term), it should be greater.

I think that a REAL discussion on "noble simplicity" must be had and that the Holy Father's understanding of his own role must continue to grow, not just talking about Satan, but also in promoting the great glories the Church has to offer. It takes it all, not just parts to complete a ministry.

I see your points. I think people like you need to plead directly to the Holy Father and remind him of your well-crafted points. (and also that deliberate iconoclasm-for whatever reason- in many ways hurts 'the poor' more than it hurts 'the rich'. e.g. not everyone has beautiful houses to go home to.

"The mass is a glimpse of the heavenly liturgy." Where are we told what style vestments, music, language, or other liturgical accoutrements are employed in this heavenly liturgy?

Aside from white robes, singing, and incense (!), I don't know of any other "glimpses" we have been given.

(We do know what kind of automobiles the angels drive... As the song says, "Fill the heavens with sweet Accords...")

I come from humble origins and both my mother and father were poor growing up. Yet, beautiful ornate churches and well-done "frilly" Masses didn't so much point to the wealth of the clergy who themselves in Catholic circles come not from wealth but more modest means. St. Joseph parish here has a wonderfully ornate building but the majority of our parishioners are far from wealth and that's the way it has been since day one.

Exactly my point. I think that Pope Francis could/should learn something from St. Joe's or any number of the blue collar neighborhoods that have 1500 seat parish churches of the late 19th and early 20th centuries...

In Latin America, as with most of the world, there are still classes and outward appearances are important. That is a big issue and would distract from his pastoral goals.

But he transcends any one locale, regardless of his heritage. He is no longer part of Latin America, by his own admission. He is now, "Bishop of Rome."

I knew that over-simplification would come back to bite him in the proverbial a$$.

Yeah, Ignotus, and the Bible tells us how far skin can stretch because Balaam tied his ass to a tree and walked across the desert...

Ignotus, You are not aware of any glimpses into the Heavenly Liturgy because you are blind to them...willfully blind.

Actually, doesn't St. John's Apocalypse give us precisely that glimpse into the Heavenly Liturgy Fr. Kavanaugh claims we lack?

What was that excellent Catholic seminary you went to, again?

Andy, that is true, but I am not sure people really see it that way. I bet people from Latin American see him as Latin American first and all of his actions as his influence on the Holy See, not the other way 'round. If they perceive him as seeking a higher class, they will reject him.

Marc - I didn't say that we don't glimpse the heavenly liturgy. We know that those around the throne are dressed in white garments, that they sing Holy Holy Holy, and that they use incense.

I asked what other aspects of the heavenly liturgy have been revealed to us.

Indeed, Marc, and Ignotus might want to pay particular attention to Chapter Four of Revelation...unless he thinks Revelation is a new Chevy model. LOL!

I was thinking of the golden candlesticks and all that... Plus, we have the Old Testament Temple as a type of our worship with its vestments and precision.

So, we know our worship isn't meant to be plain or simplistic.

Then, of course, one needs to define what simplistic is, and that is likely to change with place and time. And we now know that it shouldn't change "on a whim" to bring our prior conversation forward.

Marc - But we aren't told that the OT Temple worship is the model for heavenly worship.

re: "Fill the heavens with sweet Accords" which will be the cars angels will be driving:

Ignotus,
You've unwittingly triggered another of my automotive-related tangents . . !

No, I'd like to believe that if the angels will be driving cars in Heaven they will be the humble and once ubiquitous Model T Ford (1908-1927).

Model T's are the epitome of "noble simplicity" in an automobile (most didn't even come factory-equipped with a speedometer and none had fuel gauges). Most were black (like clerical dress) and they were marketed as "The Universal Car" (good for all, like the universal Church). Their shifting system was Trinitarian, with three little pedals on the floor for high-low, reverse, and brake. Most had wooden spoked wheels much like Biblical chariot wheels but with pneumatic tires.

To top it all, Henry Ford himself once said that he built them so that a man of moderate means could "enjoy with his family the blessings of happy hours spent in God's open spaces."

May fellow Model T enthusiast (and your brother priest) Monsignor Larry Lucree rest in peace (maybe with a Model T to drive in Heaven!).

Fr. Kavanaugh - You know, I was actually thinking about that idea as I typed that. That's why I settled on the phrasing I used. I think that your point is an interesting one. I'm going to follow up on this and consider it further.

There is supposed to be a booklet by the CDWS coming out this summer: http://www.zenit.org/en/articles/vatican-preparing-a-manual-to-help-priests-celebrate-mass

It may be the first step in the "reform of the reform".

I hope that it contains an explicit encouragement of celebrating Mass ad orientem.

"Andy, that is true, but I am not sure people really see it that way. I bet people from Latin American see him as Latin American first and all of his actions as his influence on the Holy See, not the other way 'round. If they perceive him as seeking a higher class, they will reject him."

And that is where catechesis comes into play. Rather than continuing to promote this flawed liberation theology (because that's what we're REALLY talking about here), an authentic Catholic understanding of the papacy should be fostered in the whole world, not just Latin America.

That has to start with the Holy Father embracing those things which are particular to his office, NOT him, personally. He isn't Bergoglio any more, he is Francis.

What belongs to the office is well known. Ermine, silk, gems, ostrich feather fans are not part of the Petrine Office, but attempts to make the papacy look like a temporal power on the same level as other European monarchies.

And it is so much more than that...

What belongs to the office is well known. Ermine, silk, gems, ostrich feather fans are not part of the Petrine Office, but attempts to make the papacy look like a temporal power on the same level as other European monarchies.

And it is so much more than that...