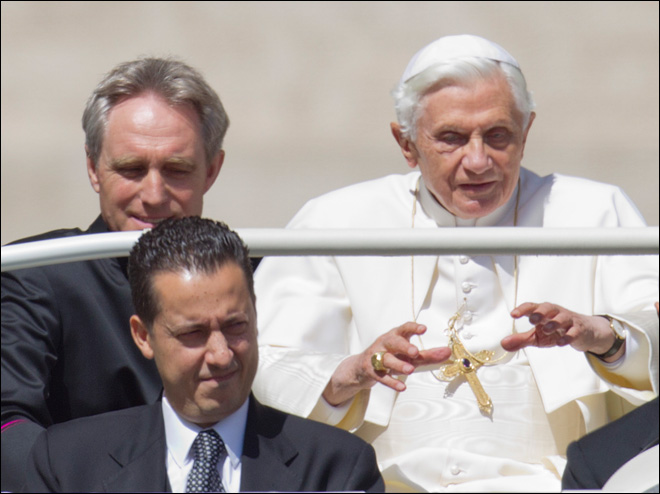 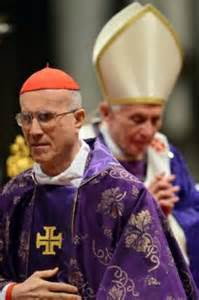 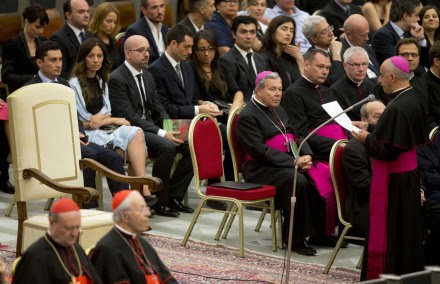 This morning Vatican Radio communicated a terse statement concerning the arrest of Monsignor Nuncio Scarano. The Vatican often uses the term "monsignor" to designate a bishop. Bishop Nuncio Scarano is the Bishop of Salerno. Perhaps this now explains the Holy Father's urgent work which caused him to miss a concert and the famous empty chair?

This is the Vatican statement:

As already known from the past few days, Monsignor Nuncio Scarano has been suspended from duty at APSA (Administration of the Patrimony of the Apostolic See) for over a month, as soon as his superiors were informed that he was under investigation.

This is in accordance with the Regulations of the Roman Curia, which requires the precautionary suspension for persons against whom criminal proceedings have begun.

The Holy See has not yet received any request from the competent Italian authorities on the matter, but confirmed its willingness to cooperate fully.

The competent Vatican authorities, the AIF, is following the problem to take, if necessary, measures appropriate to its competence.

VATICAN CITY (AP) — A Vatican official was arrested Friday by Italian police for allegedly trying to bring 20 million euros ($26 million) in cash into the country from Switzerland aboard an Italian government plane, his lawyer said.

Monsignor Nunzio Scarano, already under investigation in a purported money-laundering plot involving the Vatican bank, is accused of fraud, corruption and slander stemming from the plot, which never got off the ground, attorney Silverio Sica told The Associated Press.

It was the latest financial scandal to hit the Vatican and came just two days after Pope Francis created a commission of inquiry into the Vatican bank to get to the bottom of the problems that have plagued it for decades and contributed to damaging the Vatican’s reputation.

Sica said Scarano was a middleman in the Swiss operation. Friends had asked him to intervene with a broker, Giovanni Carenzio, to return 20 million euros they had given him to invest. Sica said Scarano persuaded Carenzio to return the money, and an Italian secret service agent, Giovanni Maria Zito, went to Switzerland to bring the cash back aboard an Italian government aircraft. Such a move would presumably prevent any reporting of the money coming into Italy.

The operation failed because Carenzio reneged on the deal, Sica said.

Zito, nevertheless, demanded his 400,000 euro commission. Scarano paid him an initial 200,000 euros by check, Sica said. But in a bid to not have the second installment of the commission deposited, Scarano filed a report for a missing 200,000 check, even though he knew Zito had it, Sica said.

Carenzio and Zito also were arrested Wednesday along with Scarano, Sica said.

When asked how Scarano responded to the accusations, Sica said ‘‘I think that Don Nunzio will respond to the questions.’’

It’s not the only troubles facing Scarano.

Prosecutors in the southern city of Salerno have placed him under investigation for alleged money-laundering stemming from his account at the Vatican’s bank, called the Institute for Religious Works, or IOR.

The investigation concerns transactions Scarano, then an official at the Administration for the Patrimony of the Apostolic See, made in 2009 in which he took 560,000 euros ($729,000) in cash out of his personal IOR bank account and carried it out of the Vatican and into Italy to help pay off a mortgage on his Salerno home.

To deposit the money into an Italian bank account — and to prevent family members from finding out he had such a large chunk of cash — he asked 56 close friends to accept 10,000 euros apiece in cash in exchange for a check or money transfer in the same amount, Sica said earlier this week. Scarano was then able to deposit the amounts in his Italian account.

The original money came into Scarano’s IOR account from donors who gave it to the prelate thinking they were funding a home for the terminally ill in Salerno, Sica said. He said the donors had ‘‘enormous’’ wealth and could offer such donations for his charitable efforts.

He said Scarano had given the names of the donors to prosecutors and insisted the origin of the money was clean, that the transactions didn’t constitute money-laundering, and that he only took the money ‘‘temporarily’’ for his personal use.

The home for terminally ill hasn’t been built, though the property has been identified, Sica said.

‘‘He declares himself absolutely innocent,’’ Sica said of the Salerno investigation.

The Vatican spokesman, the Rev. Federico Lombardi, told the AP earlier this week that the Vatican is taking the appropriate measures to deal with Scarano’s case. There was no further comment Friday from the Vatican about Scarano’s arrest.

Francis has made clear he has no tolerance for corruption or for Vatican officials who use their jobs for personal ambition or gain. He has said he wants a ‘‘poor’’ church and a church that is for the poor, one that goes out to the ‘‘peripheries’’ to minister to those most needy. He has also noted, tongue in cheek, that ‘‘St. Peter didn’t have a bank account.’’

On Wednesday, he named five people to head a commission of inquiry into the Vatican bank’s activities and legal status ‘‘to allow for a better harmonization with the universal mission of the Apostolic See,’’ according to the legal document he signed creating it.

Two of them are Americans: Monsignor Peter Wells, the No. 3 official in the Vatican secretariat of state, and Mary Ann Glendon, a Harvard law professor, former U.S. ambassador to the Holy See and current president of a pontifical academy.

American cardinals were among the most vocal in demanding a wholesale reform of the Vatican bureaucracy — and the Vatican bank — in the meetings outlining the priorities for the new pope in the run-up to the March conclave that elected Francis. The demands were raised following revelations in leaked documents last year that told of dysfunction, petty turf wars and allegations of corruption in the Holy See’s governance.

It was the second time in as many weeks that Francis had intervened to get information out of the IOR, a secretive institution best known for the scandals it has caused the Vatican. On June 15, he filled a key vacancy in the bank’s governing structure, tapping a trusted prelate to be his eyes inside the bank.
---------------------------
Several years ago, the Blog Chiesa brought to light one aspect of the Vatileaks that eventually would lead in part to Pope Benedict's resignation, as importance correspondence was taken from his desk by his butler and leaked to the press. Butler did it! But he said he did it to protect the Pope and expose corruption in the Vatican.

The bombshell letter was from our current papal nuncio in the United States, Archbishop Carlo Maria Viganò, and the back story by Sandro Magister can be read by PRESSING THESE PARAGRAPHS. This is old news but puts into a context what Pope Francis is trying to do to clean up the corruption in business transactions amongst other things in the Vatican. It does appear that the Secretary of State, Cardinal Bertone, does not come off smelling very well and did a terrible disservice to Pope Benedict who held him in high esteem. It may not amount to the Judas effect, but it is close!

Pope Francis has been, well, very FRANK, in denouncing careerism in the Vatican and money, wealth. We see why now. His candor has been unprecedented. He has been preparing the Church for this.

The other unprecedented candor is what he called the GAY LOBBY, in the Vatican and I think the other shoe is about to drop on it! I am sure Pope Frank's FRANKNESS, is rattling many in the Vatican and for good reason! We are now learning why POPE FRANK WAS ELECTED and his antipathy for lavish looking vesture.!

If 10% of the rumours are true, this is going to be very interesting.

How does a Bishop get to have $729,000 in their personal bank account?

Major corruption, of course he's innocent until proven guilty, at least in this country, not sure about there.

It would be grimly appropriate if the fiftieth anniversary of the election of Paul VI and his fateful recalling of the Council were to be marked by serious scandals.

Benedict XVI said we haven't yet seen the fruits of Vatican II. I think we may be about to.

Only in a mind darkened by evil is a scandal even "grimly" appropriate.

Anonymous, Holy Scripture is full of
"grimly appropriate " scandals brought about by the sin of pride and disobedience. Vatican II has borne rotten fruit. We are now reaping what we have sown.

Anonymous: As a student of history I can assure you that in the affairs of men a lot of things are "grimly appropriate" and the history of the Church is no exception.

BTW, why don't you come clean about who you really are? Most blogs don't accept anonymous comments on principle. In the pre-internet age I suspect you wrote letters in green ink.

Scandal is a sin. To suggest that sin is ever "appropriate" is to blaspheme against the Holy Spirit by whose power and action a faithful Christian can always reject sin and live in holiness.

There have been scandals in the Church before, and there plenty around at the moment. No-one is suggesting they are not sinful. But to suggest that to link cause and effect is a sin against the Holy Ghost is absurd.

John - The existence of scandals is not being questioned here. Your suggesting that the sin of scandal is ever "appropriate" is what I question.

Are there other sins that you would find "appropriate" in certain circumstances? I think not...