This was a baptism at last year's Easter Vigil: 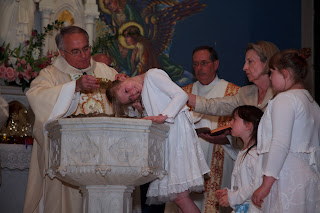 At Saint Joseph Church we offer the Sacrament of Baptism each Saturday at 11:00 AM. Families may plan accordingly. However, we do allow families the option of having their child baptized at one of our Sunday Masses. This option is never forced upon anyone though. The majority prefer the Saturday time slot independent of the Sunday Mass.

At our Sunday Vigil Mass on Saturday at 4:30 PM we baptized the 10th child of one of our families. Yes, I said #10. They home school their children, live about 20 miles away from the Church and deliver their babies at home usually with the aid of a midwife. Number 10, Michael Dominic, was born at home and without a midwife. All went well and mom doesn't' look any worse for the wear and in fact has her figure back and you'd never know she has had 10 children!

At our 12:10 PM ad orientem Ordinary Form Sunday Mass, a former parishioner who moved to Ohio to work is returning to the parish to have her adopted 3 year old child baptized.

Last night's Mass lasted about five minutes longer than normal. I usually finish the Vigil Mass, which starts at 4:30 PM around 5:20 or 5:25 PM. Last night we concluded at 5:30 PM! So no one can complain that the addition of the baptism at Mass made the Mass exorbitantly longer.

Oddly enough, my homily for this weekend speaks about Jesus' pro-life ministry rooted in the Old Testament as well. The example I used in the homily when I wrote it did not have in mind the baptism of the 10th child of a parishioner because when I wrote the homily I had forgotten that this particular baptism would be this weekend.

This is what I said in part in my homily this Sunday, the 10th Sunday in Ordinary Time:

The Church, meaning all of us, clergy and laity together, must be a strong defenders of human life from before conception to natural death!

We cannot as Catholics makes our lives so materialistic that we see children as a detriment in climbing the social latter.

You might have noticed that I said, that we as Catholics must defend human life from before conception. Isn’t this defense why the Church has reiterated time and time again her opposition to artificial contraception? The Church believes children to be an asset, much more valuable than a house, car or fancy clothes. Children are a blessing, not a curse. Those who are rich in children but poor in material resources or can’t keep up with the Jones are truly the rich, the liberated who understand the ecology of the human being and that money is not the center of a Catholic’s life. They are free to follow the Lord as Catholics. Pope Francis has stated the following: ““No, no, not more than one child, because otherwise we will not be able to go on exotic vacations, we will not be able to go out, we will not be able to buy a house. It’s all very well to follow the Lord, but only up to a certain point. This is what economic well being does to us: we all know what well being is, but it deprives us of courage, of the courage we need to get close to Jesus. This is the first richness of the culture of today, the culture of economic well being”.

The two widows in our readings today from the Old Testament and the Gospel tell how the economy of this period of time was unjust to women in general and widows in particular. With no husband, no inheritance rights and no voice, both were dependent on their sons, the man of the family to be their legal protector. When both lost their son, they not only lost the loves of their lives, but also lost their civil rights. Jesus is concerned about the disadvantaged in life, the widow, the child and those with no one to defend them and thus the Church must always stand up for the rights of the poor, the unborn and those God intends to be conceived. We are not to work against God as Catholics but with God.