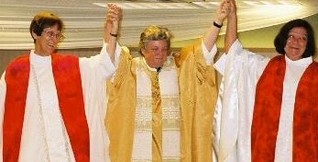 AP has an internet story about what the Pope didn't say about marriage as though this is some kind of a bombshell. You can read their spin HERE.

The gist of the AP story is in the following: Pope Francis waded diplomatically into the gay marriage debate Friday, telling the Archbishop of Canterbury he wants to work together to promote family values "based on marriage."

Francis, who vigorously opposed gay marriage in his native Argentina, and Archbishop Justin Welby chatted, prayed and had lunch together at the Vatican in their first encounter since both were installed in March.

Welby, the spiritual leader of the 77 million-strong Anglican Communion, has opposed proposed legislation in Britain that would legalize gay marriage, saying it seeks to abolish and redefine the institution and would weaken one of the cornerstones of society.

He delivered a speech last week before the House of Lords before it moved the gay marriage bill one step closer to becoming law. The legislation would enable gay couples to get married in both civil and religious ceremonies in England and Wales.

In his remarks to Welby, Francis said he hoped they could collaborate in promoting the sacredness of life "and the stability of families founded on marriage." He noted that Welby had recently spoken out on the issue, a reference to his House of Lords speech.

Significantly, though, Francis didn't specify that marriage should be based on a union between a man and woman, which is how Benedict XVI and John Paul II routinely defined it in a way that made clear their opposition to same-sex marriage.

MY COMMENTS: The last paragraph seems to be grasping at straws. When the Bishop of Rome, any bishop in union with him, a priest or a deacon speaks of marriage in a religious context, he is speaking of marriage, not some bogus remake of it. Would AP deduce from Pope Francis' remarks that polygamy is okay since he wasn't specific of two people of whatever gender. You get my drift.

The Catholic Church is very clear on what marriage is and what it isn't. Does Pope Francis really need to go into specifics?

Just this morning in the Macon Telegraph's religion section, the headline was: "Women Becoming Priests Without Vatican Blessing." You can read the story HERE.

The gist of that story can be found in the following ridiculous statement:

The priest was ordained in a purple Lutheran church. The Communion bread, symbolizing the body of Christ, was gluten-free. The congregation prayed to “our mother our father in heaven.”

But the real departure from Roman Catholic tradition was evident when Maria Eitz approached the altar one Sunday last month for the laying on of hands that turns parishioner into priest.

MY FINAL COMMENT: The reporter either has an agenda or is extremely stupid about the Catholic Church or both.

"And like male priests the world over Rue urged parishioners 'Let us proclaim the Mystery of Faith' to which the group responded in the usual way 'Christ has died, Christ is risen, Christ will come again'". That should please the whingers over at PrayTell. They won't be happy with the binding of hands, though; this was part of the OLD ordination rite.