BOMBSHELL! POPE FRANCIS, THE ARCHBISHOP OF ROME, TELLS THE NEW ARCHBISHOP OF CANTERBURY THAT HE IS GRATEFUL TO POPE BENEDICT FOR THE ANGLICAN ORDINARIATE!!!!!!!!THE HERMENEUTIC OF CONTINUITY BETWEEN THE TWO PAPACIES ONCE AGAIN!

JUSTIN TWO OF THEM! 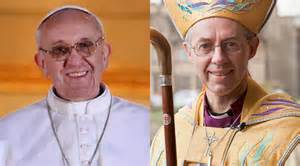 Yes, in front of Archbishop Justin Welby, the new Anglican Archbishop of Canterbury, the Archbishop of Rome tells him that he approves of Pope Benedict's authorization of the Anglican Ordinariate for disaffected Anglicans!!!!!!!! It doesn't get any better than this folks!

The Archbishop of Rome's exact words: "I am grateful, too, for the sincere efforts the Church of England has made to understand the reasons that led my Predecessor, Pope Benedict XVI, to provide a canonical structure able to respond to the wishes of those groups of Anglicans who have asked to be received collectively into the Catholic Church: I am sure this will enable the spiritual, liturgical and pastoral traditions that form the Anglican patrimony to be better known and appreciated in the Catholic world."

If this ain't the "hermeneutic of continuity" with Pope Emeritus Benedict XVI, well I don't know what is. And to boot, the new pope is collaborating with the old pope in writing his first encyclical on faith, using much of what the old pope has already prepared. In fact the new pope said just yesterday that four hands are writing the new encyclical on faith. I, for one, can't wait for it and I'm sure it will be a BOMBSHELL!

1) You neglected to correctly designate the title of the Protestant. "Archbishop" of Canterbury should be in quotation marks, or he should be referred to as the "so-called Archbishop of Canterbury."

I'm sure Ms. Ferrone at PT will rush to amend her swift condemnation of all things continuous between papacies, posted yesterday.

RE: "Archbishop of Canterbury:" You mean the head of that nationalist group founded on adultery by Henry VIII and blood red with the murder of Priests, wives, and others of his enemies? You mean that museum of neo-Platonic theology? You mean that crowd who sat silently by and allowed the Episcopal/Anglican church to come to this sorry pass and now run whining to the Catholic Church to let them in? Oh, I see, that church...

Colonel - It is not proper practice to refer to those whose orders we do not recognize by using quotation marks, a la "Archbishop," or to say "so-called Archbishop" when speaking of or to them.

This is the practice of the Holy See and should be ours as well.

Thank you for clarifying that, Pater Ignotus. I didn't realize that it is the Holy See's policy to support the pretentions of false religions and fake orders. I stand corrected.

Just because it is the practice of the Holy See doesn't mean we must adopt it. He's not an archbishop any more than I am and to give him the honor due to an actual archbishop (by invoking the title) is not charitable and potentially scandalizes people.

Bishop has a technical meaning, as you, Fr. Kavanaugh, have previously argued in these very comments. It is not applicable to those lacking the charism and the Order.

I shan't argue this point further. I only wished to show my support for those who are correct against he who is incorrect.

Unlike most of the commentators on this blog, I was educated at a Grammar School established by a pre-Reformation bishop (Foxe of Winchester) who was commemorated at a special service annually; which had close ties to the Church of England, whose medieval parish church was opposite the medieval 'Old School'; and whose Old Boys included Lord Burghley, the poet laureate Colley Cibber, and Sir Isaac Newton.

The Head Master was a classicist and Sinologist who had been interned by the Japanese during the War and badly tortured. He was the epitome of the Christian gentleman. In those days (the 1960s) the Anglican Church was still sure of itself and probably less inclined to follow secular trends as was the Catholic Church in those days.

No-one in the United States has the slightest understanding of the Church of England. It may have the parish churches and cathedrals of Catholic England but it looks after them very well, and ensures there is a liturgical and musical life in them - in contrast to what happens in Catholic countries in Europe.

In Victorian times the Anglo-Catholic priests were building magnificent churches and celebrating a decent liturgy, while at the same time going out into the slums to try and win the souls of the poor, as were their Catholic counterparts. Newman and Manning were both former Anglican priests.

An Anglican patrimony? Ask Fr John Hunwicke, whose ordination last year I attended at the Oxford Oratory, and who knows far more about the liturgy than does the current Pope.

John Nolan: It's been my experience that neither Catholics nor evangelical Protestants--even well-intentioned ones--understand even the American brand of Anglicanism (I don't here speak of the stuff that has happened since the '70s), much less the pure version you write of. I've seen this over and over again. I also have never met a former Anglican-turned-Catholic who believed that Catholics "got it" in regard to them. Every Anglican-turned Catholic I know was handled more or less roughly and triumphlistically by Catholics while they were swimming the Tiber. We joined up despite the very chilly and tone-deaf "welcome" we received. To paraphrase Cardinal Newman, "Anglicanism is a deep matter--you cannot take it in a teacup." (J. H. Newman to J. Spencer Northcote, Feb. 8, 1846.)

And before the rest of y'all start throwing mud at me--remember, I'm Catholic. This isn't an apologia for Anglicanism. If I'd wanted to offer an apologia or thought Anglicanism salvific, I would have stayed Anglican. But there's no way I can use the format and brevity of this forum to help readers "get it." I'd be happy to meet over coffee (well, a smoothie) and try to explain some time.

I'm a fan of the Anglican Ordinariate in the abstract. I think they could have chosen a better liturgy, for example, and I'm not totally certain what Anglican patrimony is (I come from the Atheistic patrimony, which I was not allowed to continue celebrating when I became Catholic).

Still, there is an ordinariate parish in my archdiocese. If it were closer, I'd probably go there regularly since there's no regular TLM (yet). I hope to check it out one day anyway.

I agree with John Nolan and Anon 5. My entire religious experience before becoming Catholic was Anglican. Although I did not attend church, I did attend an Anglican school service every day in the 1960s, England still having an established church of course. I became a Catholic, through the grace of God, some years after I started attending Mass when living in Europe. However, it was not because I thought the Anglican Church was “a false religion” but because it seemed incomplete/deficient and I wanted to join the Church that possessed the fullness of Truth and an unbroken history from the very beginning. But without the good preparation from my daily religious service at school (led btw by a very fine and upstanding Anglican headmaster who used to play soccer as goalkeeper for the England under-23s), my journey would undoubtedly have been different. Also: C.S. Lewis anyone?

Perhaps my openness to ecumenism and inter-faith dialogue, all in accordance with Vatican II norms of course, is due in some part to having acquired the Anglican sensibility for tolerance along the way, as well as an understanding of the sad and bloody history that occurred, and still occurs, in its absence and that surely is offensive to God as humans throw back in His face His precious gift of life – in His name no less! This is one more reason why I find so powerful and persuasive Pope Francis’s sentiment that “To kill in the name of God is blasphemy.” And I was, and am, proud to belong to a church that recognizes the truth and the good that exists in other faith traditions.

Regarding titles and forms of address, surely these are matters of social convention and expressions of courtesy, not theological statements, any more than calling some leader of an authoritarian unelected government “President” is a statement of political philosophy (Gene: No Obama quips please).

Marc - No one is scandalized - unless, like you he is looking for reasons to be scandalized where none are to be found, thus giving him a raison d'etre - by our calling an Anglican archbishop "Archbishop."

I prefer to do as the Church does in this regard. You choose to wander off into your own little dark world where everything is made according to your own un-historical imaginings.

Colonel - I am sure there are many things about the Holy See and its practices that you are unaware of. It is good that you are able to add to your awareness of things ecclesiastical.

As a small point of order, there is no "Archbishop of Rome." There is only a "Bishop of Rome." Rome, by custom, is not an archdiocese, but a diocese.

Archbishop of Rome was tongue in cheek so as to make sure that the two "archbishops" were on equal footing!

The first episcopal appointment in GB (where several sees are vacant) under the new pontificate was announced this week. Bishop Alan Hopes, an auxiliary at Westminster, is the new bishop of East Anglia. Bishop Hopes was an Anglican priest who converted in 1994 (when the CofE voted to ordain women) and was the episcopal delegate to the Ordinariate when it was being established. He has also celebrated Pontifical High Mass in Westminster Cathedral (usus antiquior). Neither Archbishop Vincent Nichols nor Pope Francis have ever celebrated the traditional Mass.