THE PAST/PRESENT AND THE PRESENT/FUTURE IN THINGS LITURGICAL AND ARCHBISHOP SAMPLE'S PROPHETIC AND BOMBSHELL INTERVIEW ON THE LITURGY!

This is the past/present and it is hilarious!
The following prophetic interview is present in some places, but certainly the future, please God (present/future):

Archbishop-elect Sample on Sacred Music and the Traditional Latin Mass 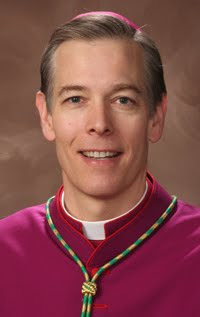 CWR: The Archdiocese of Portland is home to Oregon Catholic Press, which produces missals and liturgical music materials used by two-thirds of our country’s Catholic churches. You have developed an interest in the liturgy—in fact, you’re writing a pastoral letter on the topic. Can you share with us some highlights of that letter?

Sample: Yes. It is on pastoral music, and is just being released. We just hired a new director of sacred music, and this will be his road map. It will be my last contribution to the life of the Church in Marquette.

In this letter I discuss the liturgical movement of the Church, what Vatican II said about liturgical music, documents released on the topic after Vatican II, as well as writings by popes about [liturgical music]. It is not my vision or my ideas; I try to present the Church’s vision.

It is clear that the Council calls for the liturgy to be sung. In recent decades we’ve adopted the practice of singing songs at Mass. We take the Mass, and attach four hymns or songs to it. But this is not the Church’s vision. We need to sing the Mass. It is meant to be sung. The texts of the Mass are meant to be sung.

The Church provides us with chant, which is integral to liturgy, and should inspire the music of the Mass. We need to get away from singing songs at Mass and return to singing the Mass. And Gregorian chant is best suited to the Mass. The new director I hired [in the Diocese of Marquette] will introduce chant. It will be a huge shift for the people.

I mean no criticism of our sacred musicians, who are very dedicated. It will be a shift for them as well.

And, in addition to Latin chant, we also need to introduce chant in English. Although the Second Vatican Council said that chant should be given “pride of place,” one rarely hears it in parishes. Music is an important part of celebrating the Mass. As Pope Benedict has said, if we get the music right, we’ll get the spirit of the Mass right.

CWR: Where have you seen liturgy and liturgical music done well?

Sample: The parishes I’ve visited have all different levels of quality of music. In my formative years, the liturgy at the Church of St. Agnes in St. Paul, Minnesota, led by Msgr. Richard Schuler (1920-2007), was outstanding. More recently, the liturgy and music at the National Shrine of the Immaculate Conception for the March for Life was spectacular.

CWR: You’ve been involved in ordinations for the Fraternity of St. Peter, which celebrates the traditional liturgy of the Roman rite. What do you like about the pre-Vatican II rite of the Mass, and will we be seeing more of it in Portland?

Sample: I appreciate the Tridentine liturgy. I am 100 percent a product of the Second Vatican Council, in that I grew up in its wake, and all my formation was post-Vatican II. Therefore, my fondness for the Tridentine liturgy is not based in nostalgia. Having been exposed to it, I’ve gained a great appreciation for it.

What sparked my interest in it was Pope Benedict’s 2007 motu proprio Summorum Pontificum [granting greater freedom to priests to celebrate the older form of the liturgy]. I thought, “I’m a bishop of the Catholic Church, and it’s my responsibility to know how to celebrate Mass according to both the new and old rites.” I’ve learned the Tridentine liturgy, and have since celebrated three Pontifical High Masses and Masses for the Fraternity of St. Peter and the Institute of Christ the King (in Florence, Italy).

I believe that Pope Benedict wants the Extraordinary Form of the Mass to influence liturgical reform, to lead to a reform of the reform, because in some areas we’ve gotten off track. He wants the pre-conciliar liturgy to help shape the new liturgy and help reconcile us with the past. If the Tridentine Mass was once beautiful, it cannot now be harmful.

The Tridentine Mass certainly has many strengths; for example, it clearly stresses the sacrificial nature of the Mass. It also draws many young people who did not grow up with it. They’re discovering their heritage and tradition. It’s providing them with something they’re not finding in the ordinary form. We need to pay attention to that.

When I arrive in Portland, I’ll find out the status of the Tridentine Mass, and see if there are stable groups who want it. As their archbishop, I’ll do what I can to make it available. 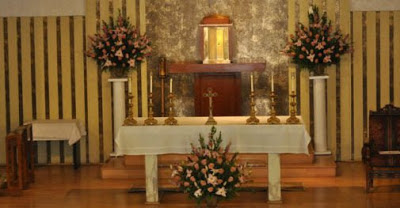 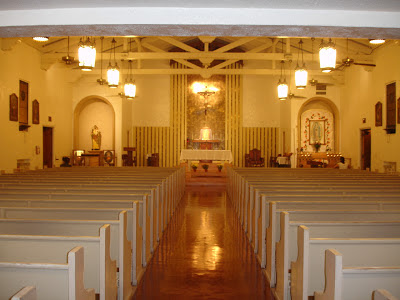 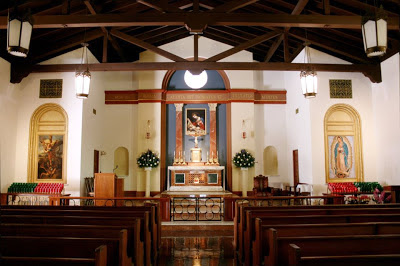 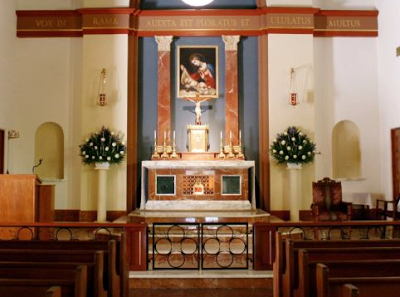 MY COMMENTS: Archbishop Samples hits the nail on the head in his interview when he says: "I believe that Pope Benedict wants the Extraordinary Form of the Mass to influence liturgical reform, to lead to a reform of the reform, because in some areas we’ve gotten off track. He wants the pre-conciliar liturgy to help shape the new liturgy and help reconcile us with the past. If the Tridentine Mass was once beautiful, it cannot now be harmful."

The opposite is true too. What is now ugly, such as sloppy, creative, dumbed down celebrations of the Ordinary Form of the Mass, non traditional church architecture and sanctuary designs that are stripped down, plain, blah and with altars that look like free standing ironing boards without altar railings, not to mention the guitar tripe that is so truthful in the satire of the video above that is now so ugly that was and is sooooooo harmful!!!!!!

Archbishop Sample is just simply prophetic and liberal but in a traditional kind of way. I hope other bishops are listening to him and I hope Archbishop Sample becomes the Primate of America at least as Liturgy Czar! I nominate him for that!

So, which do you like best? Past/present or present/future?

Archbishop Sample clearly is present/future and represents what is in store!

Oregon Catholic Press which influences about 80% or more of Catholic parishes in terms of the guitar tripe in the video above (although they also have some traditional resources) is in the new Archbishop's Archdiocese. I recommend that Oregon Catholic Press fasten it seat belts, the ride to the present/future might get bumpy, but oh so fun for them and those they influence, the majority of Catholic parishes!

That video is hilarious. As someone who groans the minute he sees a folk group tuning up before Mass, it's wonderful to watch the formulaic, contrived, pabulum that we are fed week after week mocked. What is especially delicious is to see a young person, the very "target" the geritol hippies think they are reaching, doing the mocking. NOW, how many more years do we have to wait for enough of these people to die before we can eliminate this kind of "music" once and for all?

His Excellency states, "In my formative years, the liturgy at the Church of St. Agnes in St. Paul, Minnesota, led by Msgr. Richard Schuler (1920-2007), was outstanding."

His Excellency and I are from the same school, literally. I have known him since he was hanging around St. Agnes. What he is promoting is what I am promoting.

"I believe that Pope Benedict wants the Extraordinary Form of the Mass to influence liturgical reform, to lead to a reform of the reform, because in some areas we’ve gotten off track," Archbishop Sample says.

His Excellency says, "I am 100 percent a product of the Second Vatican Council, in that I grew up in its wake, and all my formation was post-Vatican II. Therefore, my fondness for the Tridentine liturgy is not based in nostalgia. Having been exposed to it, I’ve gained a great appreciation for it."

I know, I know...I'm a prophet too...perhaps my views aren't so far off the mark. And perhaps there is some validity to them.

It's time to rethink. We have bishops now saying what I've been saying. In actuality, His Excellency and I (as well as others from "The Farm") have been saying the same thing for years...I just hope now, people will start listening, a little.

Part of the problem is taking this out of context. "The Mass should be sung" is taken out of context to mean "let's all hold hands and sing hippie folk tunes at Mass". No, in the proper context, "the Mass should be sung" actually means it should be CHANTED. Pastors and especially musical directors need to have that simple fact brought to their attention, as it is currently ignored in favor of the out-of-context misinterpretation of singing the Mass.

That isn't part of the problem, that IS the problem. The whole of Vatican Council II was taken out of context.

It is most obvious in the liturgy, but it applies throughout. When a Council, which is normally called to define something doesn't define anything, we then have a major issue. And that issue is context.

Welcome to the Church in the post-Conciliar age.

Bishop Sample is in the same mould as our own Mark Davies, Bishop of Shrewsbury, who is a mere 18 months older and was appointed in 2010. Great news for the future of the Church.

I wonder what his first board meeting with OCP will be like... awkwaaaard.......

I do pray that Abp. Sample will descend on OCP like an avenging angel, however, CIA needs a similar cleansing. And please, someone, banish the use of anything with Marty Haugen's name on it.

Andy, I agree the documents were taken out of context. It appears that individual paragraphs were seized upon, and the rest discarded. In particular, SC 37-41, which appear in context to have been meant for missions in vastly different cultures, were applied wholesale in North America.