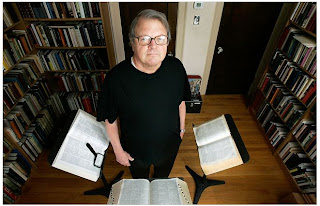 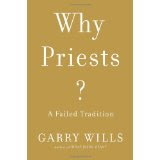 This is a synopsis of the book from Amazon's website selling his drivel:
Book Description
Release date: February 12, 2013
In his most provocative book yet, Pulitzer Prize­–winner Garry Wills asks the radical question: Why do we need priests?

Bestselling author of Papal Sin and Why I Am a Catholic, Garry Wills spent five years as a young man at a Jesuit seminary and nearly became a priest himself. But after a lifetime of study and reflection, he now poses some challenging questions: Why do we need priests at all? Why did the priesthood arise in a religion that began without it and opposed it? Would Christianity be stronger without the priesthood, as it was at its outset?

Meticulously researched, persuasively argued, and certain to spark debate, Why Priests? asserts that the anonymous Letter to Hebrews, a late addition to the New Testament canon, helped inject the priesthood into a Christianity where it did not exist, along with such concomitants as belief in an apostolic succession, the real presence in the Eucharist, the sacrificial interpretation of the Mass, and the ransom theory of redemption. But Wills does not expect the priesthood to fade entirely away. He just reminds us that Christianity did without it in the time of Peter and Paul with notable success.

Wills concludes with a powerful statement of his own beliefs in a book that will appeal to believers and nonbelievers alike and stand for years to come as a towering achievement.

MY COMMENTS: I would now be laughing if it weren't so sad. I am taking this weekend off having celebrated a small wedding in Augusta yesterday for close friends of mine. So I have the leisure this Sunday morning to pray a private Mass at home (something I seldom do and can count on one hand the times I have done so, although there is really no such thing as a private Mass for the saints and angels are all present at the one eternal Mass that every Mass is simply a share in "time") but I digress.

CNN at about 8:30 AM EST had an interview with Gary Wills who is indeed a heretic, and a Protestant theologian. The Protestant stated that he agreed with most things Gary Wills has written in a recent book since most of what Gary Wills writes is Protestant! Thank you, thank you as CNN had no real, believing Catholic theologian to confront Gary Wills' heresies.

What CNN did this morning is so much a part of the wider agenda against the true Church that occurs within and outside of the Church, CNN being outside and purely secular. They actually made Gary Wills look like a legitimate Catholic in addition to calling him an author and theologian. It really is insidious and for Catholics, now two generations of them, who were not taught the integrity of the true Faith, only coloring book Catholicism, what Gary Wills spews forth will be music to their ill-informed and poorly formed Catholic faith. Other Catholics, practicing their faith and having actually studied it and are believing, will see in Gary Wills the heretic he is.

But this is the sad thing. I felt I was in a few of my seminary classes (the more radical ones, not all were of course) where the Church of the future was presented as Gary Wills did so this morning.

He says the Catholic Priesthood is a failure and that the early Church didn't have any except when the Church was still united to the Temple sacrifice of the Jews prior to the separation from Judaism that occurred a half century or more later after the death of Christ.

YES, GARY WILLS WANTS TO DO AWAY WITH THE CATHOLIC PRIESTHOOD. HE SAID SO ON NATIONAL TV. IT IS TO LAUGH AND CRY AT THE SAME TIME, FOR HIS IMMORTAL SOUL, PLEASE PRAY, AND FOR THE SOULS HE LEADS INTO PERDITION, PLEASE PRAY.

IT IS HIS THEOLOGY, SO PROMINENT IN PEOPLE HIS AGE, WHO WERE ON THE CUTTING EDGE OF HERETICAL RENEWAL OF THE CHURCH IN THE 1960'S AND 70'S AND WHO STILL HANG AROUND AND REFUSE TO RESIGN FOR THE GOOD OF THE CHURCH, THAT HAS LED TO THE CORRUPTION OF SO MANY CATHOLICS IN THE PRIESTHOOD AND LAITY AND THE PROLIFERATION OF SEXUALLY ACTIVE CLERGY AND RELIGIOUS WHO MAKE IT UP AS THEY GO AND TAKE ADVANTAGE OF THEIR STATUS TO DO SO AND ABUSED SO MANY BODIES AND SOULS. THERE HAS TO BE A DEEP PLACE IN HELL FOR PEOPLE LIKE GARY WILLS AND HIS MINIONS.

WHEN YOU SET YOURSELF UP AS AN AUTHORITY AND DO AWAY WITH LEGITIMATE AUTHORITY, ANYTHING GOES, ANYTHING AND IT HAS UNFORTUNATELY THESE 50 YEARS ALL DUE TO PEOPLE LIKE GARY WILLS, HANS KUNG, CHARLIE CURRAN AND MANY, MANY OTHERS. PRAY FOR THEM AND THEIR IMMORTAL SOULS.

Stephen Colbert interviewed him a few weeks ago and wonderfully showed the contradiction between Wills calling himself a Catholic and what he writes. In between laughs, Colbert did a great job defending the priesthood and the Eucharist. I never thought the Eucharist would be defended so well in late night comedy!

Father Pablo, I don't watch Steven Colbert, let alone much television at all.

That's hilarious! No priesthood in the early Church? I guess no one baptized all those early converts either. They probably just "personally accepted Jesus Christ as their Lord and Savior." Where did Wills study theology? At the Jack Chick Institute?

Seriously, if this guy had any guts, or for that matter, conviction, he would do an on-air debate with Karl Keating or Patrick Madrid. They'd take him apart.

What the interview shows and faithful Catholics know is that the progressive or liberal "spirit" of VII brought to its logical conclusion is what Gary Wills believes and what so many post-Catholic of his liberal generation want the Church to embrace. They are losers in the saddest and most profound way!

Yea Colbert does a good job, you just have to get through some of the crazy antics he has to do for late night entertainment! He teaches CCD at his parish, and back in September, he and Cardinal Dolan had a forum on Humor and Joy in the Spiritual Life. Even when his character gave us Catholicism for Lent a few years back, he would still get basic tents across to his audience.

Of course, this interview now explains why this book recently shot up to #1 in the Catholicism section of Amazon...

Plus, he isn't even saying anything new (what Catholic hasn't heard umpteen arguments about how this, that, or the other thing does away with the need for priests?). What is it about Coloring-Book Catholicism that makes most of its adherents, it seems, behave as though they're the first or only ones ever to color outside of the lines?

This sort of barnyard walking hazard only gains traction because we have let knowledge of our Church history and Liturgy in the hands of people with agendas other than that serving God. I suppose Colbert might be sneaking one over this jerk by giving him air time. Too bad Art Bell is give; that would be the perfect venue for this fellow.