A SOBER PAPACY COMES TO A SOBER CONCLUSION 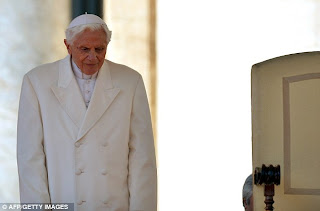 Understated, that is how I would describe the pontificate of His Holiness Pope Benedict XVI. He was also a realist and never in a state of denial about the crisis of the Church these past 50 years since the opening of the Second Vatican Council.

This was His Holiness take on things as he opened the "Year of Faith" and the celebration of the 50th Anniversary of the Opening of the Second Vatican Council:

"...I would say, however, that our joy is a more sober one, something more humble. Over these fifty years, we have learned and experienced that original sin exists, and that it translates itself into personal sins which can become structures of sin. We have seen that even in the Lord's field there is discord, that even in the net of Peter we find bad fish, that human weakness is present even in the church, that the ship of the church journeys in the face of an opposing wind, amid storms that threaten the ship. And sometimes we have thought that 'the Lord is asleep and has forgotten us.' But this is only one part of the experience of these fifty years. We've also been made to experience the presence of the Lord, the gifts of his goodness and strength."

The greatest threat to the Church is the left, not the right. Certainly the "right" can be rigid and appear to be uncaring and unforgiving. They can appear to be militant and strident at times. But they don't abandon the ultimate truths of the Church although they are sinners like the rest of humanity. They do not participate in "practical apostasy" when it comes to the faith and morals of the Church.

The left, however, is a different story. What began first as a theology of "renewal" has devolved into practical apostasy and heresy, the logical conclusion of a flawed hermeneutic and doctrine. Many places in Europe, Belgium in particular, this practical apostasy is quite evident from liturgy to lifestyle as it is here in the USA.

The most honest appraisal of it from a group that can be quite dishonest about their motives and agenda was from Gary Wills, that famous and infamous author. His honesty is breathtaking and quite sad, but at least he lays it on the table for all the see. Yet he still claims to be a Catholic. How can he? That is the delusion of the leftist progressives. They are out to destroy the true Church (of course they can't and never will)and impose their own construct of it on the rest of us. Or they are trying to take away as many practical Catholics as possible into their apostasy and heresies.

Thus we hear in Gary Wills the logical conclusion of leftist Catholicism that is both progressive and schismatic as well as heretical. Yes this appeared on Comedy Central, but there is nothing funny about a soul's descent into hell:

Thank you Holy Father for trying to spare us from the "filthy" type of Catholicism, the bogus, inverted form, ultra-contaminated one that is that of Gary Wills and others less honest than he! Long live the Pope!

That Colbert knows his stuff.

Sometimes, it takes a comedian to point out that coloring-book Catholicism is a sick joke.

"What you see is the bread and the chalice; that is what your own eyes report to you. But what your faith obliges you to accept is that the bread is the body of Christ and the chalice is the blood of Christ. This has been said very briefly, which may perhaps be sufficient for faith; yet faith does not desire instruction" (ibid., 272).