DESIRING THE PERFECT IN AN IMPERFECT WORLD

There is a great deal of foment in the world of liturgy today and much of it is grassroots. We see how churches that were once stripped of their pre-Vatican II beauty in favor of a Presbyterian look that John Calvin would love are now "re-enchanting" their liturgical architecture. And new churches that once looked like something that McDonald's or Burger King would build are now being designed with an eye to tradition.

Saint Teresa Church in Grovetown, Georgia (a suburb of Augusta in the Diocese of Savannah) whose pastor is Fr. Mike Ingram, has come up with this design for their new suburban church: 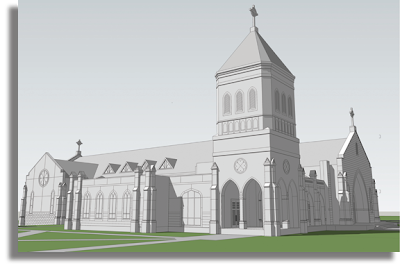 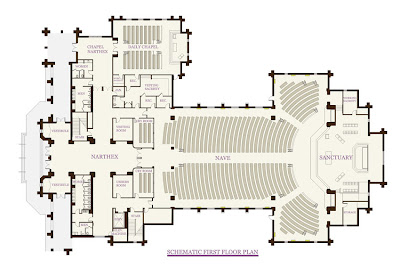 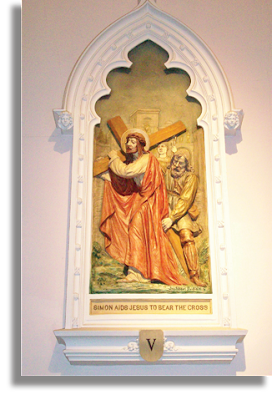 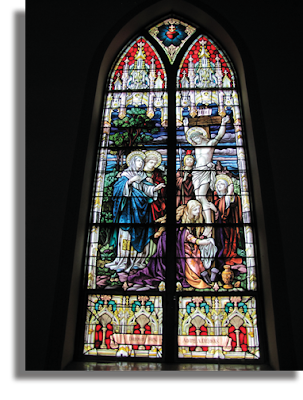 The parish is working with King Richards of Atlanta which salvages liturgical art from magnificent closed Catholic churches in the northeast. St. Teresa has acquired a traditional altar with reredos, marvelous stations of the cross and stain glassed windows.

Kudos to Saint Teresa's for not buying into the Calvinistic approach to building new Catholic Churches.

The Reform in Continuity new liturgical movement is very, very different than what Vatican II did in terms of a shoving of a particular vision of it down everyone's throat in a lockstep fashion in the 1960's (in other words, Vatican II implemented in a pre-Vatican II way).

The renewal that His Holiness Pope Benedict XVI is implementing is one of invitation and giving example but not mandating. And it is catching on around the world, maybe not like wildfire, but it is catching on like the small mustard seed that is sprouting into some that will be very big and very grand.

For example, I would have never thought 5 years ago that we would have one Sunday Mass ad orientem for the Ordinary Form, that we would be celebrating the older Tridentine Mass and that people would have the personal choice to either stand or kneel comfortably at a kneeler for Holy Communion and that intinction would be as well received as it has been.

All of this is liturgical renewal without forcing anyone into a lockstep across the board. And what I have seen in my parish is that more and more people (not all certainly) are choosing to kneel as they witness others doing it. And yes there is a developing sense of a recovered piety and reverence at Mass not experienced since Vatican II!

I often wonder what path the liturgical renewal had taken if Pope Paul VI had been more like Pope Benedict and allowed the Tridentine Mass to co-exist side by side with the missal of 1970? Would we have had all the upheavals we've had?

Only in heaven will we be able to see on our heavily iPads parallel history to determine various outcomes depending on the road chosen.

I think that the impotice for this falls on something that Archbishop-elect Sample said in his interview, "...my fondness for the Tridentine liturgy is not based in nostalgia. Having been exposed to it, I’ve gained a great appreciation for it."

This, I think is key. For the majority of Catholics today who are either adhering or becoming adherents to the TLM; we see that they are not 53 or older, but rather they are almost all product of the post-conciliar era. This speaks volumes.

I think the other point he makes is related to this and speaks as much to the mindset as anything said in the last 10 years or so. His Excellency says, "I believe that Pope Benedict wants the Extraordinary Form of the Mass to influence liturgical reform, to lead to a reform of the reform, because in some areas we’ve gotten off track."

The bottom line is, in my estimation, that we're not going to find the answer in the Mass that we currently call the OF or Novus Ordo. It is too far gone. I think that the innovations must go. This includes everything from orientation, to language, to music, to use of extraordinary ministers, to ceremonials.

The Mass should be retired to the annals of history. It is, as the Holy Father states, "fabricated, banal, and on-the-spot."

While it is valid, validity doesn't equal goodness. When the abuse overrides the validity, then it is time to return.

This is a good example, let's say I go to confession to a priest of the parish next to my home parish. I confess that I have been having an affair with my next door neighbor (who is stupid hot and incredibly single). Father gives me absolution after I make a good confession. As I'm praying my penance, Father comes up to me and says, you've prayed enough, I completely understand your situation, your wife deserved it, everyone knows she's a B!7@# anyhow, then sends me on my way as he locks up church. The sacrament was valid, but the deficiency caused by the abuse lessens the grace and efficacy of the Sacrament.

THE VERY SAME THING APPLIES TO THE NOVUS ORDO. The perversion of the Mass, by Paul VI, Bugnini, and the Consilium may be valid, but the deficiency caused by the abuse lessens the grace and efficacy of the Sacrament.

We must return to the TLM, ditch the Novus Ordo and then we can start an authentic "Reform of the Reform," if that is still in the cards. Who knows...maybe that horse has left the barn and a reform isn't needed, just a restoration. Now there's a thought, huh?

"All of this is liturgical renewal without forcing anyone into a lockstep across the board."

...and that's probably the best way, and a good point to make. While something is problematic and unacceptable for very good reason-- namely that it's not a matter of "taste" or "style" in the subjective sense, but a matter of the objective and what we profess to believe-- and we should say so as often as necessary, too much impatience is not a good thing. Patience toward the objectionable is not the same thing as saying that it's okay.

What's wonderful about this grassroots sense of recovering piety is that we are learning anew what it means to believe in the Incarnation (which, unless I'm totally running off the rails here, probably does speak to taking prohibition of "graven images" out of context). At least here in the U.S., one often hears the objection that Catholicism is too "complicated," and that things ought to be "simple." Well, the Eucharist does make things simple and accessible in the most intimate way, and one's understanding deepens and unfolds over time (why, for the love of God, do we think that we ought to understand everything about everything all at once?!). But if God is Being Itself, then it should stand to reason that "simple" does not equal simplistic, and simple does not amount to a form of romantic and nostalgic primitivism. As for the Incarnation itself, Benedict XVI referred to its "daring realism" of late.

I hope that I'm not being too harsh or unduly uncharitable, but it seems that the irony to be found in similar accusations, and certainly accusations of "saint worship" and "idolatry," is that when we have stripped-down bare walls, we lose focus: our minds wander elsewhere, our feelings roam free, whereby we think we're free to make God in our own image or the image of our desires, and we most certainly find the objects of our worship-- indeed our idols-- elsewhere. It's as though heart, mind, body, and soul are directed everywhere else and thus nowhere all at once.

Only in heaven will we be able to see on our heavily iPads parallel history to determine various outcomes depending on the road chosen.

At the very least, the next time someone wants to endlessly "dialogue" about "simplicity" in a way that really amounts to dumbing down the Catholic faith as an excuse for accepting any and all modern heresies like the worship of commodified convenience, we can probably say with all honesty that we tried that sort of thing before, and it most certainly didn't work. It also reminds us human beings of our limits, as Deacon Greg Kandra's "change of heart" re altar rails actually conveyed: sometimes, we need external reminders. Because internally, we can forget. Earthen vessels, indeed.

The architecture may be Calvinistic, but the accompanying theology is anything but. One gets you ten that those who build such churches are universalists--_everybody_ gets saved (except perhaps for pre-Vatican II adherents and those who command oppressive social institutions, who will roast in Hell eternally).

This is beautiful! And from a parish that, only a few years ago, didn't seem to have a solid direction. How much can change in such a short time. Looking at the parish website, however, reveals one troubling bit of jargon: The fund-raising page keeps referring to the new Church as its "worship space." C'mon St. Teresa! Leave the PC language for the Protestants! You are building a CHURCH! It will be a sanctuary for the Holy Sacrifice of the Mass! Every day the miracle of Transubstantiation will take place in this Holy Church. This miracle is available only to Catholics! If you want "worship space" go to the chapel at Bob Jones University!

Make the priests and deacons seats face the side wall of the apse instead of the people--I don't care to look at Father's smiling face--I hate the thrust stage, put an altar rail in, love the rest!

With regards to the aesthetics, as they say, God is in the details...something I can tell this will be deficient on overall. On the hoof, it reminds me quite a bit of St. Mary on the Hill in Augusta, GA, with obvious variations, but it's at least good to know that they are using salvaged portions from King Richard's...I imagine the reredos and stained glass windows will help the space immensely, whatever its other shortcomings!

Odd that you say that Joel about St. Mary's as that is exactly what I thought and St. Mary's is the pastor's childhood/adulthood parish!