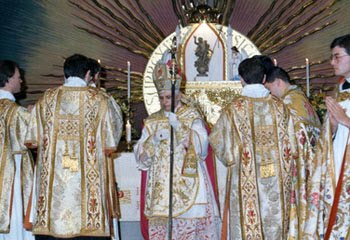 No matter who is elected pope, I do not think anything that Pope Benedict has brought about or allowed, especially through papal decree, such as Summorum Pontificum will be undone.

So if a pope is elected who has never celebrated the 1962 missal since SP was issued I don't think there is any cause for alarm. Keep in mind the vast majority of cardinals have not chosen to do so. But neither has Pope Benedict as pope.

The following are the cardinals who have celebrated both forms of the one Roman Rite when this became the norm for the Universal Church:

No matter who is elected pope, I do not think anything that Pope Benedict has brought about or allowed, especially through papal decree, such as Summorum Pontificum will be undone.

Funny. I'm sure that's what Pope Pius V thought back in the day when he issued his papal decree on the Mass, as well...

It turns out, though, that change is the name of the game for papal decrees. Especially in these modern times where "recentism" seems to rule the day.

How pathetically small this list is. 118 voting age Cardinals and 11 have offered the EF. Less than 10 percent. No wonder poor Pope Benedict is calling it quits. How can you lead when your own army won't follow?

Maybe Pope Benedict never offered the EF (yet) BUT HE SURE DID WHEN HE WAS CARDINAL RATZINGER.

I should think that the percentage of diocesan bishops is even lower. No matter - it is the younger generation who are pushing for tradition. The young priest who celebrated the TLM I attended last Sunday (impeccably, with rapid and fluent Latin) isn't going to unlearn it, whoever the Pope may be.

I hope and pray one of these cardinals will be elected pope. The ones I am rooting for the most are Pell and Llovera and Ranjith.

Personally I hope we do not get an African pope. The last thing we need is a "Pope Obama" (as I'm sure Arinze would have been had he been elected in 2005 - - and if I recall he was the one the media hyped and supported the most, ie, the one who went into the conclave Pope and left a Cardinal. Now, the media seems to be hyping and promoting "generic African cardinal").

And one generic African cardinal seems to be promoting himself. Not the best way of getting yourself elected.

I'm surprised Angelo Cardinal Bagnasco is not on that list. As a protege of Cardinal Siri, surely he must have celebrated the EF in the last couple decades.