THE LONG GOODBYE AND THE LONG HELLO! 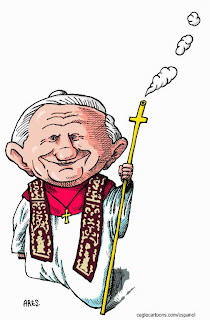 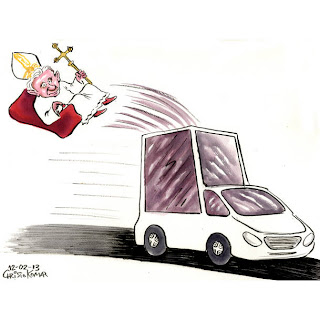 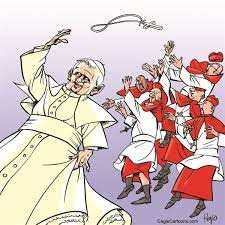 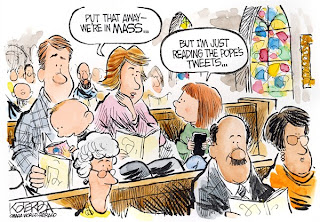 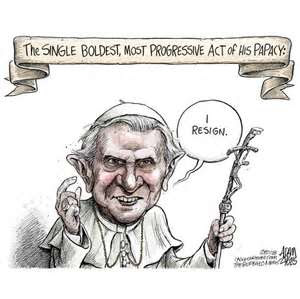 When I awoke this morning, I turned the TV on and CNN was carrying live Pope Benedict's final Angelus. It is the long goodbye, but how long and after 8:00 PM Rome time, will the world continue to say goodbye to this pope.

I will be in Rome for about three months beginning in September for my sabbatical (the first of my priesthood and after more than 33 years, but I digress)and I never thought that my next door neighbors would be a reigning pope and a pope-emeritus. I will be living on the campus of the North American College in Rome which is considered apart of the Vatican city-state and overlooks my two new neighbors. We'll be next door to each other.Yes, if I capture a picture of His Holiness Benedict XVI I will post it on my blog. I suspect he will be taking long walks in his jogging suit, so there will be plenty of photos opportunities.

But have you wondered what you would say to the new pope if he were to ask you what he should do in the shoes of the fisherman? I have, the religious geek that I am.

This means specifically the following:

1. In this Year of Faith, issue Pope Benedict's uncompleted encyclical on Faith but work with him to complete it and add to it a list of "anathemas" as it concerns the interpretation of the Second Vatican Council. In other words, call out the heresies of the last 50 years and do so strongly!

2. Continue the on-going liturgical reform initiated by His Holiness Benedict XVI. This means codifying the traditional altar arrangement, allowing every pastor to following any and all of the options in the latest Roman Missal as it concerns rubrics and the GIRM and a clear permission to any pastor to celebrate the OF ad orientem.

3. Require kneeling for Holy Communion (with the exception for standing) and that only intinction be allowed when Holy Communion is given under both forms as is already done in Rome even for clergy who concelebrate!

4. Make sure that every bishop celebrates the Extraordinary Form of the Mass on a regular basis, at least 12 times a year and that each bishop encourage every priest to do so as a sort of seminary for re-learning how to celebrate the Ordinary Form in a more beautiful and reverent way.

5. Make clear what parts of the Mass should be in Latin. I have mixed feelings on this. I think the easiest would parts of the Mass that don't change, such as the greetings, Kyrie, Gloria, Credo, Pater Noster Agnus Dei, not to mention the "amens." Others say what Pope Benedict does, such as the preface and Eucharistic prayers. Keep in mind I have always loved the English Mass and love it even more now that we have an accurate translation of the Latin which gives us our true liturgical theology and spirituality, although I will allow that the eloquence of the translation could be improved with future revisions of which I would not be opposed. But don't ever go back to the 1973 method of "equivalent translation" which eliminates much of the liturgical and spiritual theology of the Latin template.

6. Require religious orders to follow the Second Vatican Council's norms for updating their orders, meaning, they must reform in continuity with what their founders desired their orders to be and require the wearing of a visible habit in continuity with what their founder desired and allowing for maintaining even the ancient habit with slight modifications, like modern materials and summer and winter versions. Demand that religious live in community and actually observe their vows of poverty, chastity and obedience without silly re-imagining of these vows which make them meaningless and highly and fiercely individualistic. Make clear that good works are certainly a fruit of their religious life, especially serving the poorest of the poor, but make clear that poor can mean rich people who do not know the Lord nor know about Catholic Stewardship and that faith and prayer that are orthodox should be at the foundation of their religious life's expression, not just social work that anyone could do and many do. Social work is not unique to religious life or Catholicism for that matter, many do it regardless of their religious persuasion or none at all.

A couple of other suggestions for the new pope:

7 Don't simply require kneeling for Holy Communion. Revoke the indult that permits Communion in the hand altogether. It won't eliminate abuses and profanations of the Eucharist, but will greatly reduce them.

8 Continue reaching out to the Priestly Fraternity of St. Pius X and don't treat them like the enemy.

10 Restore the Oath against Modernism for all priests and bishops

11 in union with all of the world's bishops, consecrate Russia and ONLY Russia to the Immaculate Heart of Mary.

I have had similar situations in my professional life, although certainly not at the level of Pontiff. In any case, I would advise AGAINST having The Pope Emeritus so closely associated with the new Pope. There are two related reasons. First, there will be perception that the new Pope is not his own man. Secondly, this could also affect the relationship of the two men. It it only natural that a hesitation or assumption of coordination would infect the mind of the new Pontiff if he ever consults the previous Pope.

I would have a significant change in staff planned over three years. I would normally do it in 6 months, but this is the Church...

This does not mean the new Pope should never consult the man who had the job, but it should be an effort to do so. I would move Pope Benedict to Castle Gandolfo and consult him via liaison in writing. I would pay homage to him on my retreats.

I dunno, unless his "jogging suit" consists of a plain black cassock, just like in his CDF days.