A DARK FRENCH HORSE CANDIDATE FOR THE PAPACY? THE FRENCH PART OF ME LIKES THE THOUGHT OF IT

WE NEED A LYON IN THE VATICAN. 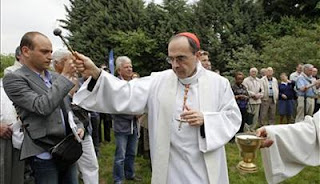 And since I am half Canadian, here is an interview for French Canadians with captions in English, and of course since the good Cardinal is in Canada giving this interview this makes him all the more a papal candidate in my half Canadian book:

As you know I have Corsican blood in my veins which makes me partially French, so I am now partial to the French. And I think we need a Lyon in the Vatican, so I think the next pope should be Cardinal Philippe Barbarin, Archbishop of Lyon (France).

What about him make him a good prospect?

On same sex marriage, he said, "This has many consequences that cannot be numbered. Afterwards, they will try to create 'couples' of three, or of four. After that, one day, perhaps, the prohibition of incest will fall. ... A marriage is a name that implies a bulwark, in order to allow the most fragile spot in society, that is, a woman who gives birth to a child, to have all conditions established so that it may take place with the best available resources.

"For us, the first page of the Bible has a little more strength and truth, that will traverse the cultures and the centuries, than the circumstantial or passing decisions of a Parliament." Of course the press with martyr him for these comments.

He is one of the 12 apostles in all of the College of Cardinals that has offered the Mass according to the 1962 Roman Missal and we all know the number 12 is quite significant in Catholic circles. But apart from offering the Mass in the Extraordinary Form he has very little patience with the neo-schismatic SSPX which may be a very good thing. This is what he has said about the SSPX: "[The Pope] wishes to offer his hand, before it is too late, to those who are afar. I feel, however, that the issue is not certain. Whenever a schism is in its beginnings, it is still possible to achieve an understanding... [sic] It is more complicated after several decades."

And then there is this: "Cardinal Barbarin [has opened] in Lyon a "bi-formalist" seminary, i.e. a seminary dedicated to both forms of the Roman Rite, which is being both taught and celebrated there. This is the first diocese in France after that of Toulon which offers this possibility to its seminarians. Cardinal Barbarin's project goes further than that of Toulon: not only do the seminarians have the opportunity to be formed according to the extraordinary form, Mass according to the usus antiquior will be celebrated every day in the seminary, open to all seminarians, including those of the ordinary form."

And the Cardinal is young! He is only 62.

Somebody get him an amice!

So we're reduced to this: that a good prospect for the papacy is someone who has publicly stated an orthodox belief in a Church teaching that all Catholics are bound to consent to anyway?

That would seem a bare minimum, an essential qualification for membership in the Church, let alone the papacy (though I will admit that in the past, some papabili, e.g. Cardinal Martini, have lacked even that).

To me, a good prospect is someone likely to take definitive action to rid the Church of the errors that Benedict has often identified, rather than simply making toothless public statements about them that has become the norm for the hierarchy in the last 40 years.

I don't know how "toothless" Cardinal Barbarin's statements are, but few seem the number of Cardinals who have the testosteronal fortitude (TF) to even SAY the right things publicly and at least he has shown that. If we want a pope who is not afraid to aggressively state his points, Ranjith is your man. He flat-out said that bishops opposing Summorum Pontificum were "instruments of the devil." Although he is a soft-spoken Cardinal, Cardinal Burke has publicly stated that un-reprentant pro-abortion politicians MUST be denied Holy Communion. If we are dealing with an end-times pope (a big "if") who would have the (TF) to deny and possibly excommunicate Joe Biden, Nancy Pelosi, Andrew Cuomo, Kathleen Sebelius and the other fake Catholics who pollute the government landscape?

The Catholic Church has its disciplines, but discipline has no effect if it is not practiced. We've looked the other way and been "soft" on the enemies of the Church for the last 40 years or so and look where it's got us. We've had a pope with the unblemished pure mind of the Church and he has done what he can. I believe we now need a warrior pope who will govern and lead the Church and expel the wolves who continue to destroy souls by confusing the message of Jesus Christ in the minds of the faithful.

Who? Who fits the bill? We must all fast and pray that God will show the Cardinals and they will have the courage and good sense to elect him.

ohmygodmybrainjustexploded: DID I JUST SEE A ROMAN COLLAR IN A CHASUBLE?!?@?!!?

I agree we need a "warrior pope" who will lead and govern the Church, and create a Catholic restoration of the Mass, of sacred art and architecture, of Catholic identity and traditions and pride. Such a pope could take the name Constantine II, a signal to both the secular world and its media, and the anti-Catholic protestants that we will no longer tolerate hate and bigoty directed at us.

As you ask, who could be this kind of pope? My guess is the best prospects would be Ranjith, Bagnasco, or Piacenza.

He has a lot of Gaul.

Ah France. Once the First Daughter of The Chruch, now a wayward child in denial. France, where attendence in SSPX Chapels fair exceeds attendence at NO Parishes nation wide. The last thing the Papacy needs is a French NO Cardinal as it's Pope, unless it's desire is to truly hasten the dissolution of the NO Church and to drive the remaining Orthodox Laity into the SSPX. Maybe a French Pope would be a silver lining after all.

Hey, Templar. Know what you call a hundred thousand men standing around with their hands in the air?
The French army.

Know why there are so many tree lined streets in France?
So invading armies can march in the shade.

Know the first item of issue to every French soldier?
A white flag.

There are a hundrd thousand French WWII rifles for sale. The ad reads,"Slightly used, only dropped once."