I saw at the New Liturgical Movement blog a post on the renovation of a Jesuit High School's chapel in Tampa. Low and behold the one who did the renovations is Joel Pidell, a former parishioner of mine from the Church of the Most Holy Trinity in Augusta, GA!

If I am not mistaken, both he and his brother were altar boys at Most Holy Trinity which had some of the best trained ones in the world due to one Mr. Bill Harper!

Joel's brother Aaron became a Jesuit priest. He is one of about 12 men who have become priests from the Church of the Most Holy Trinity between 1983 and now! I feel blessed to have been in a parish that produced so many vocations to the priesthood. It was like reform in continuity there before that became popular!

You can read Joel's blog "Reading the form" HERE.

This is the chapel before Joel got a hold of it: 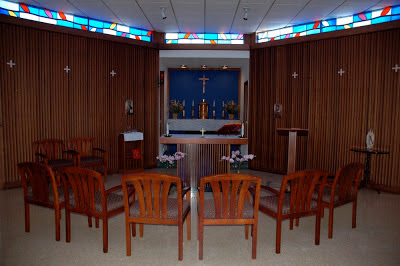 This is what he did to it!: 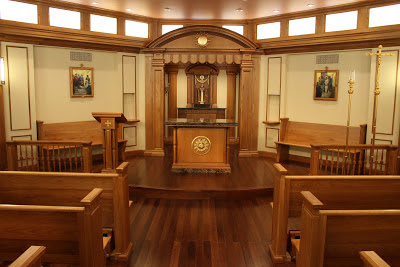 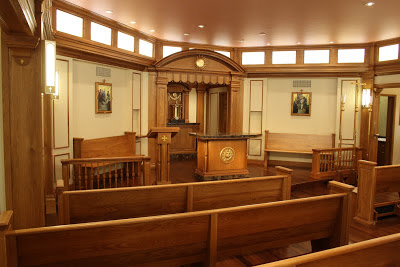 These are Joel's own words about things like this:

"Aesthetically, the task was to create a beautiful interior which was artistically coherent—properly proportioned, scaled, detailed, and ornamented—despite the eccentricities of the existing geometries and structural conditions, which was no small task with the given parameters and budget. But principally, over and above all these considerations, it was essential to transform the chapel into, as Fr. Hermes would later say, a place of “epiphany”, a space that served to manifest God’s ever-greater Glory and facilitate our encounter with the same Living God; or, as Hans Urs von Balthasar would say, an example of theological aesthetics."

Kudos to Joel, on turning a pig's ear into a silk purse!

While it is aesthetically more pleasing to the eye, I have a couple of things to ask;

1. Why make the ambo and altar equal?

2. Why have stubby altar rails which serve no purpose?

3. Why is there no step to raise the altar, save the one step which would serve as a kneeling platform for Holy Communion, if the rails were properly extended?

4. Why is there no sedelia to separate the sacred ministers from the extraordinary ministers?

5. Why are there no candles or crucifix on the altar? But they are off to the side in another part of the sanctuary?

I hate to say it, but I am not a fan. I think that it is another expression of horizontal theology trumping vertical, except that they used warm wood tones to do it.

I understand that this is a chapel, but this is a catholic worship space and inosfar as this is the case, it fits properly into the ruptured theology of the Mass. Had Joel, paid attention to traditional Catholic architecture raising the altar, extending the rails, appointing the altar, and separating the sacred ministers from the extraordinary ministers would have served this space much, much better.

He is an architect, I don't know about "grand" though....to steal a term from Mike Holmes, MAKE IT RIGHT!

I don't see the altar and ambo as "equal." The altar is central, much larger than the ambo and decorated with greater ornamentation.

The altar rails do serve a purpose - ornamentation - which is entirely legitimate. They also serve to delineate the "Holy of Holies" from the rest of the space.

I suspect the altar is not raised because adding another step would make the whole thing unbalanced and, practically, too close to the ceiling.

There is no need, in this very limited space, for separation of so-called "sacred ministers" from others in the sanctaury area seating.

I don't see any altar candles, so I suspect we are seeing an incomplete picture. (There may be a candle on a pole next to the crucific, but I am not sure.) There is no need or requirement for candles or crucifix to be "on the altar."