OF COURSE THE ABDICATION OF POPE BENEDICT AND THE ELECTION OF A NEW POPE IS BRINGING OUT THE BEST AND THE WORST IN THE MEDIA AND PEOPLE IN GENERAL BUT LET US SEE THIS AS A GIFT FROM GOD, A FORM OF PENANCE FOR THE SINS OF BISHOPS, PRIESTS, DEACONS AND RELIGIOUS

These sorts of things that poke fun at the Church and try to humiliate the Church at large should be embraced as penance for the sins and crimes of bishops, priests and others in the Church who have participated in the abuse of children and teenagers or at the very least enabled it by mismanagement. But you see how the secular and religious media use these things to promote their own perversions of divinely revealed truth.

Yes, let us embrace the humiliation that the Church as brought on herself and the scrutiny of the media as a penance for the real victims in all of this. God can use this stuff to purify His holy Church and we can cooperate with Him in that by embracing it all as a Lenten penance and in preparation for the election of the new Supreme Pontiff to fill the vacated Chair of Saint Peter.

There is an uprising of various groups of people, small in number, but happily reported by the press, that Cardinal Roger Mahony should not go to the conclave to elect the next pope. I suspect the only one who could order him not to do so would be the current pope which would be interesting to say the least and could be viewed as the living pope meddling in the college of cardinals who will elect his successor. Of course, when Pope Benedict vacates the Chair of Peter, no one can tell another Cardinal who is eligible to vote that he can't.

This cartoon from the Los Angeles Times made its way into the Macon Telegraph Newspaper this morning: 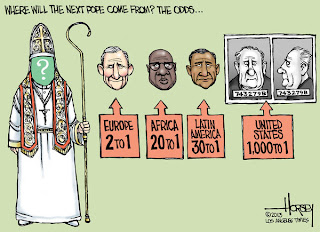 And a Macon Church of Christ has placed on their outside marquee the following message: 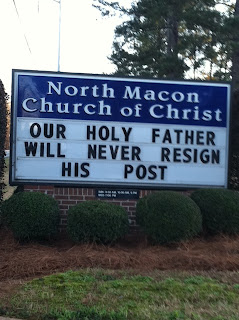 And of course, there will be the rehash of the sex abuse scandal as though it is still happening today. There will be the push for the Church to ordain women and actively homosexual people and promote same sex marriage and give a blessing to those who have abortions or want them and find a way to offer blessings to birth control pills.

It is all very silly and shows you the contempt that the "world" as St. John's Gospel would use this term has for God, the Church and all things and person holy, created in the image and likeness of God.

What is sad, really, really sad, though, is when Catholics participate in the bashing of their God and Church.

But I have to agree with Fr. Z at WDTPRS on the following, especially if we are to get past this horrific sex abuse scandal plaguing the Church and diminishing her ministry to her own and others and I quote:

"I propose to Their Eminences that it could be better to elect someone whose record on clerical sexual abuse we know a lot about.

Otherwise, in this media age, the next Pope’s pontificate could be hobbled from the starting gate.

In some countries, such as these USA, Ireland, Canada, a little bit in some European countries, the press has been crawling all over diocesan bishops for years and a great deal has been exposed to the light of day.

This has not yet occurred in the “emerging” Churches, such as in The Philippines or Brazil.

In fact, has it happened yet even in Italy?

If a cardinal from one of these places is elected, it will happen a lot faster wherever they have served.

Do any of us want to discover that the next Pope screwed up something about the abuse of kids in his diocese?

marquis: A nobleman ranking above a count and below a duke.

marquee: a canopy projecting over the entrance to a theatre, hotel, or other building.

Whatever do you mean? :)

I was wondering how the Macon Church of Christ got a French nobleman ranking above a count and below a duke to stand in fron of their church holding a sign....

Yes, it was the Marquis de la Macon's Church of Christ!

I accept the rejection of the Church by the world when it is because of what it teaches, but I have to admit that it galls me to see the Church pilloried about the sexual abuse crisis for several reasons:

1) About 1 percent of ordained priests were involved.

2) The vast majority of abuse cases were male on male, usually adolescent males, yet more evidence of a homosexual problem, not a "pedophilia" problem.

3) Homosexuals have DELIBERATELY tried to undermine the Church by infiltrating the ranks of the priesthood. Then after doing so, they've soiled the reputation of the priesthood by following their basest inclinations.

I accept this penance, but it is a bitter one, because of the hypocrisy of our accusers. The same secular media that wants to normalize all things homosexual beats the Church to death for taking positions against homosexuality and allowing the very homosexuals that the media so dearly loves to do what came naturally to them after getting through the seminaries.

As for Cardinal Mahony, no one can force him to stay home. But if he had an ounce of decency or sense of shame, he would.

Art Flemming and Chuck Wollery, all very interesting as the old Nazi on Laugh-in would say with a cigarette in his mouth, but Art what you say is true. I don't know if there was an intentional infiltration of homosexual priests in the Church to turn things up side down in an intentional way, but once they starting acting out with adult looking teenagers, treating them as dumb blonds and in consensual situations, it certainly does undermine the Church. But heterosexual priests are complicit in this too. Cardinal Mahony is living on another planet and should embrace his absence from the conclave as a penance for his part in undermining the Church. Yet, this is the Church of Christ and it will survive.

Anaonymous in Archdiocese of Detroit said...

You know what would be exciting? If the new pope takes the name Constantine II. Since these days it seems like being Catholic is considered "wrong" by the world, this would signal we have a pope who will fight such bigotry and hate.

"Adult looking teenagers, treating them as dumb blondes and in consensual situation..." AMAZING
Your attitude is still part of the problem. The priest...the adult...had position and power over the victim. I don't care how they appeared. That cannot be consensual, always abusive.
Lord, have mercy on the church with attitudes, teaching attitudes like yours, after all we have been through.
The priests should have been investigated by civil authorities and maybe they'd be sharing a cell with Jerry Sandusky. That would be an opportunity for something consensual.

What is amazing is your complete misinterpetation of my comment. This is ephebophilia perpetrated by a priest who is in authority over those they abuse--this is crass immorality on the part of the abuser. So get your interpretation corrected. The consensual part of my comment did not refer to teenagers, but adults that priests are immoral with.
I would caution though, against culturally definitions of consensual as in South Carolina girls at one time could get married at the age of 14 without parental consent and 13 with it!
Ephebophilia on the part of the abuser could be heterosexual or homosexual, although our culture doesn't look upon a mature man lusting after teenager girls in the same way as priests lusting after teenage boys. I might add that in the homosexual community there is a double standard about that too.

You consistently use the caveat of adult looking teens enticting priests in your posts. It's sickening. You need to stop it. I didn't misinterpret what you wrote. My mom was recently hospitilized and visited by a priest who brought up to me the forced retirement of a priest who had involvement with a young girl...so long ago ge said...what a pity for his surgery brother priest. Sexual abuse lasts forever. It is more than sin. If not for the media, this problem would still be rampant.

I think you are intentionally misrepresenting what I wrote and this shows your ignorance of both of what I wrote and my own awareness of the travesty that sexual abuse of a minor, teenager or adult by a person of authority and doubled when it is a person of the clergy. Stop it and stop it now!

Consensual came after adult looking teenagers in your comment. There was no reference to homosexual acting out. I will not stop. The church needs checks and balances.

Good Father - No one who posts on this blog would ever - EVER - intentionally misrepresent what another poster writes . . . How could you assert such a thing?

Kavanaugh, you are one of the very worst at twisting and deliberately misinterpreting what others post on this blog. What a joke!