IT IS LIKE A FUNERAL FOR A POPE WHILE HE IS ALIVE AND POPE PIUS XIII?

Perhaps it is a form of grief or mourning, but I am finding the last days of this papacy to be the most depressing thing I've witnessed in Rome and it is surreal. Because it is still so fresh, it is like the death watch with my mother that lasted about three weeks, with ups and downs. It is a different kind of grief than if the Holy Father had actually died. Mourning a "dying" pope and giving him a Requiem prior to his death with a new kind of "May the Angels Lead You into Paradise" and a new kind of rolling "bier":

And could this be Pope Pius XIII? He looks a bit like Pius XII doesn't he? He has good qualification too! Cardinal Angelo Bagnasco, Archbishop of Genoa (Italy), 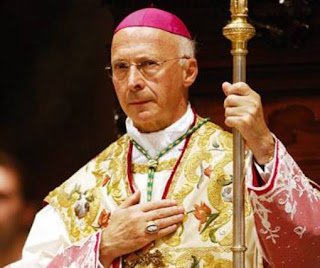 The Archbishop of Genoa has a "reputation for intellectual heft."

Bagnasco, two-time president of the Italian Bishops Conference, has a history of taking a strong stance on church doctrine.

In 2007, he was the subject of death threats after he led a campaign against proposed Italian legislation to grant some legal rights to unmarried couples, including people in same-sex relationships.

Italians form the largest voting block in the College of Cardinals, with 25 percent of the seats, and could help propel Bagnasco into the papacy.

So what kind of pope does the "world" want?

They want a pope who does not uphold "Scripture, Tradition and Natural Law." So the man they want is one who is in favor of being pro-choice and pro-artificial contraception; pro-same sex marriage, and pro-women "priests."

Will we get a pope the "world" wants? Stay tuned!

Father did you notice that ALL of the cardinals in the processional had lace albs on? We have got to get you a lace alb!!!
Donna

I am saddened but not depressed. This Pope has sacrificed his reign for us so that we can come into a new time of grace. I believe this. A younger man needs to take over the very hard times to come.

For those not aware, Bagnasco was a disciple of the late Cardinal Siri. Siri was rumored to have been elected pope in 1958, during the conclave that elected Angelo Roncalli as John XXIII. After accepting the office, and taking the name Gregory, a bloc of cardinals threatened him. He stood down and Roncalli was elected. Of course this is an unprovable rumor, but an interesting one, as Siri would have been a VERY different pope than John XXIII. He would probably never have made any agreement to be silent on Communism because he was stridently anti-Communist. He probably would never have called the Second Vatican Council. The Church likely would have been spared much of the decay and dissent it has suffered for the lasts four decades.

Bottom line: If Bagnasco would be THAT kind of pope, PLEASE LORD, LET HIM BE ELECTED.

Bagnasco is a good choice. I would also not be disappointed if Scola were chosen, he is the hand picked disciple of Papa Ratzinger.

Art - What useful purpose is served by repeating completely baseless rumors about a papal election? And is there some "agreement" to be soft on Communism that you can support with facts?

I was thinking the same...Bagnasco for the next Holy Father..I will miss Benedict XVI deeply but I think the continuity that is most desired could be best accomplished with the election of Cardinal Bagnasco...And his connection to Siri brings us back to better times in the Church. This Cardinal is a good choice...

Whatever, we are to play the hand we are dealt. I expect people in a later age will not view BXVI's changes to be as radical as we do now: he has explained and interpreted Vatican II and allowed Latin Mass under the '62 Missal. If that is, indeed a legitimate interpretation, and I have not heard anyone challenge it factually, then all he did was allow a different Form as legitimate.

I would not be surprised that a significant number of Cardinals wanted to be soft on Communism in the 1950's because I think the Church viewed, and some extent, still does, Communism as better representation of Social Justice. It is only in its mandatory Godlessness do we find a disconnect from Church Social Teachings. But that ran its course and JPII put that aside. Even BXVI has had criticisms of Capitalism that seemed to take the Socialist, if not the Communist, criticisms as his basis.

I hope for a liturgically very conservative and an economically and politically very liberal pope. That should allow for a solid central standard and a broad playing field for people to express their love of God through their lives.

Catholic social teaching is critical of both socialism and laissez-faire capitalism (see Rerum Novarum). It is ironic that the opening of the Council coincided with the Cuban missile crisis which raised the real possibility that there might not be much of a world left for the Church to relate to. The decree on religious liberty seems to be aimed at least in part at the Soviet bloc, but overt criticism of Communist regimes would appear to have been off limits.

Sorry to respond so late but I've been out all day. The agreement I am referring to is the Metz Agreement. I brought up the papal election rumor, making sure to point out that it is a rumor, because if it is true, it speaks well for Cardinal Bagnasco, not to mention that it explains the failures of the post-conciliar Church.