BOMBSHELL, BREAKING NEWS! AND BOMBSHELL ASH WEDNESDAY HOMILY! POPE BENEDICT XVI IS A MASON! HE IS A MASTER BRICK LAYER, BRICK BY BRICK!

POPE BENEDICT'S "NOT-SO-VEILED" PROPHETIC WORDS TO THE CARDINAL-ELECTORS AT HIS FINAL PUBLIC MASS ON ASH WEDNESDAY. IN THIS LIGHT, THE ENTIRE HOMILY IS A BOMBSHELL THAT DOES NOT EXPLODE THE HOLY FATHER'S MASONRY BUT SHORES IT UP IN THE LAST DAYS OF HIS PAPACY! 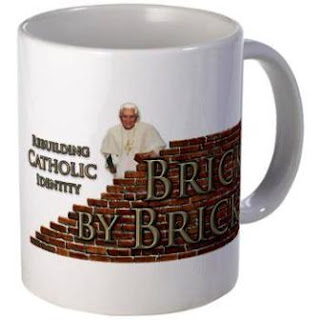 The homily the Holy Father gave for Ash Wednesday was a world-wide, eye-opening message to the Church and the cardinal-electors for the next Successor of Saint Peter. If you thought this pope would not still to try to influence the future of the Church while he is still the Successor of Saint Peter, think again. Will he do so, even implicitly, after he is no longer the Successor of St. Peter? You can bet your life on it. A Pope Emeritus who may well be a living saint, still living in the Vatican? Hello!

At any rate, I will highlight in bold what I think are direct words not only to the Catholic faithful and the "world" as St. John's Gospel uses the word, but more importantly to the cardinal-electors who certainly are being influenced even now by the living pope and later by the pope-emeritus! Yes, Pope Benedict is a mason, but not in the anti-Catholic usage of the word!

The Holy Father's last public homily at Mass as pope, from Ash Wednesday:

Today, Ash Wednesday, we begin a new Lenten journey, a journey that extends over forty days and leads us towards the joy of Easter, to victory of Life over death. Following the ancient Roman tradition of Lenten stations, we are gathered for the celebration of the Holy Eucharist. The tradition says that the first statio took place in the Basilica of Saint Sabina on the Aventine Hill. Circumstances suggested we gather in St. Peter's Basilica. Tonight there are many of us gathered around the tomb of the Apostle Peter, to also ask him to pray for the path of the Church going forward at this particular moment in time, to renew our faith in the Supreme Pastor, Christ the Lord. For me it is also a good opportunity to thank everyone, especially the faithful of the Diocese of Rome, as I prepare to conclude the Petrine ministry, and I ask you for a special remembrance in your prayer.

The readings that have just been proclaimed offer us ideas which, by the grace of God, we are called to transform into a concrete attitude and behaviour during Lent. First of all the Church proposes the powerful appeal which the prophet Joel addresses to the people of Israel, "Thus says the Lord, return to me with all your heart, with fasting, with weeping, and with mourning" (2.12). Please note the phrase "with all your heart," which means from the very core of our thoughts and feelings, from the roots of our decisions, choices and actions, with a gesture of total and radical freedom. But is this return to God possible? Yes, because there is a force that does not reside in our hearts, but that emanates from the heart of God and the power of His mercy. The prophet says: "return to the Lord, your God, for he is gracious and merciful, slow to anger, abounding in steadfast love, and relenting in punishment" (v. 13). It is possible to return to the Lord, it is a 'grace', because it is the work of God and the fruit of faith that we entrust to His mercy. But this return to God becomes a reality in our lives only when the grace of God penetrates and moves our innermost core, gifting us the power that "rends the heart". Once again the prophet proclaims these words from God: "Rend your hearts and not your garments" (v. 13). Today, in fact, many are ready to "rend their garments" over scandals and injustices – which are of course caused by others - but few seem willing to act according to their own "heart", their own conscience and their own intentions, by allowing the Lord transform, renew and convert them.

This "return to me with all your heart," then, is a reminder that not only involves the individual but the entire community. Again we heard in the first reading: "Blow the horn in Zion! Proclaim a fast, call an assembly! Gather the people, sanctify the congregation; Assemble the elderly; gather the children, even infants nursing at the breast; Let the bridegroom leave his room, and the bride her bridal tent (vv.15-16). The community dimension is an essential element in faith and Christian life. Christ came "to gather the children of God who are scattered into one" (Jn 11:52). The "we" of the Church is the community in which Jesus brings us together (cf. Jn 12:32), faith is necessarily ecclesial. And it is important to remember and to live this during Lent: each person must be aware that the penitential journey cannot be faced alone, but together with many brothers and sisters in the Church.


MY COMMENT AND THIS IS THE BOMBSHELL TO THE CARDINAL-ELECTORS!:Finally, the prophet focuses on the prayers of priests, who, with tears in their eyes, turn to God, saying: " Between the porch and the altar let the priests weep, let the ministers of the LORD weep and say: “Spare your people, Lord! Do not let your heritage become a disgrace, a byword among the nations! Why should they say among the peoples, ‘Where is their God?’"(V.17). This prayer leads us to reflect on the importance of witnessing to faith and Christian life, for each of us and our community, so that we can reveal the face of the Church and how this face is, at times, disfigured. I am thinking in particular of the sins against the unity of the Church, of the divisions in the body of the Church. Living Lent in a more intense and evident ecclesial communion, overcoming individualism and rivalry is a humble and precious sign for those who have distanced themselves from the faith or who are indifferent.

"Well, now is the favourable time, this is the day of salvation" (2 Cor 6:2). The words of the Apostle Paul to the Christians of Corinth resonate for us with an urgency that does not permit absences or inertia. The term "now" is repeated and can not be missed, it is offered to us as a unique opportunity. And the Apostle's gaze focuses on sharing with which Christ chose to characterize his life, taking on everything human to the point of taking on all of man’s sins. The words of St. Paul are very strong: "God made him sin for our sake." Jesus, the innocent, the Holy One, "He who knew no sin" (2 Cor 5:21), bears the burden of sin sharing the outcome of death, and death of the Cross with humanity. The reconciliation we are offered came at a very high price, that of the Cross raised on Golgotha, on which the Son of God made man was hung. In this, in God’s immersion in human suffering and the abyss of evil, is the root of our justification. The "return to God with all your heart" in our Lenten journey passes through the Cross, in following Christ on the road to Calvary, to the total gift of self. It is a journey on which each and every day we learn to leave behind our selfishness and our being closed in on ourselves, to make room for God who opens and transforms our hearts. And as St. Paul reminds us, the proclamation of the Cross resonates within us thanks to the preaching of the Word, of which the Apostle himself is an ambassador. It is a call to us so that this Lenten journey be characterized by a more careful and assiduous listening to the Word of God, the light that illuminates our steps.

In the Gospel passage according of Matthew, to whom belongs to the so-called Sermon on the Mount, Jesus refers to three fundamental practices required by the Mosaic Law: almsgiving, prayer and fasting. These are also traditional indications on the Lenten journey to respond to the invitation to "return to God with all your heart."

MY COMMENTS: THE FINAL BOMBSHELL OF A HOMILY THAT IS A BOMBSHELL: But he points out that both the quality and the truth of our relationship with God is what qualifies the authenticity of every religious act. For this reason he denounces religious hypocrisy, a behaviour that seeks applause and approval. The true disciple does not serve himself or the "public", but his Lord, in simplicity and generosity: "And your Father who sees everything in secret will reward you" (Mt 6,4.6.18). Our fitness will always be more effective the less we seek our own glory and the more we are aware that the reward of the righteous is God Himself, to be united to Him, here, on a journey of faith, and at the end of life, in the peace light of coming face to face with Him forever (cf. 1 Cor 13:12).

Dear brothers and sisters, we begin our Lenten journey with trust and joy. May the invitation to conversion , to "return to God with all our heart", resonate strongly in us, accepting His grace that makes us new men and women, with the surprising news that is participating in the very life of Jesus. May none of us, therefore, be deaf to this appeal, also addressed in the austere rite, so simple and yet so beautiful, of the imposition of ashes, which we will shortly carry out. May the Virgin Mary, Mother of the Church and model of every true disciple of the Lord accompany us in this time. Amen!