IS IT TIME TO THROW IN THE TOWEL ON PREVENTING SAME SEX MARRIAGE? 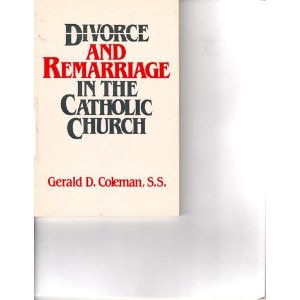 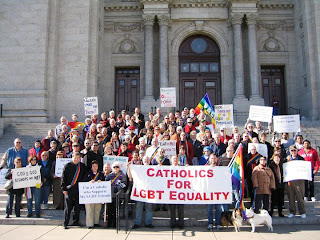 Several states have already approved same sex marriage, so the Catholic Church in those states has to deal with it. Has Armageddon occurred? Well, not yet. One day it will, but it will occur as the plan of God unfolds for the final consummation and general judgement of the world.

Since politics and the media are the new god and new magisterium of so many today, including Catholics as depicted in one of the photos above, I sense that politics and the media have formed a new generation and an old generation who simply don't give a flip about who lives together, what is done in the bedroom or out in public for that matter and who gets married and to whom. Their brains have been cooked in the microwave of political correctness and don't rock the boat, be happy, not sad. Equal rights for everyone!

And to be honest with you, when it comes to consenting adults, I don't really care to get into their minds or bodies about their attitudes and practices of sex.

Yet there is a part of me as a priest who wants to save souls who could well be destined for hell by their breaking of divine law and if one is living in sin and public sin at that, shouldn't the Church care about that and invite them to repentance and conversion? So you see my conundrum.

But what about Catholics who were married in the Church, divorced (and keep in mind in many places the Church fought tooth and nail to outlaw or limit divorce in civil law) do we obsess on their second marriages not recognized by the Church?

In the modern world and modern Catholicism, we can only invite people to drink of the truth and live by it. In other words, you can only lead a horse to water but you can't make him drink it.

As the Church, though, we are a parallel society within the larger secular society and we do have our own laws, both divine and human. Some of our laws have prohibitions and penalties, such as interdicts and excommunications. Perhaps these need to be more emphasized in our modern day and that the society that is the Church is first and the society that is secular is second.

So, as I have proposed before, I think the Church should disavow the requirement we currently have in this country and many other countries that the Church cooperate with the state in regulating marriage. Rather, what I would propose is that the Church separate itself from the state but only to a certain extent, when it comes to marriage.

The Church should define Holy Matrimony as a Catholic Sacrament requiring a Church sanctioned "minister" bishop, priest or deacon to perform the rites necessary for a Church sanctioned "bond" or "sacrament" of holy matrimony. From an ecumenical point of view, we should only accept marriages as sacramental in those Churches or denominations that believe what the Catholic Church teaches to be true of marriage. Today, I know of no other Christian denomination that teaches what we teach about marriage being a sacrament except possibly for the Orthodox Churches but even there we have to contend with their pastoral privilege of allowing for a second union after a divorce. This would also help to cut down on the number of formal annulment cases we must make non-Catholics undergo who desire to become Catholic and are in a second marriage.

The only requirement the Church should demand to keep the Sacrament or "bond" of Holy Matrimony a part of what civil law protects is that the Catholic couple go to the court house some days prior to their Church wedding to have the civil aspects of their union recognized by the state for the benefits of the state and wider recognition of their civil status in law.

What this does is that it eliminates the need for the bishop, priest or deacon to have to sign a "civil marriage certificate" as an agent of the state in terms of the civil requirements of a so-called marital union.

Sanctions, interdicts or even excommunications are placed against them for public infractions of divine and Church law.

This is what canon law is (and which I copy from the Catholic Exchange by Cathy Caridi) and Catholic, clergy and laity are required to follow it:

The code states that Catholics are not to be allowed to receive Holy Communion if they are under the penalty of excommunication or interdict, or obstinately persist in manifest grave sin (c. 915). Canon 916 notes that as a rule, anyone who is conscious of grave sin may not celebrate Mass (in the case of a priest) or receive the Eucharist without previously having been to sacramental confession. This is entirely in keeping with the Catechism’s teaching that “anyone conscious of a grave sin must receive the sacrament of Reconciliation before coming to Communion” (1385).

It is important to note that at issue here is not only a Catholic’s own personal, internal spiritual state, which might very well be known to him alone; but also his external, visible status in the Church, that may be known by other members of the faithful as well. The Church is therefore concerned simultaneously with three different, although interrelated issues: (a) an individual Catholic’s personal spiritual well being; (b) the need to maintain reverence toward the Most Holy Eucharist; and (c) the need to avoid public scandal.

Canon 915, already cited above, notes that a Catholic cannot receive the Eucharist if he persists in manifest grave sin. The point is, if the Catholic faithful see that a priest gives the Eucharist to someone whom they know is living in a gravely sinful manner, they might naturally—and wrongly—conclude that such a sinful lifestyle must be morally acceptable. In such a situation, the need to avoid public scandal is crucial!

My final comments: There is one caveat for divorced and remarried Catholics who have not gotten an annulment or an annulment is not possible. They may receive Holy Communion if they remain in the same household but live as "brother and sister" meaning they don't have sex (which is quite common for some married couples).

This could easily be applied to same sex couples who forgo illicit and/or unnatural sexual practices, those forbidden by the bible and natural law. In other words, they live loving relationships of support and mutuality but do not share their bodies with each other. Then in these situations, they could receive Holy Communion if everything else in their Catholic life is kosher.

This is what the next Pope will have to deal with:
http://www.thecollegefix.com/post/12730

Since mortal sin requires subjective awareness of the gravity of the matter (see 1385, which you quote), if we quit teaching that some matter is grave, then everyone can plead ignorance and we all thus go to heaven. I've heard more than one priest state that more Catholics are doubtless going to heaven now than ever before, because they are able to truthfully state at their personal judgments that they didn't know that they were engaging in objectively grave evil because nobody had taught them.

Thus, the modernist solution to the problem of sin, judgment, and damnation is to quit teaching anything. Soon an attempt to resume teaching is denounced by secularists and modernists as judgmental, intolerant, and invasive of privacy.

Case in point is your example about divorced/"remarried" Catholics. Do priests really try to police this anymore? Of course this gets into the "priest as policeman" problem that we have discussed before. I see several possible avenues.

1) Priest is aware of a parishoner's second putative marriage. He can a) avoid confrontation by believing/hoping that the parishoner is not aware that this is grave matter, and so will be saved by his ignorance. Or priest b) can assume parishoner _does_ know it's grave matter and thus deny the parishoner Communion in order to prevent the parishoner's heaping more damnation upon himself. Or priest may c) inform parishoner that he is in a state of grave sin in the hopes that parishoner will regularize his marriage and/or stay away from Communion. But if parishoner doesn't do that, then priest has painted himself into a corner; he now must either deny Communion or ignore canonical requirements. Or priest can d) hope there's more to the story than he knows (e.g., brother/sister lifestyle).

My guess is that most priests these days likely go with choice a), since they (like all of us) have been conditioned by modern notions of privacy and consenting adults, and because it causes the least unpleasantness (and nobody likes unpleasantness), and because divorce is pandemic. But is it the right thing to do? Might priests typically be treating parishoners in same-sex "marriages" this same way in 20 years' time?

Anon 5, I think your second paragraph needs tweaking. Modernists do not believe in either sin, judgement, or damnation and have always taught them tongue-in-cheek, anyway.

I was not aware that the idea of recognizing a marriage between two baptized Christians is a changeable discipline. Certainly I agree with you about the conundrum of dealing with what other Christian denominations teach or don't teach about marriage—do you think this could simply be dealt with as a procedural recognition that non-Catholic creeds as a matter of practice or principle deny the indissolubility of marriage?