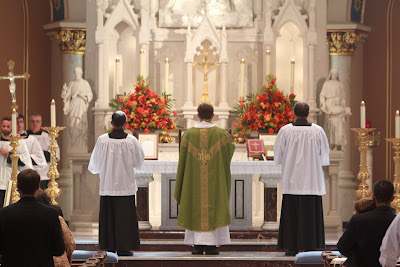 The Catholic Report on February 7th had a very good article on a book by Father Uwe Michael Lang. You can read it here or below:

Hastening the Reform of the Reform; or, the End of Clown Masses
February 07, 2013
A new book on Latin and the liturgy stresses the importance of continuity, not contentious campaigning.
Joanna Bogle

...In recent decades, especially in the English-speaking world, the words used in the Church’s sacred liturgy have been miserably inadequate for the glory of their task. Of course, the words have fulfilled their required purpose—as a bleak, ill-decorated church is adequate for Mass and provides protection from the weather for the Holy Sacrifice. But the very nature of the Mass, and the nature of human beings created to worship God, requires something better than that.

Now Father Uwe Michael Lang has examined all of this in a readable book exploring the subject of words, language, and liturgy. The Voice of the Church at Prayer: Reflections on Liturgy and Language (Ignatius, 2012) could not have come at a more opportune time: the new Mass translation—already it does not feel so new—is in use in parishes across the English-speaking world, the “reform of the reform” is well under way, the debates and discussions over liturgy have matured and are better informed than for many years passed, and the younger generation of priests is one that seeks authenticity, reverence, and beauty in the celebration of the sacred mysteries.

This book is not a tirade about liturgy with “ooh-isn’t-this-dreadful” accounts of noisy children’s Masses with horrible music and children reading aloud tedious Bidding Prayers into crackling microphones. This is a scholarly, readable, and important book that analyzes the uses of language, exploring topics that for too long have not been adequately aired. The liturgical debate in recent years has been dominated by a shouted, “Let’s just have 1962 with no alterations of any kind!”, and those wanting a deeper discussion have too often been squeezed out or been told, “Oh, you just want clowns and guitars” or even just, “Shut up—go away!”

So we are ready for a scholarly examination of the subject that does not dismiss the Fathers of Vatican II’s call for some inclusion of the vernacular and for enabling a deep prayer in the congregation connected to the activity at the altar, and which sees the essence of the discussion as involving continuity, reverence, and a sense of awe and gratitude at what has been given to us by God.

Father Lang, who is a staff member of the Congregation for Divine Worship and the Discipline of the Sacraments, looks at the tradition and heritage of Latin and the way it was used in worship in late antiquity, and how this tradition of the “rhetoric of salvation” is crucial for all of us as it “works to achieve its threefold end of teaching the faith, giving spiritual delight, and persuading to a virtuous life” (p. 76). The tone, the sound, the style, the manner of worship are all important; the idea of how we address God and the way in which we behave in addressing him—all these are bound up with the words we use.

Father Lang is fascinating on the subject of the rhythmic sound of the ancient prayers, the way in which the words and their “beat” work together. He gives us crucial insights and information from St. Thomas Aquinas, and uses him to show the deep significance of “sacred language.” It is to St. Thomas Aquinas that we owe the understanding of the value of Latin as being intrinsically linked to the Mass because it was one of the languages used at the Crucifixion itself, on the board placed, on Pilate’s instructions, above Christ’s head on the Cross.

In looking at the use of English, Father Lang inevitably points out, in some detail, the banalities and inaccuracies of the ICEL “translations” used from the 1970s until just recently, where whole sentences of the original Latin were washed away and paraphrases used instead, with an apparently deliberate attempt to bleach out references to God’s glory and to our imploring him graciously to hear our prayers, and so on. The result was to give people a sense of living through a revolution in the way they were meant to pray, and also to rob some prayers of their actual meaning and their power of teaching and inspiring.

This book will become standard reading in seminaries. It will help to foster a greater use of Latin, and hasten the “reform of the reform”; it will be quoted and studied and used in debates and discussions and arguments. Over the next couple of decades, the 1970s-style liturgies will slither away; already the whole tone and mood of any discussion about liturgy reflects more and more the message of the then-Cardinal Ratzinger’s Spirit of the Liturgy and the fresh interest in historical accuracy and the notion of an authentic attitude toward what liturgy really is.

Father Lang emphasizes continuity and not campaigning. He understands that we start where we are and work from there: that is why his work is of such practical value. He is interesting on the subject of the Council of Trent and the vernacular. Its wording was subtle and specific, and revealed a more detailed discussion than some historians have assumed. There is a consistent line from Trent’s Decree on the Sacrifice of the Mass through to the decrees of Vatican II.

Father Lang is not, one suspects, at all an enthusiast for the use of local languages—most of the book is about Latin—but he shows how the vernacular can play its part in liturgy, properly grasped, and also the crucial need to be faithful to the reality of how the liturgy develops and why. This is, again, a book of scholarship, with a message that challenges and teaches and informs—it is not a piece of polemic. It will convince a large number of young priests to take a very different view of liturgy from the one that was dominant 40 years ago. It all chimes with the general thinking, mood, and sense of loyalty notable in the John Paul/Benedict generation.

Toward the end of the book Father Lang laments that there is currently such ignorance of Latin that many Catholics are unable to sing the Pater Noster together in Latin at great international gatherings in St. Peter’s Square. I suspect that within a decade or so, things will be different. The “reform of the reform” is under way.

The Voice of the Church at Prayer: Reflections on Liturgy and Language
by Uwe Michael Lang
Ignatius Press, San Francisco, 2012
225 pages. Paperback and e-book.
Posted by Fr. Allan J. McDonald at Saturday, February 09, 2013

I've also sent this question in to Fr. Z, but you are probably knowledgeable about this topic as well.

My fiancee and I are in the initial stages of planning our wedding and hope to seal our vows during Nuptial Mass at our cathedral not this summer but the following summer. She and I both would like Holy Mass and the Marriage rite to be celebrated in a solemn, beautiful, and traditional way. My fiancee and I have an attachment to the Anglican Use, but since we are Cradle Catholics and not eligible to be part of the Ordinariate of the Chair of St. Peter, we cannot appropriately use the Rite of Holy Matrimony according to the Book of Divine Worship.

Nonetheless we wish to have our wedding celebrated in such a way that is reverent, beautiful, in line with Tradition, but also within the current rubrics in obedience to the Magisterium--essentially, "Reform of the Reform". With that said, would it be permissible for us to have an Ordinary Form "Sung/Solemn High Mass" ad orientem? Also would it be possible to insert a traditional Admonition at the beginning, before liturgy actually begins, in lieu of the current OF "Welcoming Rite"? And do you know any plans to revise the 1969 Rite of Marriage to better conform with the 3rd Edition of the Roman Missal?

Thank you so much for your ministry and I hope you can shed light on this topic.

I think you have two choices. You are correct that you would not be allowed the Anglican Use Rite, unless you get an Anglican Use priest to do it and the rector and bishop approve of such an arrangement.

So the first choice is to have an EF Nuptial Mass. The Rite of Marriage is a prelude to it. So technically you are married by the time the Prayers at the Foot of the Altar take place. I have celebrated about four of these so far and they are very beautiful. As for the marriage part, a goodly amount of that can be said in English, such as the vows/promises, etc.

If the priest who is doing the wedding is amenable, you certainly can have an ad orientem Ordinary Form Mass, but you must follow the rubrics of the Nuptial Mass, which as the vows after the homily.

I don't think you can mix and match. The traditional admonition in this case could be read at the beginning of Mass after the greeting as there is no Penitential Act in the revised Roman Missal for the Nuptial Mass, but the Gloria is now mandated whereas before it was not. So you could have the admonition and then right into the Gloria. Or the Admonition could be read at the homily time.

I hope this helps.

Thank you for you insight, Father. We'll definitely keep the EF Nuptial Mass in mind, but much of our family and friends are not familiar with it and it may become a point of contention we wish to avoid out of charity. My fiancee and I both believe in doing our part in reclaiming our Roman Catholic patrimony and so are committed to setting our wedding as an example of the beauty of the "Reform of the Reform". Thus, celebrating the Ordinary Form in an extraordinary way, as you have modeled in your own parish, is how we believe we can build a bridge between current realities and the wealth of Tradition in a manner that is inviting to our loved ones and friends who hold differing views on our Catholic identity and expressions.

The rector of our cathedral celebrates the EF regularly and may be open to celebrating an OF Nuptial Mass ad orientem. Nonetheless, we will surely check with him and our bishop if needed. Please keep us in your prayers, Father--both for the immediate needs we have in this process, and for the joys and rigors of married life we shall face together. Pray that we remain charitable in the planning process and that we approach the possibility of using our wedding as a model of faith and patrimony to our loved ones with humility.

You shall be in our prayers, too, Father. Thank you for being a model for us in your ministry.