OH, THE NOSTALGIA OF IT ALL!

I've been borrowing from posts from the New Liturgical Movement these past two days. They love to post before and after pictures of recent church renovations which I love looking at too!

The one they just posted really caught my eye in that the "before" look is almost identical to the parish church I grew up in Augusta, Georgia. It is called Saint Joseph Church too. It had the same beams and roof line and almost the same sanctuary as the before picture, except in Augusta the wood was painted, the arches were a maroon reddish color and the ceiling itself, wood planks like in the photo below was painted white. It is about the same size as Augusta's church too (which is now their social hall, as they built a new ultra modern one.

It is also very similar to the parish church of my first assignment in Albany, Georgia, St. Teresa of Avila. 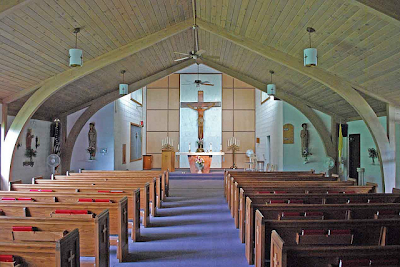 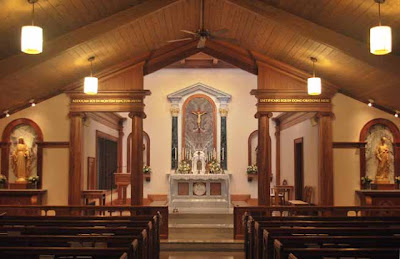 MY COMMENTS: I have mixed feelings. Certainly the after picture is a great enhancement but it doesn't seem to go with the simple A frame style of architecture. These kinds of churches were built in the 1950's and even in pre-Vatican II times, these buildings would not have been gussied up as much as the after picture is. It seems to have two different styles of art clashing, an A frame building wanting to be Baroque or something other than what it is.

Apart from that the "rood screen" effect blocks the altar from the some sitting in the congregation and seems superfluous and to fussy in this particular style of A frame building.

As I look closer at the before picture, even the statuary is exactly as what Augusta had (and it was build and dedicated around 1957 or 58 and it appears the stations of the cross are too. These kinds of churches were very simple, and cheap to build and very warm and intimate, in fact the before picture creates a very warm, nostalgic feeling for a simpler time and day with family worshiping in that building. I always felts close to God there and safe.

I've seen rather traditional (and old) Anglican buildings with an A-frame structure that resemble the "after" picture. I thus don't perceive a clash at all. One that comes to mind is Christ Episcopal Church on St. Simons.

I think that this work is of much greater importance than that of the chapel in the previous post.

It seems that this is a prime example of architecture which condones the "reform of the reform."

I think the architect did well, but he apparently could not restrain himself, so gratuitously added the columns. Without them, no detail would be obscured, and the effect would be of a larger sanctuary.

Yes, I find those pillars way to much for this humble building and ostentatious and yes they block the view of the altar and ambo and it is so very unnecessary to do in this kind of church building.

The style in the after picture reminds me of a late British colonial style I have seen in tropical and southern hemisphere countries. The 'extra' pillars would have made up for weaker materials or workmanship. Looks good to me.

Maybe maybe not on the pillars but this is the sort of thing we will likely be seeing for the foreseeable future until the outright replacement of these buildings by more suitable architectural styles (such as Grovetown above) comes to pass.

I expect to live out my life in the early 1980's A-frame church building that we currently have in Waycross, GA. I hope that does not mean that I must resign myself to continue to live with the current sanctuary--I hope for a renovation in the next decade or two that is in the same "spirit" and style as what is depicted here (probably without the columns but definitely with a Communion rail, removal of the up-front choir to the loft, and a better altar that is more suited to ad orientem). The financial factors that keep us in a less than desirable building should not hinder renovations that foster the "reform of the reform" and the new liturgical movement. While we may not be able to afford new buildings from a financial standpoint, from a spiritual standpoint we certainly can ill afford to further delay re-enchantment of the liturgy (which oftentimes requires these renovations).

I think the architect's heart was in the right place (nice altar, for example, and just getting rid of that awful carpet is already a big improvement, not just in looks but probably acoustics, too). But the columns do throw the balance off by making the sanctuary area too... "blocky," and not just blocked off.

The sanctuary within the a-frame would perhaps be better served with just the altar and reredos, or even a small baldacchin that sets everything off from the wall just a little, instead of trying to enclose the entire sanctuary in a baldacchin-like structure.

Joseph, we are in the same boat. My "home parish" is a 1960s A-frame. However, we still have the ability to fix the sanctuary, assuming that the priests who come in are willing to restore the church. It won't take too much work, just a few things moved around. As it is, those priests are still young and the parish is a "senior pastorate" in the diocese. So, sadly, I will continue to avoid the parish for the next 10-20 years or so, until such time as those young priests become "senior pastors." It is a hassle driving an hour and a half through 7 towns in order to get to a TLM, but these times call for these measures. And it is all for the greater glory of God!