JUST HOW MANIPULATIVE IS THE WORLD AND SHOULD WE BE CONCERNED? THE VATICAN KNOWS AND IS! 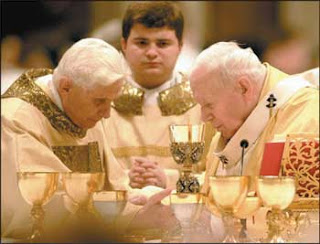 And how much do we need to know? Or is ignorance bliss?

FROM THE CARDINAL SECRETARY OF STATE THIS MORNING!

The freedom of the College of Cardinals, which alone, under the law, is responsible for the election of the Roman Pontiff, has always been strongly defended by the Holy See, as a guarantee of a choice based on evaluations solely for the good of the Church.

Over the centuries, the Cardinals have faced multiple forms of pressure exerted on the individual voters and the same College, with the aim of conditioning decisions, to bend them to a political or worldly logic.

If in the past it was the so-called superpowers, namely States, who sought to condition the election of the Pope in their favour, today there is an attempt to apply the weight of public opinion, often on the basis of assessments that fail to capture the spiritual aspect of this moment in the life of the Church.

It is regrettable that, as we draw near to the beginning of the Conclave, when Cardinal electors shall be bound in conscience and before God to freely express their choice, news reports abound which are often unverified or not verifiable, or even false, even subsequent damage people and institutions.

It is in moments such as these that Catholics are called to focus on what is essential: to pray for Pope Benedict, to pray that the Holy Spirit enlighten the College of Cardinals, to pray for the future Pope, trusting that the fate of the barque of St. Peter is in the hands of God.

"...news reports abound which are often unverified or unverifiable, or completely false..." --Communique this morning from the Vatican's Secretariat of State, released at the Vatican Press Office

The Vatican Speaks Out

Evidently concerned that the upcoming papal conclave to elect a successor to Pope Benedict XVI (the conclave is now expected to be held between March 10 and 15, though the date is not yet fixed) may be subjected to undue "pressure" from outside the Church, this morning, the Vatican Secretariat of State released the communique printed below.

The hope expressed is that the cardinals entering the Conclave be completely free to make their choice of the next Pope.

The desire expressed is for the complete freedom of the Church, libertas ecclesiae, from information, and from disinformation.

The fact that this Communique was thought necessary shows how seriously the Vatican is taking the current situation in the media, with rumors of all types swirling and spreading across the globe in mere seconds.

Clearly, the Secretariat of State is concerned about the danger that an individual cardinal, or the Conclave as a whole, may be unduly influenced by overwhelming "pressure" from outside the Church.

At the same time, there is a growing feeling among the Catholic faithful that the best way to ensure that such undue pressure is not exerted, that the "freedom of the Church" is protected, is for more of the truth about the "Vatileaks" affair, and the results of the investigation of the three cardinals into that affair, to come out.

As one reader (but there were dozens like him who have written to me) put it in an email this morning: "All the people and the faithful want, is the truth. If this continues to blow up as it would appear, then the Vatican should release the report. The people of God deserve the truth and nothing less, despite what may offend or injure the Church’s reputation. This has similar tones of cover up like what happened with the sexual abuse world wide. Let the cleansing begin."
Posted by Fr. Allan J. McDonald at Saturday, February 23, 2013

I tried to post on this before, but somehow my comments got lost. I would agree that the Catholic faithful deserve to know the contents of the report, but then again we deserve to know a lot of things that have been held back from us by the Vatican. Would the information be damaging to the Church? Only if the secular media was in charge of the Church. But opening the windows and letting in the light can only help expedite the housecleaning the Vatican needs so badly.

Pope Benedict has made it no secret that he has enemies in his ranks. As long as this information remains hidden undue forces CAN manipulate the leadership of our Church by blackmail and other means.

These rumors have been around for years. In 1999, a book was published called "Gone With the Wind in the Vatican." It was a lurid affair with tales of homosexual factions, manipulations and other horrors none of us want to believe. The authors were anonymous and we will probably never know what was true and what was not, but the point is, a cloud of suspicion will always hang over the Vatican until they come clean.

How much more can the Church's reputation be injured anyway? The leftists have successfully categorized all priests as "child molesters" and the only people who really believe such rot are the people who WANT to believe it because it validates their hatred of the Church.

The Church has open arms to welcome all who wish to join, but it's high time the Church stop pandering to its enemies. It's no way to win converts.

Re: "Gone With the Wind in the Vatican" "The Rev. Luigi Marinelli, a retired monsignor who ran afoul of the Vatican when he published a best-selling expose on church intrigue, died of liver and bone cancer on Monday, his nephew said. He was 73.

Monsignor Marinelli, who worked at the Vatican for 45 years, was summoned to appear before a Roman Catholic court last year after he was identified as one of the anonymous authors of ''Via Col Vento in Vaticano'' (''Gone With the Wind in the Vatican''). He declined to appear, saying he could not recant.

When the Vatican ordered him to remove the work from bookstores, the long-ignored book, published by Kaos, a leftist, anticlerical publishing house, became a best seller.

The book portrayed some high-level Vatican officials as greedy and careerist, and included anecdotes about sexual misconduct and corruption of Catholic clergymen, but no names were given, and most of the stories were decades old.

In an interview last year, Monsignor Marinelli lamented what he described as persecution by the Vatican. ''The book does not question the sanctity of Jesus Christ, the Eucharist or the Catholic Church,'' he complained. ''It just points out that the Vatican is made up of men, like me, who are flawed.''

There is a fear that discovering the clergy are not superhuman, but merely men, would damage the Church. Rather I think it is important that we know they are merely men moved to do superhuman things when they submit to the will of the Holy Spirit. A good example for us. I also think we are testing the Holy Spirit and presuming on his grace when we allow people to continue in office (not Office) who are overwhelmed in their battle with Satan. When BXVI was elected he said the Church have to get smaller to get stronger. I think maybe he did not know how right he was.

You just nailed it. And that's exactly what the secular media doesn't get when they try to handicap the conclave. They think the only thing that matters to the Cardinals is how many people are tithing Catholics as if being a missionary was not about saving souls, but just a membership drive for an ever-expanding club. We've reached the point where the Church needs Catholics who are ready to embrace the totality of their faith and live it out as a countercultural response to the modern world. When the coming persecutions begin, Catholics in Name Only (for instance, the entire staffs of the National Catholic Reporter and U.S. Catholic) will flee like rats.