MY THREE CHOICES FOR THE NEXT POPE, NOT THAT I AM CLAIRVOYANT OR ANYTHING LIKE THAT, OR MAYBE?

MY NUMBER ONE CHOICE:

He has much experience and would serve as an interim pope. It would be a delicious turn of events and put us back at square one and the traditional manner in which popes live out their office. He could take on the new name in continuity: Pope John Paul Benedict I 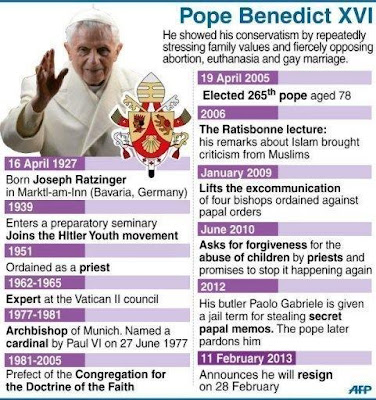 Since I am half Italian, I certainly would offer up Angelo Cardinal Scola. The photo below is enough qualification to make him a successor to Pope Benedict, the cope, the German look, the Italian heart: 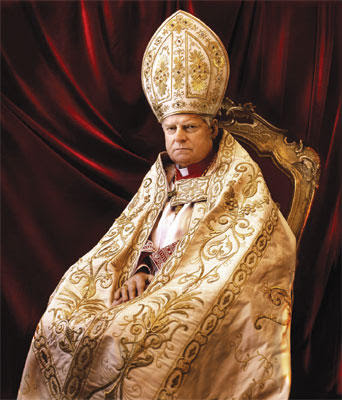 Since I am half Canadian, I would also offer up Marc Cardinal Ouellet. While a Canadian and thus appealing to the United Kingdom and America, he is also from Quebec and would appeal to the French. He is universal. He likes Roman Chasubles! 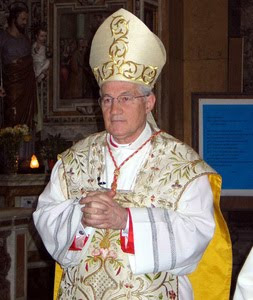 Save this abdication video, it is historic, to say the least! Watch the more muted shock of the papal MC, Msgr. Marini and the more visible shock of the bishop to his left!

That video is so typical of the secular media. They treat the papacy like a purely symbolic office and insist that the Cardinals must pander to demographics and popular trends. Their duty is to elect the most qualified candidate to lead the Universal Church, NOT to crown a "nice face" to represent the Church.

Has the Cardinals had enough of the Reform of the Reform? Is there a sizable amount of them that would go back in the other direction- with a Novus Ordo, Ad Populum Pope? I have heard of some Cardinals not being happy with Benedict's changes.

Acts of the Apostasy Blog has the inside story on the selection of the next Pope:

I watched the eyes of the bishop who in the background. I don't know if he understood what was being said, but his eyes darted from pope to cardinals to pope to cardinals. It seemed he was trying to see what the rxn might be from the red hats in the room.

PI, I noticed that, too. Sort of fun to see the response. As far as a counter-counter reformation, I think that may be part of BXVI's strategy. He can continue to write and influence in his remaining time and let the new Pope do the heavy lifting. I actually think this is a big part of his reason for doing this. He probably has one or two things he wants to finish up and wants to focus on them.

BTW, I thought there had been a few popes form Africa.

"According to the Liber Pontificalis, three popes-Pope St Victor I (ca186-198), Pope St Miltiades (311-14), and Pope St Gelasius (492-496)-were Africans. The Liber Pontificalis is composed of a series of biographical entries, which record the dates and important facts for each pope. It is the oldest and most detailed chronicle dating from the Early Church. The Liber Pontificalis is dated from the sixth century. The record of names begins with St Peter. As the work progressed the entries became longer and more detailed. The Liber Pontificalis continued to be written until 1431. The African popes in question are said to have come from the North African area that is present-day Algeria, Mauretania, Numidia, and Tunisia. Historians name this area the maghreb. Today it is mostly Muslim. The indigenous people of North Africa are Berbers"

Yep. Those. I seem to think that Victor and Miltiades were no kidding Africans, not Romans living there. FWIW, I would like to see an African get it and call himself Victor II. Victor I was the Pope who changed from Greek to Latin Mass.

OK. I'm going to give my official prediction now:

The next Pope will be Cardinal Bagnasco, who will take the name Pope Leo XIV or Pope Pius XIII