THE POPE SPEAKING OUT OF BOTH SIDES OF HIS HOLINESS MOUTH GOT HIMSELF IN TROUBLE WITH NUNS LAST YEAR WHEN ASKED ABOUT WOMEN DEACONESSES, SO HE SAID HE WOULD FORM A COMMISSION WHICH OF COURSE HE LOADED WITH PEOPLE WITH DIAMETRICALLY DIFFERING VIEWS AND GUESS WHAT THERE IS NO HISTORICAL EVIDENCE OF WOMEN DEACONS SIMILAR TO MALE DEACONS IN THE EARLY CHURCH, A FACT PREVIOUSLY UNCOVERED AT OTHER TIMES, NOTHING NEW HERE--KEEP MOVING ON!

POPE TO WOMEN RELIGIOUS: "NOT SO FAST!" 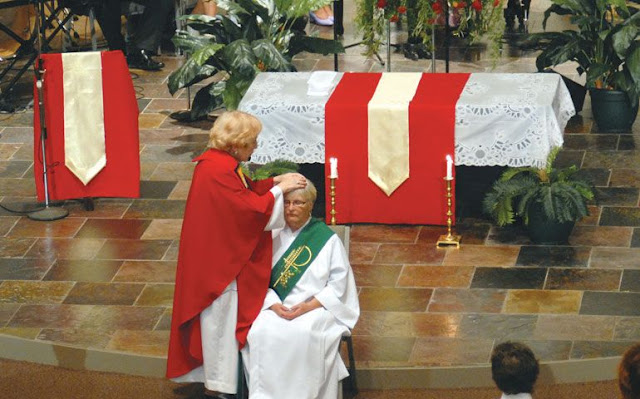 There is weeping and gnashing of teeth, similar to Hilary Clinton's defeat, with women religious and others who see the ordination of women deacons as the Trojan Horse leading to female priests.

The pope had to eat humble pie this morning as he basically told the women religious that IT AIN'T GOING TO HAPPEN, but in a somewhat politically ambiguous way

Francis: Decision on women deacons cannot be made 'without historical foundation'

"In the case of the diaconate, we have to see what was there at the beginning of revelation," said the pope. "If there was something, let it grow, let it live. If there was not something … it doesn't work."


"We cannot go beyond revelation and dogmatic expressions," he said. "We are Catholics. If someone wants to make another church, they are free to do so."

The good news is that he is building the best case possible for celibacy. Can you imagine using that explanation with your wife?

"We are Catholics. If someone wants to make another church, they are free to do so."

This is a Francis quote.

So is Francis joking about causing Our Lord pain, or is he encouraging it?