I came across this photo of a cathedral where I do not know the location. It is basically a pre-Vatican II designed cathedral. The only changes made after Vatican II is the free standing altar closer to the nave and the movie screens for what purpose I do not know.

We can get academic about the placement of the new altar with the splendor of the old altar still present. We know academically that the free standing altar is placed in a location that makes it appear that the altar, and thus the Sacrifice of the Lord and the Lord Himself are closer to the people.

But is this really the case? From the congregation’s point of view, the altar is lower than the original and thus this makes it more distant, doesn’t it?

From a visceral point of view, pre-Vatican II Catholics with a high Christology that leads to a profound sense of God as the Supreme Being and the reverence due him is lessened in the lower, simpler altar with the priest facing the congregation as some sort of teacher or conductor rather than as a priest. The altar becomes a desk. 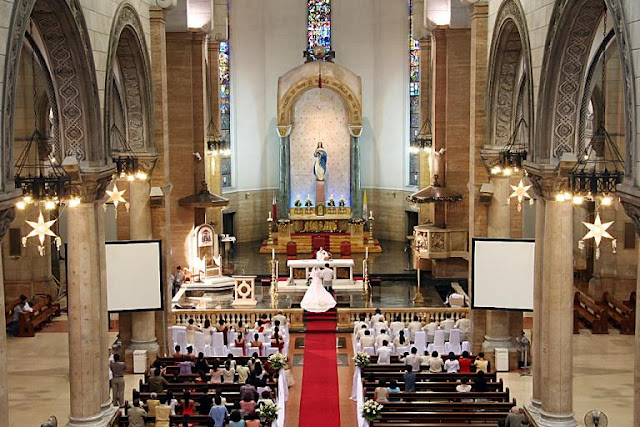 Hello Father, thank you for your blog but most especially for your sacrificial and paternal vocation. Just to help out with location - the photo you’ve posted is of the Cathedral and Minor Basilica of the Immaculate Conception in the Philippines. It’s the Primatial Cathedral of the country still in the historic walled city of Intramuros, Manila.

I’m not a fan of the little Altar in big old cathedrals. To me it seems those little altars should be moved to a secondary location (a side chapel?) within the same cathedral. That small Altar would be ideal for a daily Mass. From what I am told it isn’t uncommon for churches in Europe to have several Altars. What is the sense in having two Altars in one church competing against each other?

What seems to have happened here is that the former high altar has been turned into a Lady Altar. The trouble is that its placement inevitably makes it the centre of attention. It lacks a crucifix, so I suspect that Mass is not offered on it.

Were an EF Mass to be offered here it would presumably be at the forward altar, with candles and crucifix placed thereupon. The arrangement shown, with floor candles and the cross placed to one side is already looking dated, as is the arrangement of the sedilia. The bishop's throne is well placed, but in this arrangement is actually lower than the celebrant's chair.

It's all a mess, really. Someone has read the GIRM (an unreliable guide) and has slavishly followed some of its strictures.

As for non-Catholics: the historic English cathedrals usually have a modern nave altar versus populum, but services in the choir are at the high altar. Anglicans at least are familiar with both orientations, and have been since the 1960s.

Get rid of the "newer" altar. Restore the architectural lines of the church.