HAS THE CATHOLIC CHURCH ENTERED THE ERA OF PURITANICAL PARANOIA? IN A WORD, YES!

A priest or nun older than me needs to refresh us on the pre-Vatican II customs and laws concerning priests and laity.

I know in the seminary and I think in religious life, personal friendships, meaning one on one, were discouraged. All had to be in a group setting.

However, when sisters went out, they couldn't go alone, they needed to go in pairs.

One never looked directly at people, eyes cast down, especially in chapel and/or church.

I think too, if a priest was transporting a woman, be it a nun or laywoman, that female passengers had to be in the backseat. I'm not sure if that is folklore or true.

After Vatican II and almost immediately, all of these rules governing personal relationships and appropriate eye contact were tossed and well, you know the rest of the story.

Thus we come to this little ditty in a Catholic High School in California:

The kid with the pro-choice sign should be expelled from this Catholic High School, no? 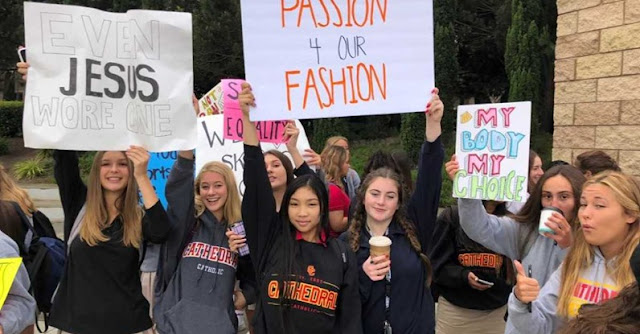 Teens usually fight against their school dress codes — but Catholic school girls in California want their old uniforms back.

Students at Cathedral Catholic High School in San Diego are protesting a new anti-skirt policy that is supposed to encourage “modesty” and prevent male teachers from feeling “uncomfortable” while addressing violations.

Kevin Calkin, the principal at Cathedral Catholic High School, sent Yahoo Lifestyle a copy of the new policy, created as a last resort for students who don’t adhere to the knee-length minimum: “…

The most significant change is that skirts will no longer be an option for girls. Dress code is a perennial challenge. The dress code exists for at least three good reasons: to foster unity, to encourage modesty, and to minimize pressure to conform to particular styles or clothing brands. Basically we hope to foster a faith-based environment where students are focused on learning and not on outward appearances.”

Calkin continued: “The main challenge with dress code has been the length of girls’ skirts. The school has made many attempts to rectify this challenge. The administration has worked with the Parent Association, has issued thousands of hours of detention, has made school-wide announcements (e.g., CCTV, orientations), and has worked with students one-on-one. None of this has had the desired effect of maintaining an overall modest skirt length in compliance with the dress code.”

I bet this was the solution to a previous argument over skirt length. The girls wanted shorter skirts than were considered modest by the teachers so they diid away with them.

Sisters were NOT go out in pairs.

The dictum - not a law but the common practice - was: "Sometimes one, never two, often three."

The changes in where people sit in cars was not a result of Vatican Two.

St. Alphonsus de Liguori wrote: “To avoid the sight of dangerous objects, the saints were accustomed to keep their eyes almost continually fixed on the earth, and to abstain even from looking at innocent objects."

Of course, if one keeps staring at the ground, one fails to see the beauty of God's creation. One might also fail to see the tree limb falling, the door being opened in one's direction, or the oncoming storm. Seems a bit extreme to me.

Well, what do you expect from California, a state which has gone off the deep end? Even Catholic schools there probably and regretfully not immune from the radical secularization of that state.

Speaking of deep end, 30327 notices a lot of those too at these pro 'Choice" rallies (although they never tell us what the "choice" is---of course than can be only two, life or death). Here in Atlanta, there was the appalling sight of Andrea Young, head of Georgia ACLU (which has never liked any abortion restriction---none) and daughter of civil rights leader Andrew Young, leading charge against the bill, even though Georgia's bill is fairly generous, allowing for rape and incest and medically futile pregnancies. They say they have the right to do what they want with their own bodies---LOL trying that in a court of law if accused of consuming illegal drugs!

No, I don't think the girl holding the sign "My body, my choice" should be expelled. I think she should be taught the truth, and learn why her statement is not Catholic thinking or practice.

Just shows who is impacting these kids' thought. And it ain't the Church.