HOW DO WE DEAL WITH A PROBLEMATIC POPE, NO MATTER WHO THAT POPE MIGHT BE: LET'S LEAVE PERSONALITIES OUT OF IT 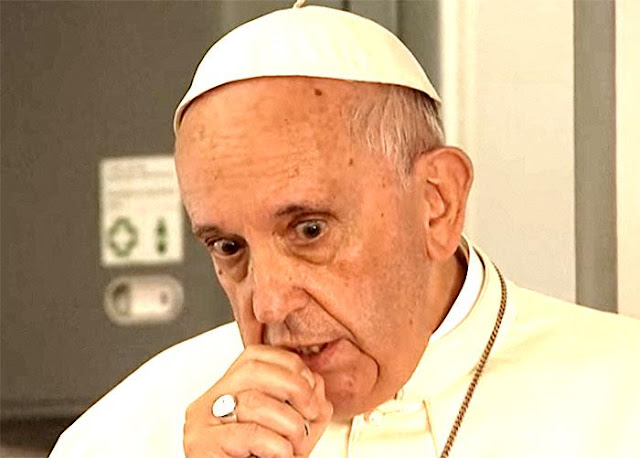 Pope Francis has been and still is a polarizing pope. He has undone the recovery of sanity and unity in the Church brought about painstakingly by St. Pope John Paul II and Pope Emeritus Benedict.

Clergyman and others in high places have questioned him on a number of topics and His Holiness' response, far from the humility so many proclaim for him, is silent as most absolute monarchs wold be.

Absolute monarchism in the Church is a very virulent form of clericalism because there are no canon laws to deal with a problematic pope.

By problematic, I don't necessarily mean a heretical pope.

It could be a pope suffering from Alzheimer.

It could be a pope suffering from a major mental illness involving schizophrenia, paranoia and other pathologies.

It could be a pope who is found after his election to be credibly accused of sexual misconduct with adults or minors.

It could be a heretical pope.

Who then makes the decision to remove a pope?

Those accusing Pope Francis of heresy are asking him to repent and if he doesn't the bishops (which bishops ?) are to tell him he ceases to be pope if he hold and teaches heretical doctrines.

We are in a mess of gran proportions because there are no clear procedures outlined for each and every Catholic to know and understand.

What to do? Maybe start with getting some advice from Benedict XVI if, of course, his abdication wasn't entirely his own doing.

Hey Anonymous.. Please let me save you the trouble... There's a typo in this post. Please note that as this isn't an official means of communication (see the blog host's disclaimer), it is not of concern to most.

My answer will probably either anger readers or trigger some scoffing, but, on a practical level, there is NOTHING we can do.

This pope is a punishment. We, collectively have asked for this kind of pope and this is what we have reaped. Our inordinate worship of one single ecumenical council and all of the uncalled for nonsense that followed in its wake have culminated in the election of an untenable pope. We must suffer.

To quote St. John Eudes: "THE MOST EVIDENT MARK of God’s anger and the most terrible castigation He can inflict upon the world are manifested when He permits His people to fall into the hands of clerics’ who are priests more in name than in deed, priests who practice the cruelty of ravening wolves rather than the charity and affection of devoted shepherds."

On another level, we must fast, pray and repent, and that includes doing penance for those who have harmed the Church.

Be careful, Father, that you don’t simply repeat the faulty logic that got us to this place. Can a child molester be a Catholic? Certainly. A *good* Catholic? Not while under the burden AND SWAY of that sin. Pope Francis, homo sum, can make any of the mistakes any other man can make. Should he be allowed the responsibility of any ordained position if he won’t correct those mistakes and support the tenets of Faith or the laws of his Church? He should have the integrity to remove himself from any office that he cannot fulfill and take a position where he can propose his ideas to the Faithful and work those changes without sedition. We are not talking about tolerating someone or loving a sinner. We are talking about someone who portrays his mode as intellectual curiosity but without self reference. That lack of introspection makes discernment at least improbable if not impossible. It may be charitable to think it is the environment of a sick mind and not an evil one but we must acknowledge our responsibility in this. You can love the alcoholic and help him in many ways but it is irresponsible to give him the keys to your car unless he is committed to being reliably sober.

Conciliarism and Gallicanism. That's the only solution, and high time too.