IT'S JUST TOO MUCH! OVER THE TOP ORDINARY FORM PASTORAL MUSIC TRIUMPHALISM 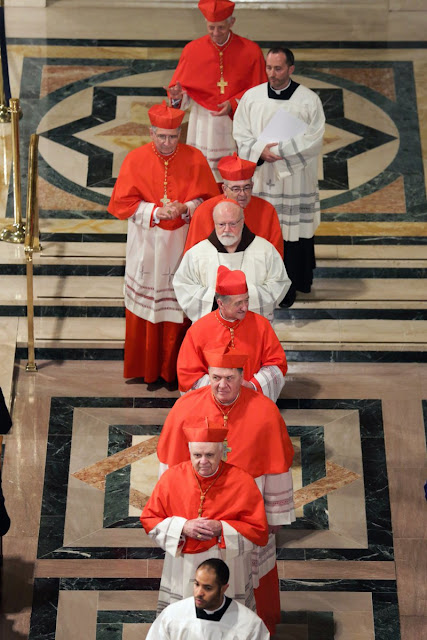 I only watched a small part of Archbishop Wilton Gregory's Installation Mass as the new Archbishop of Washington, DC.

The National Basilica of the Shrine of the Immaculate Conception is known for its liturgical music. It is a professional choir and does high brow stuff.

I had hoped the Installation Mass would have been a sober, humble experience in the Ordinary Form, but no, over the top with the music.

The Processional Hymn was with blaring organ, brass, tympani,  and other triumphal instruments. The crowd cheered the newly arrived Archbishop as he processed to the altar--what sheer and utter stupidity and nonsense given what the Church is going through!

Could you have imagined the proper Introit with polyphony or Gregorian Chant and the parts of the Mass the same. But no, that's too humble, sober and simple for such an august occasion.

The Responsorial Psalm was over the top and I simply stopped watching my stomach churning.
Posted by Fr. Allan J. McDonald at Wednesday, May 22, 2019

"...what shear and utter stupidity and nonsense..."

There's some sheer stupidity going on on this blog, too.

Same here. Ridiculous!! And what is Cardinal Wuerl still doing hanging around. He's a disgrace.

Yes, A @ 9:49, your comment is surely or should I write Shirley it. Go check your eyes and this post!

I'm glad you corrected the error.

Worse yet, Mahoney from Lost Angles was there preceding Wurel in the photo. I really think they like poking the clergy and laity in the eye! Tone deafness!

What error, or should I write arrow?

This is the error you corrected: "...what "shear" and utter stupidity and nonsense..."

As goes the Liturgy, so goes the practice of the Faith.
Holy Mass, the greatest prayer of the Church—do we really believe that? If so, whom/Whom are we worshipping?
It seems we are more concerned about spelling errors than Faith errors in this thread thus far.
—Anon 9:30

"The processional hymn was blaring with organ, brass, trampini..."

Sounds good to me---the type of instruments I hear when I play sometimes in my morning commute from 30327 in my car "Hymns of Praise" from St. Paul's (high church Episcopal) parish in Washington. And the closing hymn played to the tune "I vow to Thee my Country"...like that too. Better that than folk music. But I agree, we could do with less applause, if any at all. And certainly you were not expecting "ad orientum"?!?

I get the feeling you and the archbishop don't see eye to eye when it comes to liturgy...

When what a person does in public is noticed, it is not stalking.

When a person invites responses and then gets them, it's not stalking.

When a person's every word and sentence is examined closely for errors, and there is evidence of a compulsion causing a comment on every error - it IS stalking.

It takes very little examination - none of it close - to see "shear" when "sheer" is the correct word.

Maybe you don't see it, maybe you choose to overlook it. Maybe you will defend Fr. McDonald from any hint or error. That's up to you.

And if you knew the number of errors that are NOT commented on, you'd be, well, completely unchanged, I suspect, and not the kind of "expect" that has anything to do with mothers who are only, in the short term, no pun intended, but I digress, pregnant.

Did YOU, of all people mean "hint OF error?"

Good for you, Dan! See, now that didn't take any close examination, did it?

You know you have a serious problem in the Church when clergy are more concerned with spelling errors than doctrinal errors.

Lord Jesus Christ, Son of the Living God, have Mercy on us all. Amen

So so interesting that the topic of this thread was supposed to be: “OVER THE TOP ORDINARY FORM PASTORAL MUSIC TRIUMPHALISM", and how it immediately went sideways into spelling error.
Anon 9:49, get a grip! Dan, stop responding to it—that only encourages his compulsive, narcissistic behavior. Please.

Agree with Carole: “Lord Jesus Christ, Son of the Living God, have Mercy on us all. Amen”

Only this particular cleric Carol.

We should all be happy to find pursuits for which we are so well suited.

I don’t know what you’re talking about because the Introit was clearly sung in Latin (before the entrance hymn). If you don’t believe me then look at the service leaflet.

If you must have an entrance hymn, then the Introit should follow, not precede it.

A lot of music associated with the Novus Ordo manages to be bombastic and vacuous at the same time. No-one objects to trumpets and timpani in a Haydn Mass (even Pius X didn't object too much to 'through-composed' pieces).

They had the Pearl of Great Price but they pawned it.

I think one could easily make the argument that the Church has been almost completely infiltrated and is now pushing the new world order which has been condemned many times by the Church. Just a short time ago, Francis would not have even been able to teach at a Catholic university.

Having watched more or less the whole thing, I felt a bit embarrassed for you lot. The following points are my considered critical judgement. I hope that those who disagree with them will make their own case in a similarly considered way.

1. An occasion such as this should be both joyous and solemn. Nowadays a modicum of applause is not considered out of place. But here the congregation sounded like the crowd at a football match, and solemnity was almost totally absent. This is not the fault of the Novus Ordo per se.

2. The opening hymn, 'All Creatures our God and King' was stretched out to twenty minutes because the entrance procession was inordinately long (the clergy should have already been in their places). As a result it had to be ridiculously over-arranged.

3. The rest of the music lurched from the bombastic to the sentimental. The Gloria was an exception; it was a quite attractive chant-like setting sung alternatim between choir and congregation.

4. The Responsorial Psalm was toe-curlingly awful. Was the soprano improvising badly or did someone acually write this tripe?

5. The 'alternative' Eucharistic Prayer was a wretched example of a very dubious genre. And why did the Archbishop trot around waving the Apostolic letter of authorization at all and sundry?

Thank you for this critique John. Say what you will about Pope Francis, at St. Peter’s there is an announcement prior to papal Masses to the congregation not to applaud the pope before or after. Given the nature of hierarchical corruption today, this kind of sobriety is necessary and was lacking in Washington.

Yeah, I agree with John about the waving of the apostolic letter. As if there is any doubt he was appointed? Like someone is going to question whether the appointment was really made? In the Episcopal Church, before a bishop is ordained, the congregation is asked if there is any reason the ordination should not go forward. And I think in an Eastern Orthodox priestly ordination, the same is asked (not sure about bishops). Wonder if there would have been any objections expressed there.

But in any event, he will have his hands full. Talked to someone up there the other night who said their parish is getting a number of "non-renewals" on pledging because of the McCarrick fallout. And Gregory has a somewhat short time, 8 and a fractions years before he reaches 80 and likely steps down (assuming he becomes a cardinal, pretty likely given that city's status).

John, I agree with all your points except the first. Applause is unnecessary and distracting. There are other, more appropriate ways to honor a newly-appointed ordinary. At the very least, the crowd can cheer and clap outside the nave.

75 is the retirement age for bishops. If Wilton is made a cardinal, he can vote in a conclave until his 80th birthday.

A good example of how to combine exuberance and solemnity in the context of a Novus Ordo Mass was Benedict XVI's Mass in Westminster Cathedral in 2010. The Pope processed in to James MacMillan's 'Tu es Petrus', complete with trumpets and drums, but as he reached the sanctuary this segued into the Introit 'Dignus est Agnus'. The Mass setting was by William Byrd, and there were motets by Bruckner and Hassler. The Responsorial psalm was sung in English to a Gregorian tone but the Alleluia and Communio were from the Graduale Romanum.

The corrected translation had not yet been introduced but the effects were mitigated by the fact that Latin was used from the Preface to the Pater Noster. There were two hymns - one during the distribution of Communion and one at the end.

https://youtu.be/TCtle4z0Azc (the post-Gospel procession, which starts about 30:00, is jaw-droppingly dramatic - a priest who was concelebrating said he thought the roof was about to cave in!).

I've mentioned this before, but another example of how things might be done is St Mary's Cathedral Sydney (their Mass for Easter Sunday is on YouTube). The Archbishop (Anthony Fisher) sings (yes, sings) his parts in English but the choir (men and boys) sings Latin chant and polyphony to a very high standard.

A few weeks ago Abp Fisher, a Dominican, was in Oxford and celebrated the Sunday Solemn OF Mass at the Oratory. This time he had to sing it in Latin. Afterwards he joked that any perceived mistakes were because he was following Australian custom!

At only 59 he is one of a new generation of prelates who combine sound doctrine with liturgical sensibility.