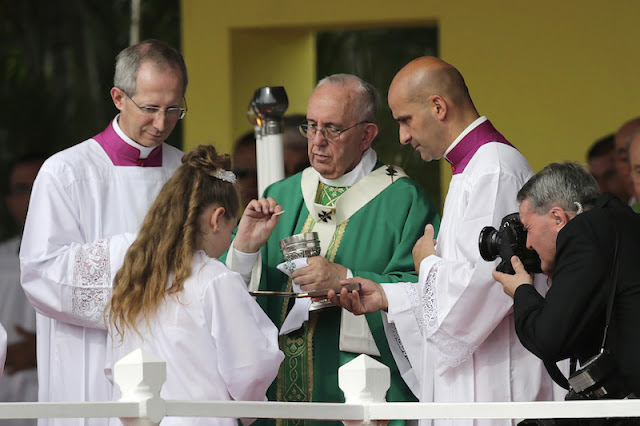 When I made my First Holy Communion on Mother’s Day in 1961, 58 years ago, the nuns who taught us were the ones who led the rehearsal. The rehearsal focused on the procession and how to approach the altar railing and return to our seats. We entered in a tight line two by two. The first two children stopped at the altar railing waiting for all the children to be in the aisle after entering the church from outside. Then sister had a clicker and clicked once for all of us to genuflect together; we went down on one knee and waited very briefly for the second click to arise. This was the major part of the rehearsal. Then we proceeded to enter our pew from the side aisle.

While we did approach the altar railing at the rehearsal, we did not receive an unconsecrated wafer. However our pastor made these available to parents to teach their children at home how to receive on the tongue, not to chew the host, but allow it to dissolve to the point where one could swallow it.

My father did not get the wafers. He used cornflakes with me which I nearly choked on!!!!

Thus the first time I ever received a “wafer” was actually the Body, Blood, Soul and Divinity of Christ at my First Holy Communion. And yes I panicked when the Host stuck to the roof of my mouth and I did have a bit of a time trying to swallow.

My parish had First Holy Communion this past Sunday. I did the rehearsal with the help of our DRE and catechists. We did not have precision at the procession. The children processed in, bowed to the altar individually and entered the pew from the side aisle.

I rehearsed our children by using unconsecrated wafers and they received by coming into the sanctuary, kneeling on a kneeler and receiving on the tongue by intinction.

We asked parents and others not to take photos. We had a professional photographer who took a photo of each child as s/he received Holy Communion and a group photo after Mass in the Church. Photos were allowed before and after Mass.

Your recollections of First Holy Communion for yourself, your children or your grandchildren????
Posted by Fr. Allan J. McDonald at Friday, May 10, 2019