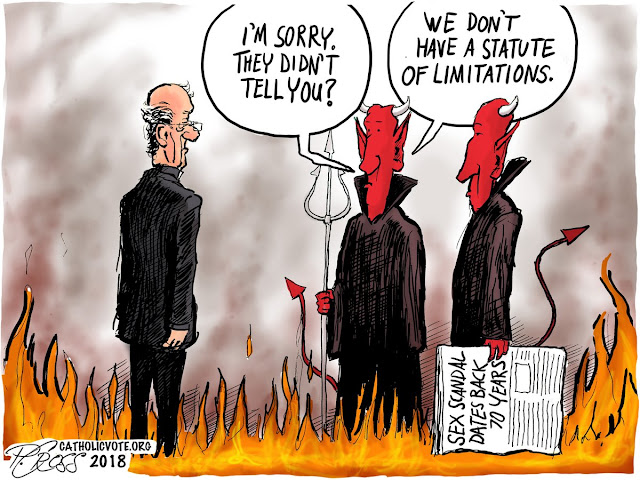 Barron urges Catholics not to quit over scandals, but stay and fight


I don' t know about you, but I am scandal saturated at this point and would like to live in denial about what has occurred in the Church for the last 50 years. Even if this scandal was present in the pre-Vatican II Church, the post Vatican II Church which has lost its way is in no position to solve this problem in any meaningful way, meaning getting to the root of the crisis which now is a virulent form of clericalism, naming the problem clericalism, oddly enough!

Bishop Robert Barron has written a book. He knows Catholics are disgusted and many have disengaged from the Church and sacramental participation. He tells them to stay and fight.

May I suggest to the laity that the fight entails a certain demand of Pope Francis:

1. Answer the Cardinal's dubia
2. Answer the questions that Archbishop Carlo Vigano raised and meet with him in a public forum to do so!
3. Stop returning us to 1970's confusion, fragmentation and iconoclasm as it regards Catholic practices and Catholic unity and Catholic doctrinal and moral clarity

That would be a great start for the laity, Bishop Barron, wouldn't it?
Posted by Fr. Allan J. McDonald at Monday, May 13, 2019

Bishop Barron needs to man up and tell the Vatican to stop admitting homosexuals to the seminaries and to suspend bishops and clergy who teach heresy. That would be a good start

No, I am not blaming all the bishops. I am simply stating that bishops are the ones with the power and that power continues to be abused and we continue to get terrible bishops appointed to important sees.

I suppose the spiritual warfare of prayer and fasting applies, but, aside from that, we are powerless. The current mediocre to bad crop of bishops is a punishment from God and we have to stay and take our punishment. My only question is, "How much longer, Oh Lord?"

If only there were a canonical way to be able to get rid of these should I use the word Bishops?