IS IT EVER MORAL TO BREAK THE LAW IN ORDER TO DO GOOD, LIKE HELPING POOR PEOPLE IN AN APARTMENT THAT HAS HAD ITS UNPAID ELECTRIC BILL DISCONNECTED FROM THE ELECTRICITY? 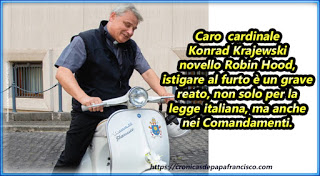 I like Cardinal Konrad Krajewski Last week His Eminence climbed into a manhole that had been secured by Italy’s utilities in order to turn on the electricity to an apartment building where numerous poor families illegally lived. For over five years, the electric bill went unpaid and now accrues to about $300,000 euros.

The good cardinal says he will take responsibility for his actions (which means he is willing to go to prison for a good action). This is the highest form of moral development achieved by only a few of us that we are willing to take responsibility for our good actions that go against the law and for the greater good. In this regard he is like Dr. Martin Luther King who willingly went to jail for a number of infractions against unjust laws.

Thus, what do you think of the good Cardinal’s moral developmental stage and should he not only be made to pay the 300,000 euro, pay a fine and go to jail for up to three years?

I report; you decide.

“This is the highest form of moral development achieved by only a few of us that we are willing to take responsibility for our good actions that go against the law and for the greater good.”

Our true model: Jesus Christ who went through arrest, physical torture, then death, for the greater good of all.

We sorely need this kind of cleric in the USA to model for us the highest road of moral development. Actions speak louder than words, as all the saints would tell you.

This is complex, involving illegal activity by the people and the cardinal. Stealing is always evil. A better path would be to work with the authorities for a comprehensive solution where the people have some responsibility for paying. Similar scenarios are playing out with homeless encampments all over the country. The solution is not to turn a blind eye. Vianney1100.

The squatters were breaking the law a) in illegally occupying a building thus depriving the legitimate owners of its use and any rental which might have accrued therefrom, and b) defrauding the electricity company to the tune of 300,000 euros, by using electricity for which they had no intention of paying.

These are not 'unjust laws' by any stretch of the imagination. They apply to all of us without exception. To compare them with the laws enforcing segregation against which MLK fought is ludicrous.

The cardinal has undoubtedly committed a criminal offence by tampering with public utilities. He may also be liable for the electricity used from the time he reconnected it to the time the authorities turn it off again. In fact, he has offered to pay for it, and left a note to this effect in the manhole. It will only cost the Vatican $5600 a month.

Where he is morally culpable is that he is aiding and abetting criminal activity, and encouraging others to break the law. However, the whole thing sounds like a publicity stunt. He is, after all the papal almoner, tasked by PF to go out and about on his scooter actively seeking out poor people on whom to bestow papal largesse.

I suspect that the 400 squatters are illegal immigrants, since poor Italian families get access to social security. PF recently shelled out a fair sum to help those trying to enter the USA via Mexico. Given his priorities, I shall not be contributing to Peter's Pence this year.

So we can expect him to break into abortion mills at night and disconnect the electricity to prevent abortions?

Well, he seems to have the technical expertise to do so, and if a portly middle-aged cardinal can squeeze into a manhole I'm sure this might make a good photo-op.

But I won't hold my breath.