IS THE REFUSAL OF THE ANGLICAN COMMUNION TO USE THE TERM PRIESTESS AND DEACONESS A SIGN OF THE DEVELOPMENT OF GENDER THEORY? 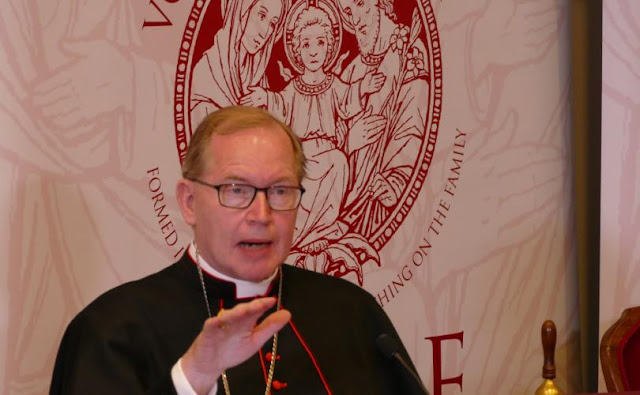 Gender theory’ is a ‘threat’ to proclamation of the Gospel: Dutch Cardinal

We've had a lively discussion by way of stealth of gender theory in the Anglican/Episcopal community where the feminine words for the masculine terms of priest and deacon are refused to be used, meaning priestess and deaconess.

This is true of those heterodox in the Catholic Church who desire female ordination, some would write, womyn ordination. They want womyn to be priests and deacons and they refuse the feminine of these words in English, priestess and deaconess.

Thus the Cardinal  hits the nail on the head in this comment from a much longer speech he gave this morning which you can read HERE.

In his opening address today (read full talk below), Cardinal Eijk said the “vision of man” put forth by gender theory, which he defined as the idea that someone can choose their own gender, is “radically” opposed to the view of the human person held by Christianity. The root of gender theory lies in the feminist movement of the 60s and 70s, he argued.

As it concerns the refusal to use the feminine terms priestess and deaconess and only priest and deacon for both male and female varieties, isn't this a product to the feminist movement of the 60's and 70's.

As one who lived through it in a very liberal seminary in the late 70's and where gender neutral terms were required  in referring to God, I can say absolutely yes.

Instead of the male pronoun for God (Him) we were required to us God. While I never heard it liturgically, femininazi nuns refused to say "Father, Son and Holy Spirit" but rather insisted upon "Creator, Redeemer and Sanctifier."   Leave it to liberals to be materialistic about God; they love Him, I mean, God, for what God does, not for who God is.

Is she an actor or an actress?

Is she a doctor or a doctress? A dentist or a dentistess? A professor or a professoress?

"Gender theory" as it relates to choosing one's gender is highly problematic. However, gender theory is not about a woman choosing to call herself an "actor" or a "doctor."

There is no such word as doctress, or dentistess, or professoress, so your argument is a silly one (like most of your arguments).

If an actress wishes to style herself as an actor (I thought feminists objected to masculine identifiers but consistency was never their strong suit) then she is within her rights to do so.

By the same token, everyone else is entitled to refer to her as an actress, since that is what she is.

What is theoretical about gender? Are back to talking about German?

Oh, John, you stumble into the truth in spite of yourself.

"There is no such word as doctress, or dentistess, or professoress, so your argument is a silly one (like most of your arguments)."

Why are there no words such as doctress, or dentistess, or professoress? Could it be because until relatively recently there were no women in these professions because they were excluded?

Women can, and do, perform in every profession as well as, or, in some cases, better than, the guys. And they do it without being masculinized.

So, if we can can call a woman doctor "doctor" there's no reason why we should not call a woman actor "actor."

Yes, let's get rid of the word actress. It would shorten the tedious Oscar awards since there would be fewer categories.

'Could it be because until relatively recently there were no women in these professions because they were excluded?'

The fact that some words have a feminine suffix (unfashionable in any case these days) while others do not, appears to be largely arbitrary.

The Anglicans had deaconesses before they had women deacons. A deaconess was not ordained. As for 'Creator, Redeemer and Sanctifier', some trendy Aussie priests used it as a formula for baptism. Such baptisms were later declared to be invalid.

Further to the above, 'doctor' simply means 'teacher'. A medical practitioner is a physician or a surgeon. 'Dentist' is simply a shortened form of 'dental surgeon'. We know that women practised medicine in the Middle Ages.

There is no feminine equivalent in Latin for 'doctor', but this does not imply that women could not teach; there is the word 'magistra', the feminine of 'magister', a master or teacher. 'Doctress' would have not made sense to the classically trained formers of the English language.

Doctor: "1. a qualified practitioner of medicine; a physician.

Anonymous is up to his usual trick of giving one definition only of a word, and ignoring the others.

St Catherine of Siena is a Doctor of the Church, but I don't think she wrote out prescriptions. Nor would I take my ailments to a Doctor of Philosophy. Most medical practitioners do not in fact have doctorates; the term 'doctor' is a courtesy title only.

John, you defined one word - doctor. In case you forgot: "Further to the above, 'doctor' simply means 'teacher'. A medical practitioner is a physician or a surgeon. 'Dentist' is simply a shortened form of 'dental surgeon'. We know that women practised medicine in the Middle Ages."

So, when you define one word, in your idiosyncratic way, that's fine.

When I do it, it becomes trickery.

I didn't define it. I simply pointed out its original and literal meaning. However the point was that there is no word 'doctrix' in Latin, so 'doctress' would have been an anomaly. 'Authoress' and 'poetess' implied that women were working in a field dominated by men, which is why they are unfashionable today; but so were women painters, yet there is no such word as 'paintress'.

However the -ess suffix also denoted occupations in which men and women were employed on more or less equal terms, such as 'shepherdess' (still used today). 'Manageress' is still used but is on the way out; however as titles no-one has challenged the following: baroness, viscountess, countess, marchioness, duchess, princess.

Your words: "Further to the above, 'doctor' simply means 'teacher'."

When you give the meaning of a word you - wait for it - define it.

Also, I suspect you might be relying a little too heavily on your own insular experience of the English language. In this part of God's creation, "doctor" means, "a qualified practitioner of medicine; a physician." to, I suspect, 95% of the people who hear and use it.

To paraphrase something I read somewhere... "English refuses to conform to neat little island-based theories."

No. To define a word properly one needs to give all its uses. The term 'doctor' is indeed used to refer to a medical practitioner; in fact that is the most common use of the word, even if the person so described is only a Bachelor of Medicine. But it is not its only connotation, and to look at the derivation and original meaning of a word is a useful exercise.

As to being insular, if that means declining to take English lessons from a redneck like you, then all well and good.

As usual, you won't (or can't) address the argument, and simply indulge in petty point-scoring.

Sorry, John, you defined the word. Now, you backtrack, with, "Oh, but I didn't do it 'properly!'"

Not as weak as your sorry attempts to have the last word. Everyone on this blog regards you as a joke. Now piss off.

Get over your supercilious self.

Anonymous, I did nothing of the sort, and the fact that you assume I did shows your lamentable deficiency in reading comprehension, as well as your inability to see anything in the context wherein it is written. You ignore arguments because you are incapable of answering them, but latch on to something which your limited intellect can cope with, and even then you get it wrong.

You are truly beyond satire. I'll terminate this fruitless exchange by giving you a puzzle which will probably occupy you for weeks.

Rearrange the following words to make a well-known phrase or saying: 'off, piss'.

John - you defined doctor. Your words: "Further to the above, 'doctor' simply means 'teacher'." (I will note that you went on to define a "medical practitioner" as a "physician or surgeon."

Then you denied defining it. Your words: "I didn't define it."

THEN, you went on to redefine your position. Your words: "To define a word properly one needs to give all its uses."

Second you denied defining the words, which you plainly did. (Yeah, you did define it.)

Third, you tried to weasel out of your definition, saying that a definition has to include "all its uses." (If, as you claim, you didn't define the word, why was it necessary for you to clarify that your definition wasn't "proper" because you hadn't given ALL the uses?)

You are clearly insane, so don't bother us any more with your tiresome discourses.