WHOA! THE HOVERBOARD PRIEST GETS SUSPENDED BY HIS BISHOP! I WONDER IF THE BISHOP READ MY BLOG POST YESTERDAY??????? 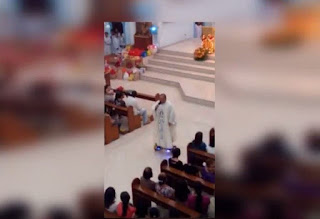 Yesterday I posted THIS about the Hover Board priest hover boarding throughout his Christmas Eve Mass. You can read it again by pressing these two sentences.

But this is the most important thing I wrote and which makes me wonder if the good bishop read my blog on this which I posted Sunday or was informed of it as I have many in the Philippines reading my most humble blog:

I copy this from Deacon Greg Kandra's blog:

You probably remember the story (you can see the video here). Now, a response from the priest’s diocese in the Philippines:

The Diocese of San Pablo on Tuesday, December 29, criticized one of its priests for using a hoverboard in a Christmas Eve Mass as seen in a video that has gone viral.

“That was wrong,” the Diocese of San Pablo, Laguna, said in a statement Tuesday.

“The Eucharist demands utmost respect and reverence. It is the Memorial of the Lord’s Sacrifice. It is the source and summit of Christian life,” the Diocese of San Pablo said.

Referring to the Mass, the diocese continued: “It is the Church’s highest form of worship. Consequently, it is not a personal celebration where one can capriciously introduce something to get the attention of the people.”

The Diocese of San Pablo said the incident happened on Thursday, December 24.

The diocese said that “before the final blessing of the Christmas Eve Mass, as a way of greeting his parishioners, the priest sang a Christmas song, while going around the nave standing on a hoverboard.”

The diocese did not identify the priest in its statement.

…The Diocese of San Pablo added, “The priest said that it was a wake up call for him; he acknowledged that his action was not right and promised that it will not happen again.”

“He will be out of the parish and will spend some time to reflect on this past event. He would like to apologize for what happened,” the diocese said.

KUDOS TO THE BISHOP FOR THIS SUSPENSION AND THE MESSAGE IT SENDS TO PRIESTS WHO DO THIS KIND OF THING AND LAITY WHO LIKE IT!!!!!! SPECIAL KUDOS TO THE BISHOP IF HE READS MY MOST HUMBLE BLOG!!!!!
Posted by Fr. Allan J. McDonald at Tuesday, December 29, 2015

A bishop with guts!! Kudos

A Christmas miracle. Finally a bishop who does something about a scandalous priest. The sad thing is that the people loved it and weren't scandalized at all.

Just one question Father. I realize that all of us sin. But why is it that when priests sin they don't commit "normal" sins like everybody else? It's always something incredibly disgusting or criminal. Look at the serial cases of pedophilia.....who does things like that. Or what about the latest one about that priest in New York with the gay for pay bodybuilder boyfriend who wanted to drink his urine! Who does things like that! Can't they just drink or say a few curse words. Why do all these sins of priests have to be so weird and disgusting. I mean really, a grown man acting like a teenage boy at Mass. Aside from the sacraligeous behaviour what grown man acts like a teenager at his job? It's not normal.

Since we are on the absurd and the ridiculous, get this...I am not joking, you cannot make this stuff up...a Jewish religious academic from a university in Maryland says that Eve was created from Adam's penis and not his rib. According to this academic, this explains why human males do not have a baculuum, or penile bone, as do many other mammals. Now, FR. would not let me post the jokes I can come up with about this, but don't you know the feminists are going to love this. This prof better start wearing a bullet proof vest and armored underwear.

I wonder what this academic makes of the snake?

JBS, he probably dreams about the snake at night.

I did notice that the hoverboarding priest's altar had the 'Benedict' arrangement. Perhaps he was using this stunt to 'send up' the Novus Ordo prior to restoring the traditional Mass.

It looked rather bizarre to me. I don't know what the priest was thinking to even consider doing something like this. Didn't it cross his mind that anyone in the congregation with a cell phone could record this? Prior to the Internet it would have been bad enough, but with the world wide web this thing can be viewed, linked, and re-posted by all manner of people many of whom have little or no respect for the Holy Catholic Church. The Church and the priesthood suffer enough disrespect and derision it is.
The Bishop did the right thing in suspending the priest.

Although these hover-boards are apparently a very popular Christmas present this year (who would have thunk it?), they are also apparently a bit of a Greek gift as they have a tendency to overheat, explode, or catch fire. It seems, too, that they are banned in New York and not permitted on roads or pavements (i.e. sidewalks) in Britain. Of 38,000 inspected in the U.K., 32, 000 were deemed unsafe.

The latest in bread and circuses.

Anon 2, my best friend is an ER physician and he says he has already treated numerous hover board injuries, some of them pretty serious. He despises hover boards, four wheelers ("you don't have to see but one beautiful child crushed by one to form your opinion"), motorcycles ("completely unforgiving in accidents"), and skateboards ("an orthopedist's dream come true").

would it be appropriate to say he is "hovering" in a suspended state at the moment?

Yes, he is hovering between heresy and lunacy.