THESE SORTS OF THINGS, EXTREME OR LESS EXTREME, ARE WHAT PUSH TRADITION MINDED CATHOLICS AS IT CONCERNS THE HOLY SACRIFICE OF THE MASS TO DESPISE THE NEW ORDER OF THE MASS AND THE LIBERTIES AND ABUSES THAT PRIESTS TAKE WITH IT! 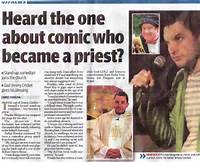 Can you imagine this nonsense taking place in the Extraordinary Form of the Mass. The Traditional Order of the Mass with its strict rubrics, language and solemn spirituality and pious attitudes simply would not allow for this sort of nonsense that happens over and over and over again and in a variety of ways too numerous to list, in the Ordinary Form or non traditional Order of the Mass, with its banal vernaculars, gestures and creativity!

The Ordinary Form of the Mass has come to symbolize a lack of spirituality, piety and reverence, most of all reverence! The sad thing is that the laity enjoy this nonsense and because they enjoy it bishops do not condemn it or suspend the priest who encourages it. But if this priest distributed Holy Communion by way of intinction and the Mass ad orientem and in Latin, there would be repercussions!

I would state emphatically that Mass facing the congregation has turned many priests into entertainers. I think Mass facing the congregation for over 50 years now, is at the root of the majority of the liturgical abuses in the Ordinary Form. It also accounts for the loss of laity to our churches. In the early 1960's almost 90% of Catholics attended Mass every Sunday in the USA; today some places get less than 12% of Catholics attending Mass. The other 88% who don't attend Mass don't take Mass seriously as they have been exposed to all kinds of banal abuses that has denigrated the importance of the Mass for their salvation in their minds and hearts.

Guaranteed there are other things going on with that priest. Guaranteed! A grown man, a grown MAN acting like a teenage kid. Sick.

Why do serious laymen put up with silly clergy?

I hope our pastoral administrator doesn't see this. He might burn himself when his hover board goes up in flames at next Sunday's Mass.

What's a "pastoral administrator"? There's no such thing in the Code of Canon Law.

There are Catholics who continue to believe that their brothers and sisters in the Faith who attach themselves to TLM-only parishes and chapels do so just to hear Latin...or to see beautiful vestments...or for this or that reason.

The video of the priest in this thread is a fine example as to why Catholics attach themselves to the Traditional Roman Mass. They do so as they find that which is difficult to find within the Novus Ordo: That is, the entire ethos of the Mass...the overall sense of Catholicism that abounds within TLM communities.

To borrow from a comment that I posted the other day to Father McDonald's blog...imagine the people sitting in the pews as they watched and heard a priest motor about the church while singing a song. How many of those people who laughed and applauded the priest's antics were inspired to explore the Church's official language of Latin?

How many in the congregation were inspired to explore Gregorian Chant? Did the priest's antics inspire people to go to Confession? Did anybody leave the Mass that day with the goal to explore Traditional Catholic fasting practices? Did women leave that Mass inspired to veil themselves during future Massess?

Answer: Nobody was inspired to pursue any of the above.

The bottom line is that the TLM points to Holy Tradition in powerful fashion. From there, the Catholic who explores (and embraces) Holy Tradition will begin to think and act in a manner that changes his or her life. He or she will acquire a powerful sense of Catholic identity.

Sorry, but the above simply does not flow as powerfully from the Novus Ordo. That certainly does not flow from a Mass that features a priest who motors about the congregation while belting out a song.

That is why Catholics attach themselves to the TLM. Even at a Novus Ordo Mass offered soberly, one will find watered-down prayers, fewer holy gestures and postures by the priest and congregation, and almost always Communion in the hand, altar girls, ad populum vernacular worship...and so on.

The Novus Ordo offers novelties while watering-down Holy Tradition and the sense of Catholic identity. Sorry, but that is just the way that it is.

Speaking of liberties and abuses, not to mention downright heresy, tyler Pope said today that "heaven's gates are open" to atheists who obey their conscience. So, what the Hell. Nothing matters anymore, not the liturgy, not the Mass, not the Sacraments, nothing. So, while you are fretting about the OF, the Pope is destroying the Catholic faith. How ya' gonna' spin this one?

Jbs "parish administrator" or whatever. We are between pastors. Our last pastor left suddenly and we are waiting for another one so we have a retired priest filling in for a few months. I don't know if he's nimble enough for a hover board but "say the black and do the red" was not taught while he was in the seminary.

Gene, what the Pope said is not surprising, it's part of Catholic theology,

No, that is not part of Catholic theology. Catholic theology allows for a "pathway" under certain conditions for non-Christians to salvation. It does not allow for those who reject Christ and God the Father. If that is the case, then why even bother to discuss protestantism and the definition of "extra ecclesium nullum salus."

In Part 3, Article 6 the CCC does indeed stress the necessity of acting according to one's conscience (1790) , which is defined as "a judgement of reason whereby the human person recognizes the moral quality of a concrete act..." However in 1783, the proper formation, or education of the conscience, is considered. Such education is led by the Word of God and prayer, and the authoritative teaching of the church (1785) and leads to an interior prudence in conformity with Divine wisdom. Lacking this guidance, the conscience can make "erroneous judgments about acts.." "blinded through the habit of committing sin," leading to "a mistaken notion of autonomy of conscience." So what about the atheist? He lacks the guidance of the Church but nevertheless must act according to his conscience. If he acts against his conscience he condemns himself (1790) but without the careful formation in conformity with the "interior law" (1784) he will necessarily commit evil (1793), though the issue of "invincible ignorance" is raised at this point. Atheism is taken up again in 2123-2126 as a very serious sin (2125). So for heaven's gates to be open to the atheist who follows his conscience would appear to require a great deal of qualification, to say the least.

The Church seems a bit weak on concupiscence. I'll take Augustine and Calvin.