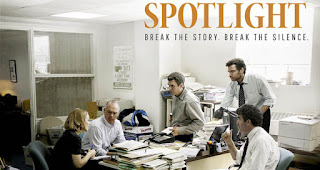 Our parish seminarian is with us for the Christmas holidays. At supper last night I asked him if he had seen "Spotlight" the movie concerning the sex abuse of minors by clergy in Boston.

He said he did and that he liked it and that it should be a must-see for seminarians and clergy.

He said that it presented the whole scandal in a fair and balanced way to include looking at the culture in Boston that refused to acknowledge the elephant in the room, which also included the Boston Globe.  It implicated police, lawyers, judges and politicians in the cover up and also reporters and not just the institutional Church.

It also pointed out that not only did the Church (meaning the bishops, but Catholics in general who are a part of the Church, by the way) want to hush this but also many victims and their parents. They didn't want a public free for all concerning their children and were happy with settlements that included nondisclosure clauses.  Teenagers themselves, at the time, didn't want others to know what had happened because of the stigma associated with homosexual sexual abuse.

So, even the Boston Globe was late in reporting this as it began in 2000 or so. However, the Bishops of the USA where publicly speaking about this prior to the Globe's spotlight review in their televised national meetings on EWTN. And of courese we know that the National Catholic Reporter did an expose on it beginning in the early 1980's and continuing through the next two decades.

How the Irish culture's repressive attitudes (puritanical/Jansenist) towards sex and silence about it played into this has not been well studied. Keep in mind, that Catholicism in the northeast (New England) is primarily Catholicism of Irish immigrants.  I think there is a higher occurrence of sexual abuse and secrecy concerning sex in general and not dealing with the elephant in the room in Irish culture and cultures more repressive when it come to sex, seeing sex as dirty and the dirtiness of it the erotic element. Sounds like our pop culture concerning sex today and the pornographic elements of it so much a part of people's lives today.

I was emailing one of the important reporters on the Boston Globe at the time (we had a nice email relationship) and I told him that the Boston Globe was way behind the Catholic Church in reporting this, by missing what the Bishops were discussing on national TV at their meetings and what the NCR had reported.

The Boston Globe hasn't learned much from this as their culture of silence concerning sexual abuse in venues apart from the Church, such as in the family and in public schools is not reported at all.
Posted by Fr. Allan J. McDonald at Wednesday, December 23, 2015

Power + secrecy ALWAYS breeds corruption. In business, in government, in non-profits and in religion.

"An Open Secret" is an even more compelling film, because the cover up by Hollywood for its sex abuse of minors is still going on, and makes the Bishop's efforts look like amateur hour by comparison. https://en.wikipedia.org/wiki/An_Open_Secret

Do you know what an Irish homosexual is? A man that prefers women over whiskey.