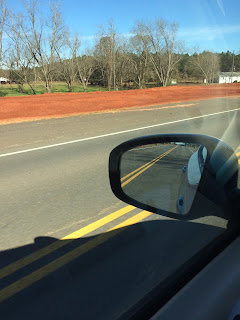 It's Fall Line. It's not "symbolic" of anything.

"The fall line is a geological boundary, about twenty miles wide, running northeast across Georgia from Columbus to Augusta. It is a gently sloping region that rapidly loses elevation from the north to the south, thereby creating a series of waterfalls. During the Mesozoic Era (251-65.5 million years ago), the fall line was the shoreline of the Atlantic Ocean; today it separates Upper Coastal Plain sedimentary rocks to the south from Piedmont crystalline rocks to the north. The fall line’s geology is also notable for its impact on early transportation in Georgia and consequently on the state’s commercial and urban development. Rivers that flow across the fall line create waterfalls or rapids, which give the “fall line” its name. The geologic regions to the north of the fall line include the Appalachian Plateau, the Valley and Ridge, the Blue Ridge, and the Piedmont. The Upper Coastal Plain and Lower Coastal Plain regions occur south of the fall line."

"Divorce rates are higher in the Bible Belt than in liberal bastions like New York City. So says the U.S. Census Bureau, whose first-ever analysis found that marriages are more likely to make it in New York or New Jersey than in socially conservative states like Oklahoma, Georgia or Alabama."

Liberalism declines rapidly once you get out of Atlanta and into North Georgia, a very conservative region. If God was going to give the world an enema, he would plug in at Atlanta.

one should also consider the marriage rate. me thinks maybe a lot more non married cohabiting in NYC than the bible belt.

Speaking of Christmas Day, will Confession be available for those seeking before the 8 and 10 a.m. Masses? I am a Christmas Day Mass-goer. Respectfully, Seeking Confession.

The Fall Line "Freeway" (really, a two-lane state highway being widened to four lanes) will connect Columbus, Macon and the future Diocese of Augusta. Certainly Father M. before you retire in 15 or 20 years, you will petition to create that diocese from the state's two existing ones. Atlanta's diocese is getting very large (in population) while Savannah is spread out over tens of thousands of square miles. Less driving for our state's two diocesan bishops. I would run it northwest to Athens, west to Lake Oconee and over to Statesboro. The cathedral would be a certain parish currently on Telfair Street in Augusta...

It must be the gnats.


"During the Mesozoic Era (251-65.5 million years ago), the fall line was the shoreline of the Atlantic Ocean."

So where Macon is located was at that time beach front property.

That must of been some kind of global warming during that time period. I wonder what was generating all the CO2 emissions back then?

George - It was tectonics, not CO2 levels. "Sea levels began to rise during the Jurassic (200 million years to 145 million years ago), which was probably caused by an increase in seafloor spreading. The formation of new crust beneath the surface displaced ocean waters by as much as 200 m (656 ft) more than today, which flooded coastal areas."

My comment was meant to be humorous. As you point out, there are other natural processes that can cause a rise in sea level besides increases in CO2 levels. How much carbon dioxide levels contribute to temperature variations versus solar activity cycles is still a matter of dispute though. At least to my understanding of what I've read. It's become a big issue today.
As far as tectonics, you say "was probably caused by an increase
in seafloor spreading." What is the scientific consensus of the probability that that is what the cause was? What caused the water to recede the 170 miles or so to where the shoreline is now?

"What caused the water to recede the 170 miles or so to where the shoreline is now?"

"During the earliest Paleozoic Era, the continent that would later become North America straddled the equator. The Appalachian region was a passive plate margin, not unlike today's Atlantic Coastal Plain Province. During this interval, the region was periodically submerged beneath shallows seas. Thick layers of sediment and carbonate rock was deposited on the shallow sea bottom when the region was submerged. When seas receded, terrestrial sedimentary deposits and erosion dominated."

And "During the middle Ordovician Period (about 440-480 million years ago), a change in plate motions set the stage for the first Paleozoic mountain building event (Taconic orogeny) in North America. The once quiet, Appalachian passive margin changed to a very active plate boundary when a neighboring oceanic plate, the Iapetus, collided with and began sinking beneath the North American craton. With the birth of this new subduction zone, the early Appalachians were born."