CONSTRUCTIVE, RESPECTFUL CRITICISM OF POPES AND BISHOPS IS ALLOWED--ONE WON'T BE EXCOMMUNICATED (AT LEAST I DON'T THINK SO, BUT IF YOU GET EXCOMMUNICATED DON'T BLAME ME!) 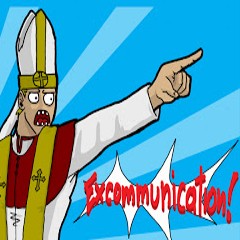 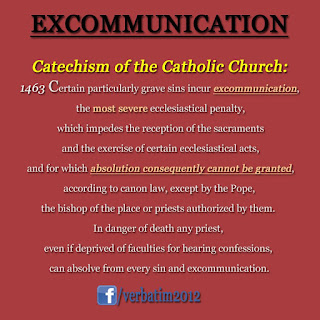 Pope Benedict was often criticized in and outside of the Church. A couple of times he apologized for a gaff or two or not being as clear as he ought to be. Usually it was progressives who were the most ugly toward Benedict.

The opposite is true today, conservatives and neo-traditionalists attack Pope Francis and in a similarly ugly way. I guess original and actual sin is an equal opportunity reality!

No one from the curia implied though, as far as I know, that progressives should be excommunicated for criticizing Pope Benedict. It appears that Archbishop Fisichela has implied it for conservative, neo-traditionalists in the Church--not a good thing since he is in the curia.

So here is a good rebuttal of it and very respectful I think from the Catholic Herald in Great Britain:

The Pope is only infallible when speaking on faith and morals, ex cathedra

Some years ago now, I used to sit in the aula of the Gregorian University and listen to the lectures of Don Rino Fisichella, a Roman priest, who lectured on the credibility of Revelation. He was a stimulating lecturer, though he sometimes got carried away, I seem to remember.(My comment: As an Italian, I would let Fr. Alexander know that it is perfectly fine for an Italian to get carried way even when they reach high office. Hotheadedness is an Italian virtue! It is fun to watch also!)

He is now an Archbishop and in charge of the New Evangelisation, and he seems to have got carried away again, suggesting that to criticise the Pope is the equivalent of a physical attack on him, which carries the penalty of automatic excommunication. In fact, a distinguished canon lawyer explains that this is simply not the case.

The Church has been here before. In the period of the Italian Risorgimento, the Piedmontese state made war on the Papal States, eventually driving the Pope out of Rome and making him the prisoner in the Vatican.

This act of unprovoked aggression (which was supported by Britain, sadly) led to a canonical debate: was this an assault on the person of the Holy Father, and if so, by whom, and who was excommunicated as a result? Minimalists thought that King Victor Emmanuel and Camillo Cavour, who had led the war on the Pope, were excommunicated; maximalists took the view that anyone who made common purpose with them, which included the common soldiers and most of the Italian population, were also excommunicated.

One thing is for sure: Cavour and Victor Emmanuel were both reconciled to the Church on their deathbeds. They both knew that to die excommunicated from the Catholic Church was to imperil their immortal souls, and so were taking no chances. It is said (at least Augustus Hare reports it in his Walks in Rome) that the Blessed Pius IX himself wished to rush to the deathbed of King Victor Emmanuel, to reconcile him personally, but was forcibly prevented by the Jesuits from doing so. It may not be true, but it is certainly a good story.

So, it is nice to know that anyone who speaks critically of the Pope is not risking their immortal soul and excommunication latae sententiae. But perhaps Archbishop Fisichella’s remarks are a defensive reaction to the rising tide of criticism directed at the Holy Father. If so, this anxiety is surely misdirected. The Pope has asked for bold speaking, or parrhesia. Moreover, the Pope is a Jesuit, that is a member of a religious order, in which fraternal correction is quite usual. It is surely in this light that matters like this open letter to the Holy Father should be read.

But how can someone who is infallible be subject to fraternal correction, you might well ask? But to ask that is to presuppose a maximalist position on Papal infallibility that many attribute to the Church, but which the Church has never held. The Pope is only infallible when speaking on faith and morals, ex cathedra. He is not infallible when speaking, for example, on economic matters, or scientific matters such as climate change.

It is perfectly acceptable for a good Catholic to interrogate the words of the Pope that are uttered in non-ex cathedra situations, whether it be mid-air press conferences, or unrecorded interviews published by nonagenarian journalists, as well as that now notorious Christmas address to the Roman Curia.
Posted by Fr. Allan J. McDonald at Thursday, December 10, 2015

I think any of us are infallible when it comes to the faith and morals of the Church when we teach Catholic dogma. For example when Pope Francis spoke of the Immaculate Conception, his teaching is infallible in the homily insofar as he is quoting the dogma as taught by Pope Pius in 1854 which was an "ex cathedra" teaching.

To declare something a dogma that currently is a doctrine but not clearly defined as an infallible teaching takes an "ex cathera" teaching from the pope alone. Councils in union with the pope can teaching infallibly also but it has to be declared dogmatic. So prior to 1950, The Assumption was a doctrine but not a defined dogma as was the Immaculate Conception prior to 1854.

On the one hand, you show very little interest in the clergy, on the other hand, you criticize a clericalism which is more of a phantom than something that is real. One cannot compensate for this lack of interest with a good intention or with statements in front of smaller groups. The bishops and priests have to know again that the pope stands behind them when they defend the Gospels “in season and out of season,” even if it is done in a way that does not personally please the pope. It is not good that some think that the pope sees many things quite differently from the Catechism, and that others then imitate him in order to make a career under this pontificate. As a pope, you of necessity have to serve the continuity and Tradition of the Church – even non-Catholic Christians are of this opinion. It may well be better for you to cut back on your innovations and provocations; we anyway already have many people who do that. Your Magisterium, as such, is already in itself the ultimate provocation and innovation – after all, you are the Representative of Christ and the supreme teacher of our supernatural Faith. “Grace, Mercy, and Peace” are coming “from God, the Father, and from Jesus Christ, the Son of the Father, in Truth and Love” (2 John 1:3); and they only come together in a complete package. If, during this coming Year of Mercy, you are now preparing yourself for Christmas, please take this occasion as an incentive to find out for yourself what you have yourself neglected in the recent past. Let yourself be helped by your own employees who will only learn from you if you are willing to learn something from them. Like me, many others have difficulties with the way you sometimes talk and act. But that can be fixed, if it becomes clear that you listen to what others have to tell you. Unfortunately, I know that you are not yet capable of dealing well with such criticism – that is why I do not put my name on this letter. I want to protect my superiors against your wrath, especially the priests and bishops with whom I have worked for many years in Rome and from whom I have learned so much. You might want to work on taking away such fears – from me and from others – or, even better, to make such letters as this one superfluous, namely, by learning something from others.

In this spirit, may you have a blessed and contemplative Season of Advent!"

The rest of the letter can be read here:

Well then all of those people who signed the petition for Francis to amend his ways or leave have excommunicated himself. What a farce, this guy is trying to turn critiquing the disaster than is the Francis papacy into something akin to blaspheming the Holy Spirit, that in itself is idolatry of person.

The 'open letter' encapsulates all the issues that well-informed and concerned Catholics have concerning this pontificate. Whether it was written by a former curialist or a journalist is immaterial. I suspect the latter.

The tragedy for the Church is that a Pope like Francis causes desperate people to do desperate things. The history of the reformation in the 16th century was preceded by countless efforts (not all well conceived or intended) to reform the Church from the Pope down to the laity but due to lack of foresight and good will on the part of the various factions nothing was accomplished to prevent the coming many decades to avert the tragedy. The Popes of the time were mainly to blame for the tragic results. The powers bee seem to have learned nothing from history. The forces of destruction, fired up with pride and motivated by resentments against Vatican Council I (still unfinished?) assembled for Vatican II to reverse the work of Vatican I and Trent as much as they could. Some went along only to update the Church but the real movers and shakers wanted to do away with Tradition to put the magisterium on a path toward Modernity. Unless something happens to retard the rate of devolution nothing of worth will remain.

Liturgy is the most urgent issue in need of attention. It is in great need for rebalancing to correct the train wreck committed in the name of V-2. This time I hope we go back to Tradition and rectify the mistakes of the last 50 years. Other issues are also important to work on I am sure. However, as a simple sinner in the pews I am looking to once again to be able to engage in community prayer with fellow Catholics that is reverent and worthy of offering because it is the best we have to offer.

The latest from the Vatican is that Catholics should not try to convert Jews. My question is: is there now any reason to remain Catholic?

What say you now Mark Thomas?

Jan, even in pre-Vatican II times we were told not to try to convert anyone but to make the Catholic faith attractive to people by the manner in which we lived our lives, especially through our charity towards people (love). We were not to wear our religion on our sleeve. In the south, priests were very clear that Catholic spouses or fiance's should not try to convert their non-Catholic spouses/fiances. This is something they should want to do.

I have never seen any Catholic priest or parish target Jews or Protestants for conversion. We have had ads in the paper inviting people to consider becoming Catholic but we don't put anyone down to encourage them to leave their religious tradition.

This document is very sound.

Fr McDonald, unfortunately, what you were taught is certainly different from what I as a pre-Vatican II Catholic was taught at school and heard from the pulpit. I am not surprised, though, because America was already ahead of most other countries and was in the vanguard of those pushing to modernise the Church before Vatican II. While it is true that we shouldn't be going door to door, or preaching on street corners, at the same time it is our duty to pass on the Faith and encourage others. Haven't you ever heard, for example, of the Miraculous Medal and the miracle conversions that were wrought through that? The most famous being a Jew, Alphonse Ratisbonne. If what you say was correct then those miracles would not have occurred. Our Lord Himself told the apostles to go forth and convert the nations. Why are you telling us something different?