BLESSED MOTHER TERESA OF CALCUTTA IS A SAINT!

I was pastor of the Church of the Most Holy Trinity in Augusta when Blessed Mother Teresa of Calcutta died. Augustans loved Mother Teresa as they did Saint Pope John Paul II. We had a special Memorial Mass for Mother Teresa at 12:15 PM and 700 Catholics came to downtown Augusta to pay their tribute and remember Mother. This photo taken by the Augusta Chronicle of the Mass was prior to our restoration of the church which would shortly be completely scaffolded. The three oldest windows in the Church above the altar dating back to 1863 had been removed for restoration. Blue screens were placed over them to keep the sun and daylight from blinding the congregation. In the photo you will note that the nave and sanctuary are completely carpeted. After this Mass, all the carpet was removed revealing the marble tile floors in perfect condition. Georgia marble placed in the Church in the 1860's! New carpeting was not reinstalled!

This was the photo and story as it appeared on the top front page of the Augusta Chronicle on Tuesday September 9, 1997. The Mass had been on Monday the 8th at 12:15 PM: 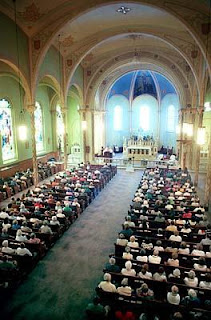 About 700 people packed Augusta's Catholic Church of the Most Holy Trinity on Monday, September 8, 1997 at 12:15 PM to show their devotion to Mother Teresa of Calcutta who died on Friday, September 5, 1997.

During communion, worshippers filed past a photograph of the nun, mounted on a stand draped in white. A simple bouquet of white baby's breath lay before it on the floor.

In the picture, Pope John Paul II assists a smiling Mother Teresa as she walks down steep but shallow steps. She wears a dark sweater over her sari. And except for sandals, her feet are bare.

In her photographs she always looked frail and hunched over, said Elizabeth Funsch, who saw Mother Teresa in June in New York. But in person, she didn't look frail, she had big bones, Ms. Funsch said.

"She was not what I expected, she looked very strong, even in a wheelchair. She looked like she could deal with a lot of stuff," Ms. Funsch said.

Her ministry was not just to Roman Catholics but to all people in need, regardless of their creed or race, said the Rev. Allan McDonald, pastor, in his homily.
"Mother Teresa saw the good and sacredness of each and every person no matter where or who they were." he said.

"Many would say that she is a saint because of her great works," he said. They would point out the Congregation of the Missionaries of Charity that she founded, which numbers today more than 5,000, or that she gave the sick poor of Calcutta a place to die with dignity, he said.

Some would say that she was a saint because she stood before President and Mrs. Clinton, who are pro-choice, and said that abortion is the greatest violence against humanity that the world has even known, he said.

Some might point to the hospices she started for AIDS patients when this disease was most misunderstood.

"Many of its victims were abandoned by family and friends out of fear of contagion or ignorance or prejudice," he said.

She knew, however, that salvation and becoming a saint rests with God alone and is a gift, said the Rev. McDonald. Nothing anyone could ever do in this life would ever be enough to gain salvation, he said.

"Mother Teresa gave her life for Jesus and for the church, not for earning her sainthood or salvation, but as a powerful testimony to her gratitude, to her thankfulness for the great things that Jesus accomplished for her and all humanity," he said.

Those who came left the church quietly.

Pamela Sherlock of North Augusta had never read Mother Teresa's books but came to show her devotion to her, she said.

Fran Sloan of Augusta also came to pay her respects.

"I think she is a good example of how all us Christians should act," said Ms. Sloan, a Catholic. "I just wanted to show my respects. It is really a joyful occasion, I know she is in Heaven," she said.

From Vatican Radio this morning:


Blessed Teresa of Calcutta to be made a Saint


(Vatican Radio) Blessed Teresa of Calcutta is to be made a Saint. Pope Francis on Thursday authorized the Congregation for the Causes of Saints to promulgate a decree regarding a miracle attributed to the intercession of Blessed Teresa (nee Agnes Gonxha Bojaxhiu).
Blessed Teresa, known around the world as Mother Teresa was born August 26, 1910 and died September 5, 1997. She was foundress of the Congregation of the Missionaries of Charity and the Missionaries of Charity.


The Pope’s approval for these decrees came during a private audience with Cardinal Angelo Amato SDB, prefect of the Congregation for the Causes of Saints.

I must say I don't like this rushing to canonise people so quickly. Much as I like John Paul II, it was unseemly to canonise him so soon, and as for beatifying Paul VI--well, don't get me started.
But I think I could make an exception for Mother Theresa. She came to our graduation at Harvard in 1982, which was jolly decent of her.
Fortunately, the rush to canonise Princess Diana, who died the same summer as Mother Theresa, seems to have stalled.

I don't think it was unseemly to canonise St John Paul The Great so soon. For one thing, we don't know how long the world as we know it will go on. We may not have the three or four hundred years that it has taken to canonise some saints.

I read some people were complaining that St John Paul The Great canonised too many saints, so I had a look at who he had canonised. Many of them were, like Blessed Mother Teresa, regarded as saints in their life time because of their care of the sick, etc. It should not have taken hundreds of years to be canonised so that now very few Catholics would know why these people are saints and what they did. I think St John Paul The Great recognised that we need role models to build up our own faith and who better than the saints. That is one of the reasons I think he was so great. He knew what the world needs: the Blessed Sacrament, Our Lady and the saints.

Two miracles are required for canonisation and if these miracles occur then I think it is better to canonise sooner rather than later because people can relate to these saints better because they knew of them - they knew what they did and so can try to emulate them. No good waiting for hundreds of years when people won't be able to relate to them as people now do to Blessed Mother Teresa and St John Paul The Great. Two great saints of our time!