COMMON SENSE PREVAILS IN THE RUBRICAL DIRECTORY OF "DIVINE WORSHIP--THE MISSAL" AND NOW WE NEED THIS SAME COMMON SENSE IMMEDIATELY, IF NOT SOONER, IN THE ORDINARY FORM MISSAL OF THE LATIN RITE! 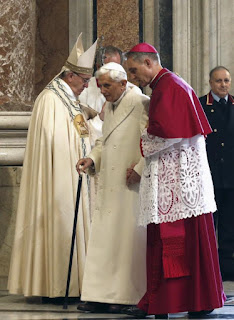 The celebration of Mass for use by the Personal Ordinariates has a wonderful "Rubrical Directory." It could easily be adapted for the reform in continuity with the 1962 Missal of the Third Typical Edition of the Roman Missal.

This  blueprint for the reform of the rubrics of the Ordinary Form Missal and could be accomplished overnight. There are only 49 paragraphs to this section of the missal.

Here are some of the more pertinent ones that could and should be implemented in the Ordinary Form Missal:

#10: The rubrics of the Divine Worship Order of Mass aim to preserve traditional customs of Anglican Eucharistic worship with respect to orientation, postures, gestures and manual acts, while also permitting the celebration of Mass in a manner similar to that of the Roman Missal, Third Typical Edition. This rubrical flexibility provides for the variety of liturgical traditions and experiences among the parishes and communities of the Personal Ordinariates.

My comments on #10: The Addendum to our Third Typical Edition could be phrased for normal Latin Rite Catholics in the following way: "The rubrics of the addendum of the Roman Missal aim to preserve traditional customs of Catholic Eucharistic worship in the Latin Rite with respect to orientation, postures, gestures and manual acts...."

Of course this would allow for the PATFOTA, the reorientation of the greeting to the point prior to the Collect and the use of ad orientem exactly as it is in the traditional form of the Latin Rite, now called the Extraordinary Form.

#11: ...The Mass celebrated with more solemnity should also include the ministrations of one or more Deacons assisting the Priest, each according to their roles. In the absence of a second Deacon, another cleric or even an Instituted Acolyte may serve the subdiaconal ministry and read the Epistle.

My comment on #11: Bring subdeacons back. We have for the EF Mass and either a priest or another deacon fulfills this role. A priest should be able to wear a dalmatic to function as a deacon at Mass because a priest is first a deacon!

#22: ...The proper Gradual and Alleluia may be replaced by the Responsorial Psalm and Alleluia of the (Roman) lectionary....

#31: Divine Worship provides for two forms of the Offertory, a fact which respects a divergence in Liturgical experience among Ordinariate communities. The first form of the Offertory is drawn out of the Anglican Missal tradition while the second form reflects the Roman Missal as revised following the Second Vatican Council. The choice of the Offertory form should respect the overall shape of the liturgical celebration, such as the distinction between Sunday and weekday Masses, and it is made within the context of the particular tradition of a parish or community of the Ordinariate.

My comment on #31: (The Third Edition Addendum for the OF Missal could read as follows): The revised Third Edition of the Roman Missal now provides for two forms of the Offertory, a fact which respects the liturgical experience of the Latin Rite Mass celebrated in its Extraordinary Form in Catholic communities. The first form of the Offertory is drawn out the Latin Rite Missal tradition while the second form reflects the Roman Missal as revised following the the Second Vatican Council. The choice of the offertory....

My comment on #32: This is a no-brainer for the Latin Rite Third Edition of the Roman Missal--it is our patrimony to see the Roman Canon as the norm on Sundays!

#37: Following the Fraction...The response, Lord I am not worthy..." may be said one or three times.

My Comment on #42: Since what is recommended is a concluding devotion and thus separate from the Mass itself, as is the Rite of Sprinkling in a technical sense as described above, the normative Latin Rite could do this beginning today and not be illicit about doing it!

My final comment: Cardinal Robert Sarah and Pope Francis do these Liturgical restorations for the Normative Latin Rite Mass ASAP!!!! or at least give permission to those parishes which celebrate both forms of the one Latin Rite to do it today!

There's a priest in North Carolina whose parishioners are petitioning Rome for his removal, and one of their major complaints is his effort to "restore" the Roman liturgy. NCR identifies his liturgical efforts as part of a "restorationist" movement among younger priest. I just wonder how much of a threat this sort of petitioning will pose in the future, given the present climate of the Holy See, and whether the New and Improved Vatican will participate in purging priests like this one.

Most Anglicans throughout the world today have a large variety of eucharistic prayers to choose from. That same choice should be permitted for clergy of the Anglican Ordinariate and not just the Roman canon and EP II.